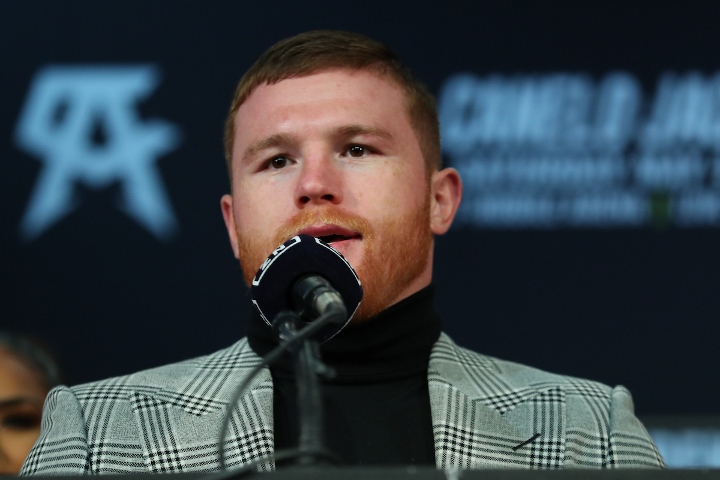 Canelo Alvarez (51-1-2, 35 KO’s) and Daniel Jacobs (35-2, 29 KO’s) kicked off their mega fight press tour in New York with plenty of fans in support of both. Canelo being the most popular fighter in the sport and Jacobs being from New York.

The fight will take in Las Vegas on May 4th at the T-Mobile Center on the DAZN streaming platform.

Many are considering this the biggest fight to date in the new platform especially since the signing of Canelo to a historic 11 fight, 365 million dollar deal.

Canelo for the most part has taken on the very best when possible so this fight with Jacobs was no different.

“This is a fight that just recently started being talked about,” Canelo told BoxingScene.com

“Style are different. These are the type of fights I’ve always wanted and that’s why I’m here. He’s a great fighter. I think at this level, we can adapt to whatever style especially to his style. His style can complicate anyone.”

Through negotiations, it was revealed that there is a next day weigh-in in the morning where both fighters cannot weigh above 170. In the past the IBF rules dictated that rule.

However, after Jacobs’ fight with Gennady Golovkin – where Jacobs refused to weigh-in the day after and did not fight for the IBF belt – the IBF dropped the rule for unifications which this fight is.

Canelo hold the WBA and WBC while Jacobs holds the IBF version. Canelo however says it was not something I requested.

“It was not something I requested,” stated Canelo.

“It was a rule of one of the sanctioning bodies. It’s not really my concern; the IBF which Jacobs is defending. My job is to train and defend myself.”

Later Golden Boys matchmaker, Robert Diaz stated, “It’s still an IBF rule. On unifications it’s up to the discretion of fighter. It’s the same day of the fight and they can weigh whatever they want after.”