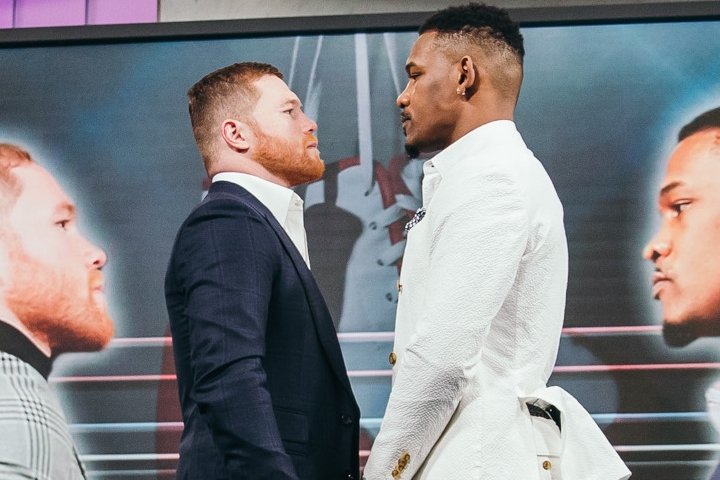 The two world champions will collide in a highly anticipated unification on May 4th at T-Mobile Arena in Las Vegas. The DAZN streaming service will carry the fight.

“This fight represents a miracle, it’s funny because it’s my nickname, they call me ‘Miracle Man.’

“It’s not strange for people that I had cancer and come back after that it represents a lot more now, I think now I understand what my life and career represent –  which is hope, inspiration, with a victory in this fight I will not only inspire many, but many will feel like champions because they are reflected in my career,” Jacobs told ESPN Deportes.

Canelo has never been down as a professional and he’s rarely been seriously hurt.

But Jacobs believes that he’s fully capable of knocking Canelo out cold or stopping him inside the distance with a TKO victory.

“If I beat Canelo without any controversy, I will be close to reaching my dream of being a legend and future member of the Hall of Fame,” Jacobs said.

“One hundred percent, I feel like I can knock out Canelo or stop him, beat him by technical knockout. Canelo has had strong opponents, tall opponents and talented opponents, but he never had all three in one night, and that’s what he’s going to have against him in the fight with me.”

Jacobs is hoping that a victory over Canelo will stamp his name in the history books as one of the greatest middleweights of all-time like Sugar Ray Robinson, Jake LaMotta and others.

“Just thinking about it makes my skin crawl, I have a lot of respect for all those fighters you mentioned and it would be an honour to put my name on that list of great 160-pounders,” Jacpbs said.