The undisputed heavyweight clash between Anthony Joshua and Tyson Fury is set to take place in Saudi Arabia this summer, according to reports.

Talks have been continuing in recent weeks over a date and venue for the huge fight, and Joshua’s promoter Eddie Hearn revealed that both sides had agreed on a site offer for the bout.

While he did not confirm what country that was, Talksport report that the super fight will likely take place in Saudi Arabia, with a fight date to follow soon. 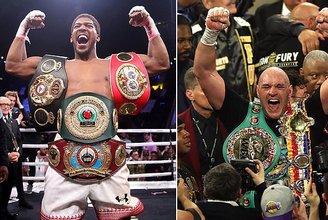 That would see Joshua return to the country where he avenged his shock defeat to Andy Ruiz Jr, with a comprehensive win on points in 2019.

‘What’s been agreed is that both Anthony Joshua’s camp and Tyson Fury’s camp want to fight in Saudi Arabia,’ Mark Kriegel told Talksport.

‘Saudi Arabia was the frontrunner from the beginning, and that’s where everybody wants to go now.

‘It’s not real until someone under the auspices of the Saudi government puts money into escrow.

‘Both sides have yet to sign – this is a crucial document – a memorandum of understanding.

‘I’ve had several sources tell me today that they’re, “waiting for the paperwork from Saudi”.’

Saudi Arabia, Qatar, Uzbekistan, Russia, America, Singapore, China, the United Arab Emirates (UAE) and England had been among the options considered to host the mega fight.

However, the slim chances of British stadiums being allowed to welcome a capacity crowd in the summer meant it was unlikely that fight was going to take place domestically.

Speaking to Behind The Gloves, Hearn revealed a meeting with Fury this week confirmed to him that the fight was going ahead.

‘Both sides have approved the site offer that they want to go with, and now we’re just finalising the site deal and we’re in a great place,’ Hearn said.

‘I saw Tyson yesterday. I just messaged him and said, ‘I’m in Vegas, I’m in your hotel if you fancy a cuppa’.

‘We just had five or 10 minutes together and it was good, because I don’t represent Tyson Fury, so I don’t know what is in his mind. What he basically cemented in my mind was, this is the only fight he wants, and I know that’s the same with AJ.’