Usain Bolt starts the countdown to his retirement in the men’s 100m heats while Laura Muir runs in the 1500m heats. The showpiece of the opening day is Sir Mo Farah’s 10,000m final as he bids to sign off from the track in style.

How can the Jamaican be ignored? It will be his swan song after a glittering career, and Bolt is expected to bow out in style. The eight-times Olympic champion is at home in the capital having defended his 100m and 200m Olympic titles in London in this stadium five years ago. This time he will look to retain the 100m and 4x100m golds he won in Beijing two years ago. He will not defend his 200m crown. Athletics will not be the same without Bolt, so dominant since hisfirst Olympic triumphs in Beijing nine years ago, and he will want to go out with a bang.

Bolt looks to complete the first of his goals in the 100m final while Katarina Johnson-Thompson begins her heptathlon challenge and Muir is due to run in the 1500m semi-final.

With the retirement of Jessica Ennis-Hill and Canada’s Brianne Theisen-Eaton, Johnson-Thompson is hoping to win her first world medal in the heptathlon. She set a new British record of 1.98m in the long jump at the Olympics last year before tailing off and finishing sixth. But she moved to France earlier this year to work under new coach Jean-Yves Cochand in Montpellier. 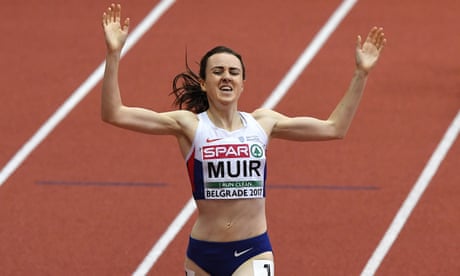 Johnson-Thompson returns for the culmination of the heptathlon,European indoor champion Andrew Pozzi begins his 110m hurdles bid and Asha Philip will aim to reach the women’s 100m final which rounds off the evening on the track.

Muir is likely to battle Faith Kipyegon and Genzebe Dibaba for a 1500m medal in the final at 9.50pm after her seventh place at the Olympics last year.

The American has made a comeback from a kidney transplant in 2015 and returns to the London Stadium for a major championships for the first time since winning Olympic gold in 2012. The 32-year-old remains the world record holder for the 110m hurdles – clocking 12.80sec in 2012 – and won his Anniversary Games race in July. It followed his Diamond League victory in Rome and he will be aiming to top the bronze medal he secured in Beijing two years ago – just four days before his kidney surgery. Merritt has gradually got quicker since his comeback and his season’s best of 13.09 is the joint fourth fastest in the world this year.

Wayde van Niekerk will look to successfully defend the 400m title while there will be British interest in the opening rounds of the 200m featuring Nethaneel Mitchell-Blake, Danny Talbot and Zharnel Hughes.

The defending champion after his breakthrough gold in Beijing two years ago, Van Niekerk’s performance in Rio last summer demanded even more attention when he broke Michael Johnson’s 400m world record which had stood for 17 years with a time of 43.03sec to take his first Olympic gold. Few would bet against him winning another world title, while Britain’s Martyn Rooney will be hoping to make the final after his disastrous Olympics when he bowed out in the heats, as will Matt Hudson-Smith.

The men’s 200m semi-finals take place – although Bolt will not be involved – while the women’s 400m final rounds off the evening, and Mo Farah will be on the track in the opening round of the 5,000m he is looking to win for the fourth time.

The defending 400m champion is the fastest woman in the world over the distance this year. Felix, a six-times Olympic champion and the joint most decorated woman in Olympic track and field history, set a new world lead time for the year in London in July by clocking 49.65 at the Anniversary Games. She surpassed the previous best time this year of 49.72 set by fellow American Quanera Hayes. It could be 31-year-old Felix’s final world championships – she has already won nine golds, four of them individual and five in relays.

The 24-year-old is set to be one of the leading lights of the summer after herdouble European indoor gold in March. Muir blitzed the field in Belgrade to take the 1500 metres and 3,000 metres crowns, her first senior titles. She is eyeing wins in the 1500m and 5,000m here after her victories earlier in the year convinced her to try for the double, having shaken off a disappointing seventh place in the 1500m final in Rio.

The women’s 200m final ends the day’s competition with Dafne Schippers one of the favourites, while the day also includes the final of the women’s long jump and 3,000m steeplechase.

Schippers will aim to defend the 200m title she won in Beijing two years ago in a personal-best time of 22.63. Schippers finished second behind Elaine Thompson at the Anniversary Games in July, as she did in the Olympic final in Rio last year. With the Jamaican not running the 200m, the Dutch sprinter will be aiming to strike gold again.

Farah runs in the 5,000m final as his track career edges to a close and the men’s 4x100m relay also takes centre stage in what should be Bolt’s final race. 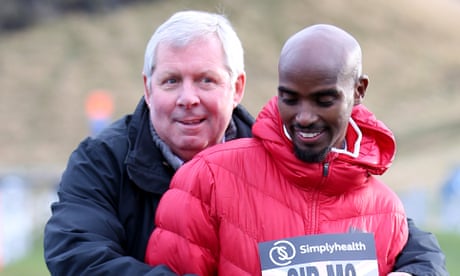 All eyes will be on Farah as the five-times world champion retires from the track to focus on road racing after these championships. The scene is set for the 34-year-old to go out on a high at the scene of his first two Olympic gold medals in 2012. His double defence in Rio last yearcemented Farah as one of the world’s best ever and having done the same in Beijing a year earlier he has now not been beaten in a global final since the world championship 10,000m in 2011.

The final day and the final chance for Muir to add to her European Indoor medals from Belgrade, in the 5,000m. The women’s 800m final and 4x400m men and women’s relay finals end the championships.

Although the South African has doubled up in the 1500m, it is the 800m where she is expected to excel having returned to form to take gold in Rio last summer. She already has two world golds in this event, won in Daegu in 2011 and in 2009 when the then 18-year-old stunned the athletics world with her victory in Berlin. However, she then spent almost a year off the track following the furore that surrounded the gender test she had been asked to undergo during the world championships, a controversy that has continued to dog the 26-year-old throughout her career.