With the World Boxing Council (WBC) lightweight title now up for grabs, the team behind top-rated contender Luke Campbell has already begun making plans to fill the void.

The Brit’s place as first in line is well-secured; attempting to dictate whom he faces, however, is leaving his team grasping a little too far beyond reach.

Campbell’s promoter, Eddie Hearn has casually discussed plans for his client vying for the WBC lightweight strap recently vacated by Mikey Garcia. A vacant title fight still has to be ordered, which comes with the process of finding the two highest-rated available challengers to contend for the crown. 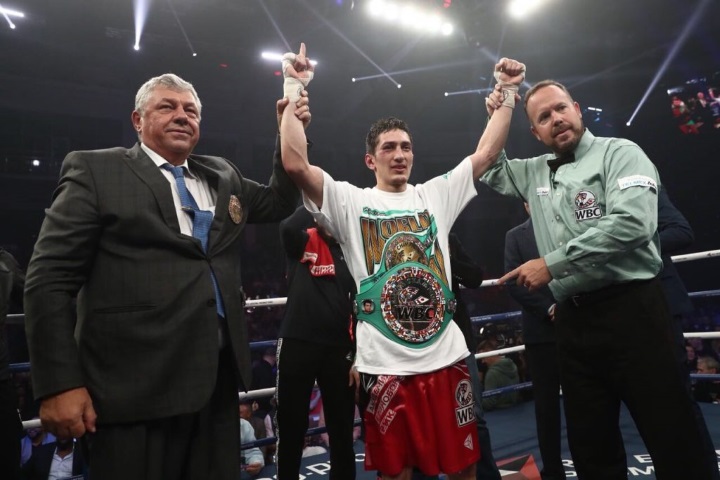 Hearn’s Matchroom Boxing already promotes the top-rated contender in Campbell. Its USA arm has recently signed unbeaten Devin Haney, who is ranked number three by the WBC and with his Matchroom debut to come May 25 live on DAZN versus Antonio Moran.

It makes sense that, with a win Haney could next face Campbell in a fight that would be easy to make since both are with Hearn, right?

Not if you ask Zaur Abdullaev, the unbeaten lightweight from Russia who is ranked directly in between the two and very much plans on next fighting for the title.

“Yes, we are planning that Zaur will fight Campbell,” German Titov, Abdullaev’s promoter confirmed with BoxingScene.com. “We hope that the fight will be for the title.”

The WBC has yet to publicly order a vacant title fight, only recently confirming that Garcia (39-1, 30KOs) has agreed to relinquish the crown in exchange for “Champion Emeritus” status. The distinction gives him the right to directly challenge for the title whenever he chooses that such a fight is in his best interest.

The now former four-division titlist gave up the belt in lieu of fulfilling an overdue mandatory title defense obligation. Campbell (20-2, 16KO) advanced to the mandatory challenger slot following his 12-round win over Yvan Mendy in their title eliminator last September, avenging his first career defeat in the process.

Biding his time while Garcia pursued an ultimately unsuccessful bid of Errol Spence’s welterweight title, Hearn wisely slotted Campbell in a stay-busy fight this past March. A 5th round stoppage of Adrian Yung gave the 2012 Olympic Gold medalist his 3rd straight win following a split decision loss to then-titlist Jorge Linares in Sept. ’17, with the latest victory coming on the eve of Garcia’s aforementioned loss to Spence.

It also came three weeks after the last ring appearance for Abdullaev (11-0, 7KOs), who scored a 10th round stoppage of Humberto Martinez this past February in his hometown of Ekaterinburg, Russia. Ten months prior, the 25-year old Abdullaev established his place in line with a 12-round win over Denier Berrio for the WBC “Silver” lightweight title.

Wedged in between is the most notable win among his still-young two-year career thus far, outpointing veteran contender Hank Lundy over 12 rounds last September.

Somewhere along the way surfaced the belief that Abdullaev—a practicing Muslim—would not be available to fight Campbell due to the upcoming holy Ramadan season. Hearn recently suggested in an interview with videographer Rahim Davies that the unbeaten Russian couldn’t fight until at least September as a result.

Not only does the suggestion jump the gun on Abduallev’s own availability, but also doesn’t explain how a Campbell-Haney fight could take place anytime before then. Haney is currently signed to fight on May 25 versus Moran, whose handlers have confirmed a signed contract in place and—to date—no indication of the fight being canceled.

Of course, anything can happen in boxing. What’s not going to happen next, however, is Abdullaev’s team looking into any other option beyond a shot at the WBC lightweight title for his next ring adventure.

“He is ready for the big fights; there is no need for an (interim) bout,” Titov insists. “We (plan) for his next fight to be for the WBC belt. We do not keep in mind any other plans.”