It was claimed that Joshua wanted to pull out after having a panic attack moments before his ring-walk and some have used it as explanation for his delayed entrance and his father’s furious reaction to the end of the fight.

Joshua, who had been badly disorientated and knocked down four times during his brutal defeat at the hands of Ruiz Jnr, had to restrain his ‘upset’ father Robert as he tried to confront Hearn in the ring afterwards.

TV were also not permitted access to Joshua’s dressing room as normal after the fight.

The former unified world champion appeared worryingly confused during the fight after taking several heavy blows from Ruiz and was heard asking his trainer Rob McCracken: ‘What round is it? Why am I feeling like this?’

Hearn addressed the rumours this week, writing on Twitter: ‘Panic attack? I’ve heard all sorts of things – there was no issue at all going into the fight.’

Joshua, who is understood to be house bound by the doctor’s orders until Wednesday following his seventh-round stoppage against Ruiz, is set to cancel a planned 10-day break in America to fly back to London. He is due home on June 10 but is expected to return earlier.

Matchroom boss Hearn has also moved to dispel other rumours circulating, including that Joshua was knocked out in sparring just weeks before the fight.

It has been claimed that he was dropped by Agit Kabayel, the European champion, which has also been held up as a reason why Joshua had marks on his face ahead of his knockout defeat by Ruiz.

But Hearn told Sportsmail on Monday night that Joshua was not decked by any of his partners and that Kabayel was never involved in sparring.

Joshua has also refused to make any excuses for his first defeat in the professional ranks, saying after the fight: ‘I don’t underestimate anyone.

‘He’s a decent puncher, decent fighter. It’s his chance, isn’t it? I always say that anyone who comes to box me boxes 15, 20 per cent better than what we’ve seen. 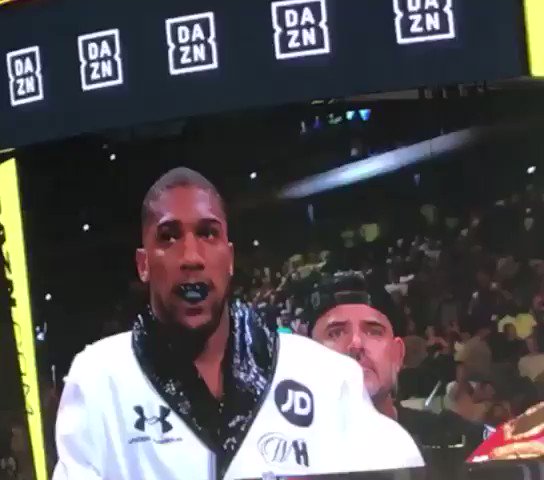 Joshua’s eyes all over the show in the intro. Visibly something clearly not right with him..

‘It’s funny because it’s easy to overlook someone because of their shape or their record or whatnot, but these guys are coming to win. He’s the better man tonight.’

Joshua’s team confirmed their intent to enforce an immediate rematch set for either November or December, to possibly take place in the UK following his damaging defeat at Madison Square Garden.

Hearn added: ‘He’s not the kind of guy to cry and sulk. He’s going to go away, evaluate his performance and improve.

‘He knows he should be beating Andy Ruiz. He wants the rematch but it’s a must-win now, it’s all or nothing.

‘Last night I saw a guy I knew wanted the belts back. This morning I saw a guy where that was the only thing on his mind, to become heavyweight champion of the world again.’