Alexis Sanchez: from Arsenal to Chelsea?

The Italian manager is in talks with Chelsea over a new contract and, as part of that, summer transfers have been discussed. Conte has submitted to the club’s recruitment team, effectively headed by the director Marina Granovskaia and technical director Michael Emenalo, a list of players he would like to sign, with Sánchez and a left-sided defender among the priorities. 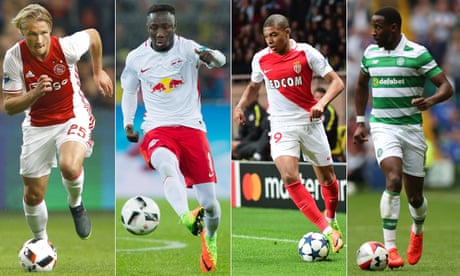 From Kasper Dolberg to Naby Keïta – who are the most in-demand players for the summer?

Sánchez looks set to leave Arsenal after three years at the club. The 28-year-old has become increasingly frustrated with the lack of progress at the Emirates over the past two seasons and would welcome a new challenge.

His contract has 15 months to run and Chelsea are aware that a transfer will be difficult to conclude because Arsenal would prefer not to sell to a domestic rival if they cannot persuade the Chilean to stay.

Paris Saint-Germain, one of Europe’s richest clubs, are also keen to sign him, as are Juventus and Internazionale.

Inter have Chinese owners, Suning, who are expected to spend heavily in the summer to shake up Stefano Pioli’s squad in an attempt to challenge Juve at the top of Serie A.

Juventus are the only other club in Italy who could afford the Chilean’s wages. Real Madrid and Barcelona, Sánchez’s former club, are not interested in the player.

Sánchez’s agent, Fernando Felicevich, is understood to be aware of Chelsea’s interest but there has not yet been a bid from the Premier League leaders.

Arsenal are unlikely to make a decision on Sánchez’s future until after the season, when they will know whether they are playing in the Champions League in 2017-18 (or at least if they have qualified for the play-offs).

Arsène Wenger said recently that contract talks with Sánchez were on hold until the end of the season. The player, though, seems determined to leave.

The incident at the start of this month when he stormed out of an Arsenal training session and was involved in a dressing-room slanging match with some of his team-mates was an indication of his frustration.

If Chelsea secure Sánchez he would be the first player to join them from Arsenal since Ashley Cole in 2006.

In terms of a left-sided defender, Conte has set his sights high and has told Abramovich he is keen to sign David Alaba of Bayern Munich or Juventus’s Alex Sandro.

The Southampton central defender Virgil van Dijk is also a target, as is the Monaco midfielder Tiemoué Bakayoko, though Chelsea face competition from Manchester United, Manchester City and PSG for the France international.

Diego Costa is expected to leave in the summer and if the Brazil-born forward departs Chelsea would look to sign Everton’s Romelu Lukaku and/or Real Madrid’s Álvaro Morata as a replacement.

Madrid have made Eden Hazard one of their principal targets but Chelsea will resist any offers for the Belgian, who is understood to be settled in London and far from agitating for a move.

Conte is close to signing a new contract but wants assurances that Chelsea are willing to spend big in the coming transfer windows to have a squad capable of challenging in the Champions League.

The Italian joined last summer on a deal until 2019 worth around £6.5m a year and, although Chelsea are keen to extend that and will increase his salary, any agreement reached may be confirmed only after the title has been won.

Inter would like to lure Conte back to Italy but the 47-year-old has said that his wife, Elisabetta, and young daughter, Vittoria, will finally move to London in the summer.

John Terry looks certain to leave in the summer and Chelsea’s anticipated revamping of their forward ranks could have implications for Michy Batshuayi, who has been a bit-part player this season and could be made available for a season’s loan. The same applies to the centre-half Kurt Zouma.