All Thai football players, coach, to be rescued, today 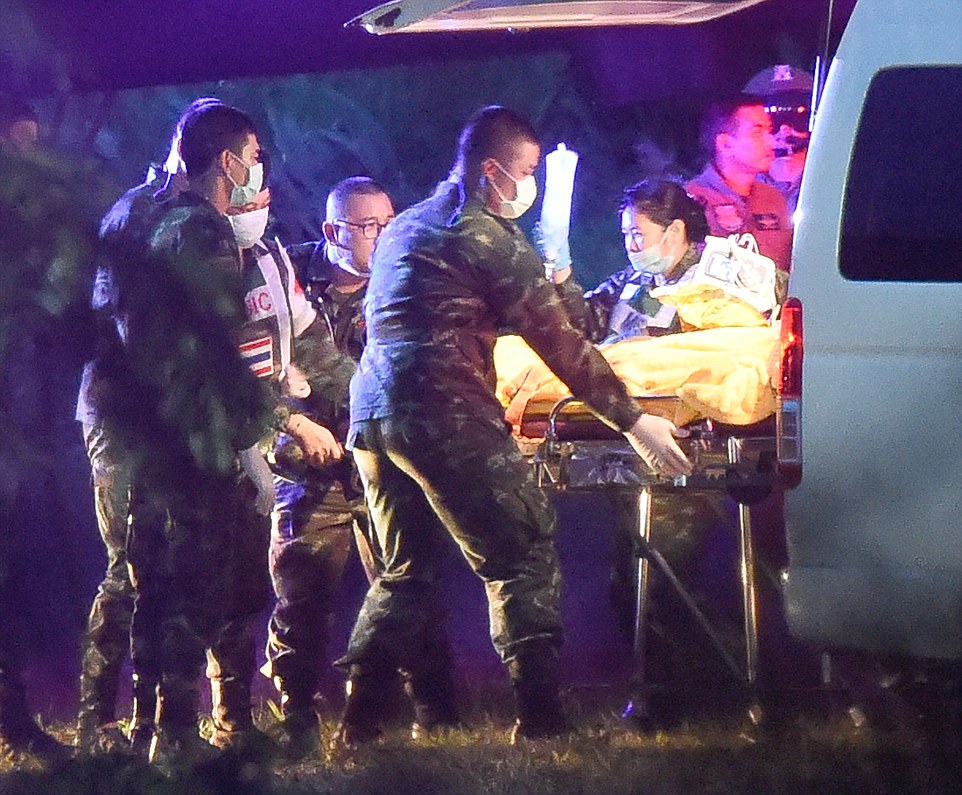 On Monday the British-led rescue mission resumed with four more boys from the Wild Boars football team extracted to safety through miles of claustrophobic underground tunnels Pictured: One of the boys is taken away on a stretcher 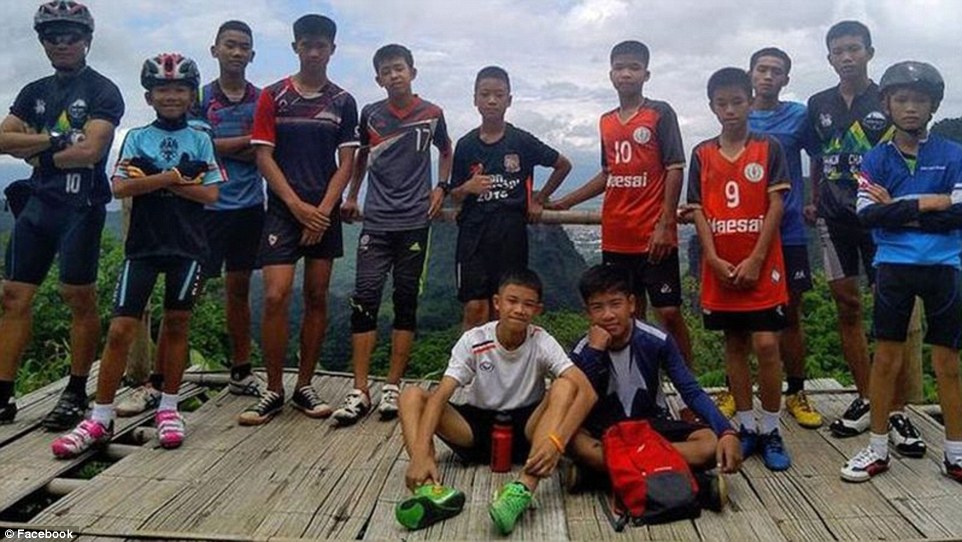 Among the final batch to be rescued is 11-year-old Chanin Wiboonrungruang (second left), whose nickname is Titan

The mission to rescue the final four school boys and their football coach trapped in a flooded cave in Thailand has begun on Tuesday morning.

The governor leading the rescue mission at the Tham Luang Cave in Chiang Rai, northern Thailand, said this morning that they expected that ‘everybody will be out today.’

The rescuers are determined to get the remaining boys out of the cave before the monsoon rains make an evacuation impossible.

‘The water level is almost at the same level as for the first two days so we decided to carry out the operation for the last batch,’ Governor Narongsak Osottanakorn said.

‘If nothing goes wrong the remaining boys, the doctor [a Thai Navy Seal medic] and the three [Thai] Navy Seals who have staying with the boys since the beginning of the mission will come out this evening.’

He added that the operation will be more difficult than the previous days due to the increased number of people to be evacuated. 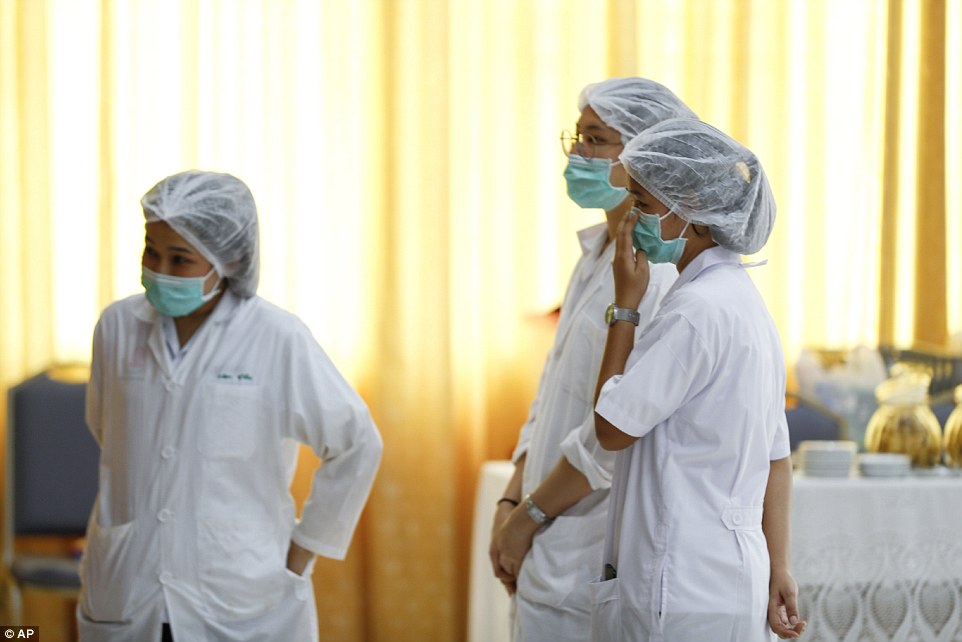 Hospital workers watch a press conference at their hospital where rescued boys are tended to, in Chiang Rai province, northern Thailand 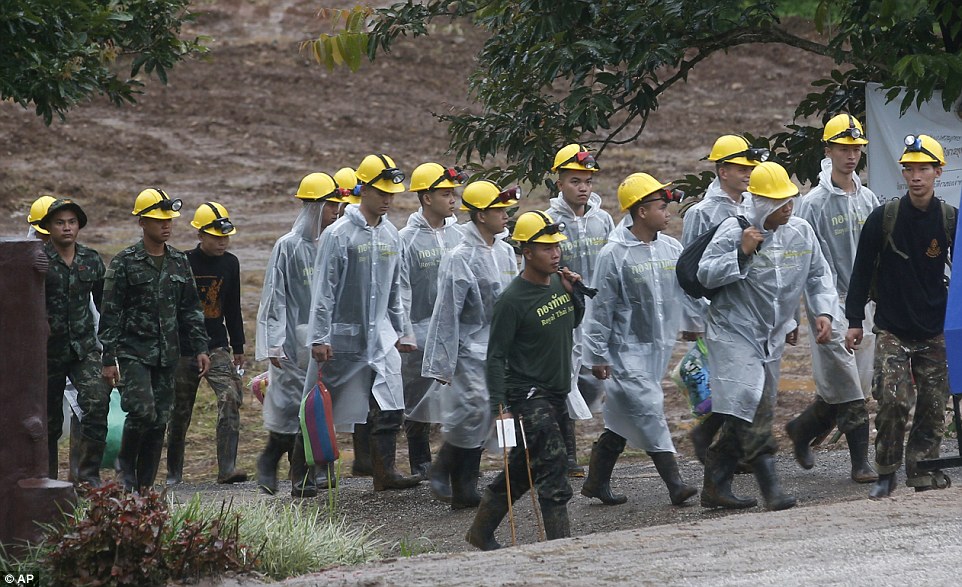 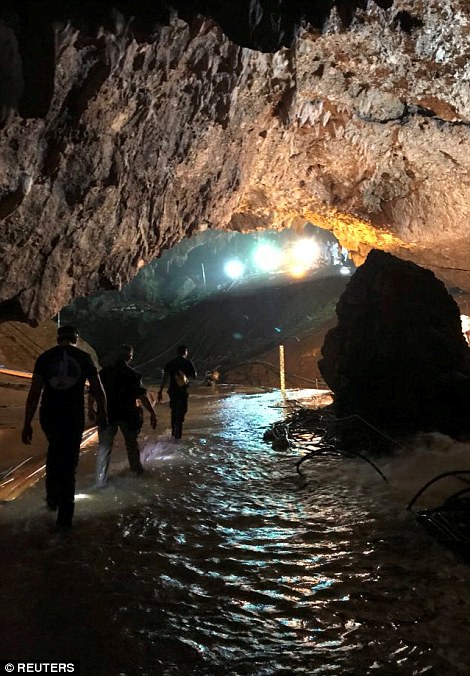 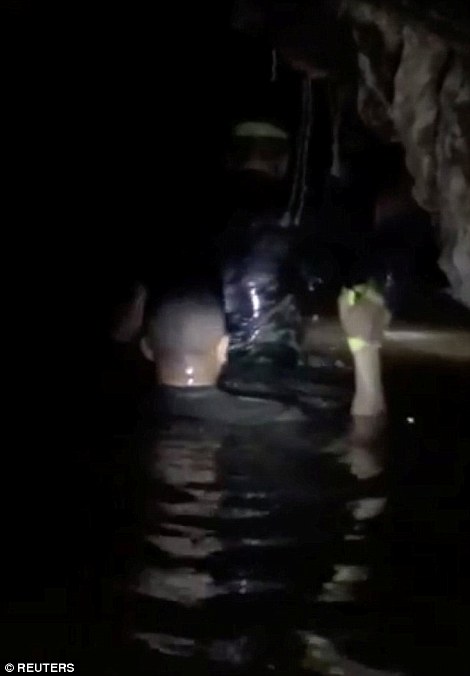 The mission to rescue the final four boys and their football coach trapped in a flooded cave in Thailand has begun. Right: Rescuers wade in the flooded Tham Luang cave 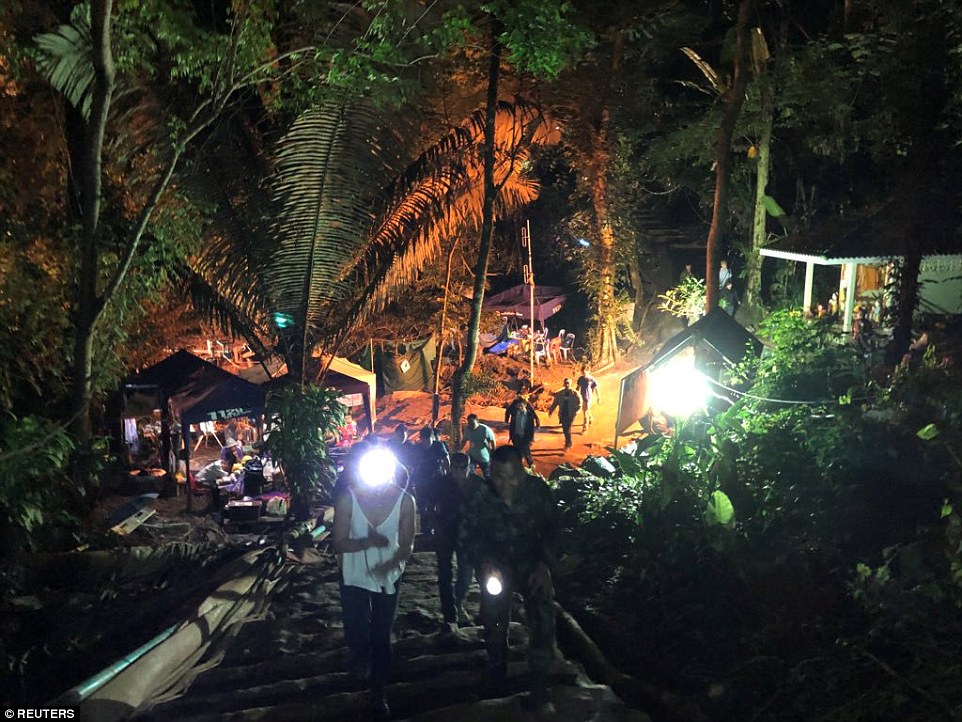 Rescue personnel walk at the site of the Tham Luang cave complex during a mission to rescue the remaining members of a soccer team trapped in a flooded cave in Chiang Rai, Thailand

Two of the eight boys rescued so far are being treated for lung disease and the other six have hypothermia, a Thai doctor revealed.

The rescued boys are said to be in good spirits and feasting on bread with chocolate spread.

Their relieved parents were forced to wear surgical robes and masks and were not allowed to hug their sons to prevent infection when visiting them in hospital last night.

The operation to rescue the remaining four boys and their coach began around 10am local time (4am UK time) on Tuesday.

Officials last night suggested coach Ekaphol Chantawong, 25, could face a night underground alone because the divers’ system of extracting four boys at a time was working well – but rescuers said all those remaining will be brought out today. 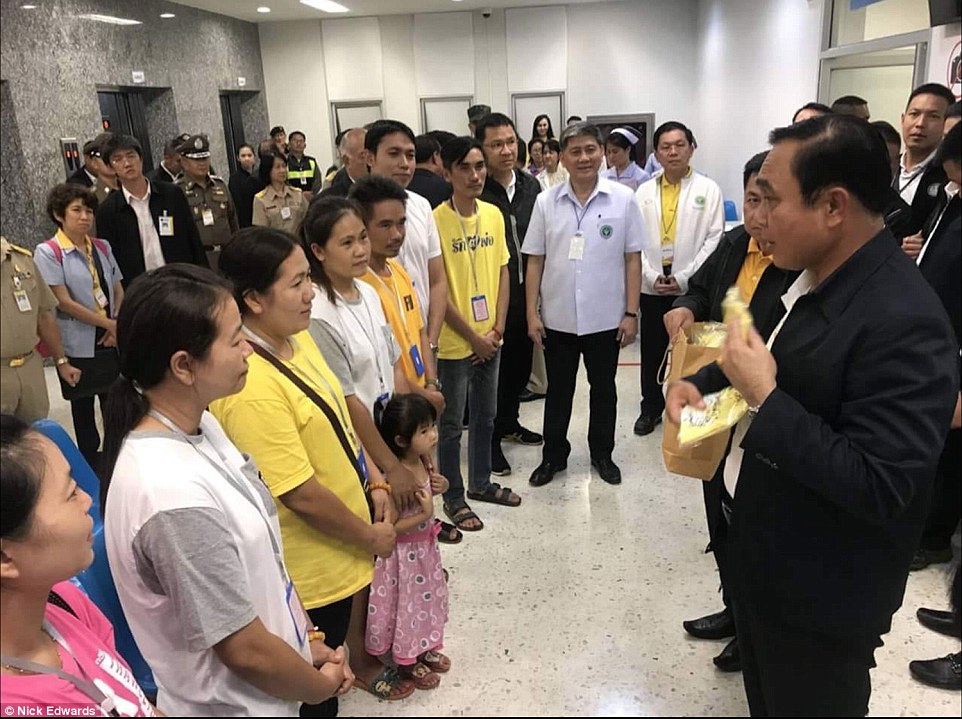 Pictures of General Prayut’s visit to the rescue site and the hospital were released by the Thai government last night. Pictured: He speaks to families of the trapped boys 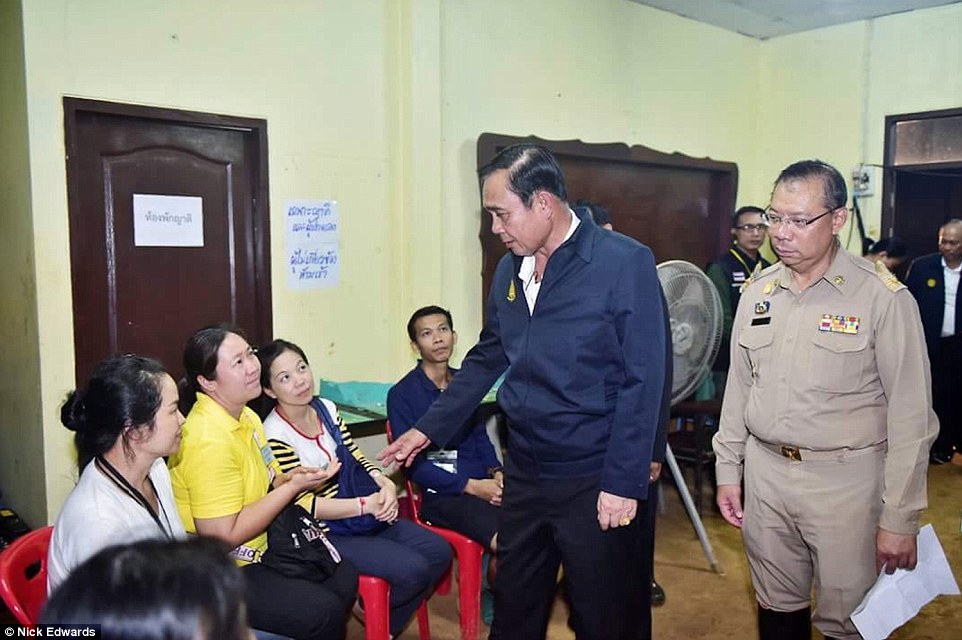 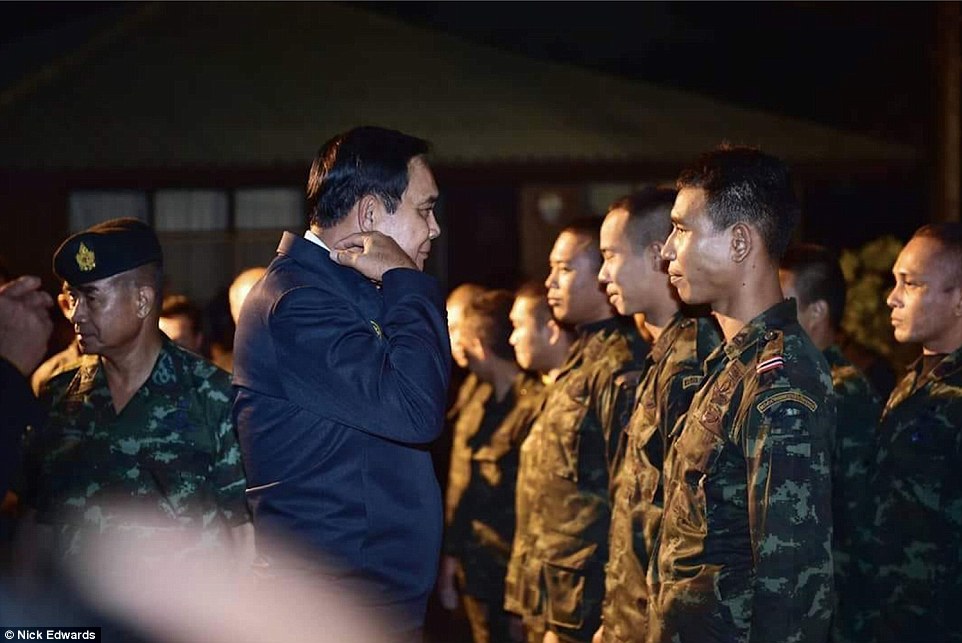 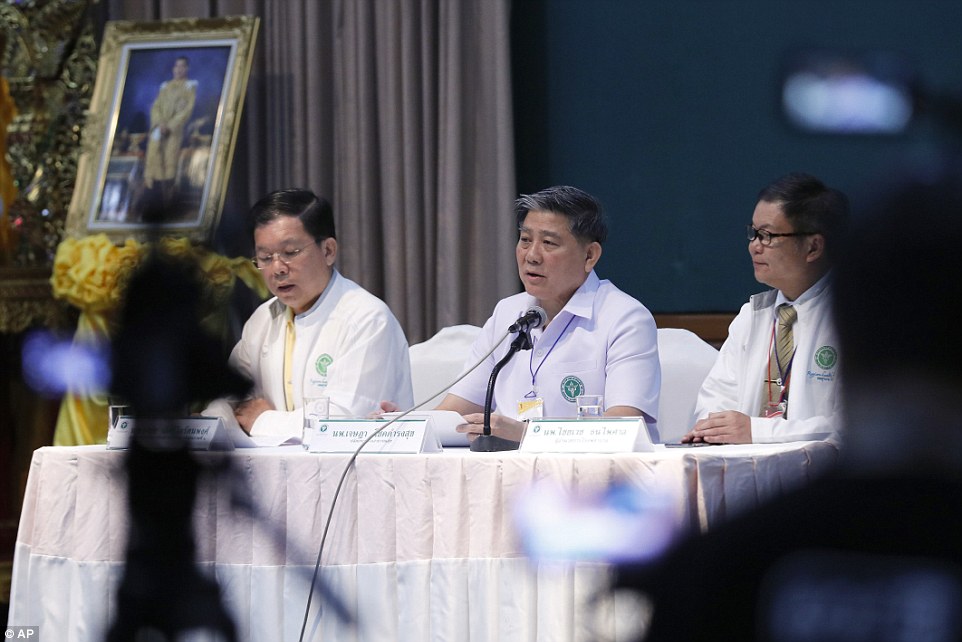 The first eight to be evacuated have all been given inoculations against rabies and tetanus and are all being treated with antibiotics amid fears they were bitten by disease-carrying bats inside the huge underground network.

The boys are weak and ravenously hungry, Thailand’s public health chief revealed, but have been laughing and joking with staff and officials.

They are unlikely to be well enough to take up FIFA’s invitation to watch the World Cup final in Moscow, Public Health Permanent Secretary Doctor Jedsada Chokdamrongsuk said today.

Two of the boys have pneumonia, a lung infection which can be exacerbated by spending extended time in a cold and damp environment.

‘These boys are being treated with antibiotics. All of the boys were suffering from hypothermia when they arrived at the hospital,’ he said.

‘But they have all now reached normal body temperature. The hypothermia could have been a result of diving for several hours.

‘All of the boys have been given inoculations and rabies inoculations because of the concern that they may have been bitten by bats which live in the cave. 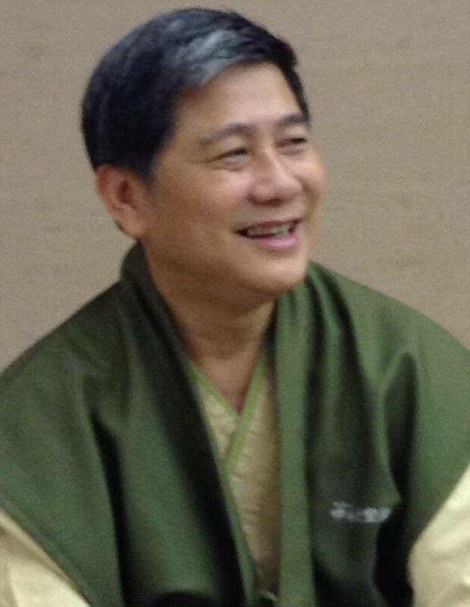 ‘One of the boys has a slow heartbeat but overall they [the eight evacuated so far] are in a safe condition and their lives are not in danger.’

The doctor said blood samples taken from the boys will be sent to a specialist lab in Bangkok to test for ’emerging diseases’.

Their relieved parents will only be allowed to go to their bedsides once they have been given the all-clear.

‘But parents and other families members must remain two metres from the boys and must wear surgical masks and robes when they visit them,’ Dr Jedsada said.

Dr Jedsada said in general the boys are in good spirits.

‘They are very talkative. They were laughing and joking with the prime minister [General Prayut Chan-o-Cha] when he visited them last night.

‘They say they are happy to be out of the cave and want to go home.’

But he said the boys would remain in hospital for at least a week and were unlikely to be well enough to travel to Russia for the World Cup final.

Last week, the 12 Wild Boar FC players and their coach were invited by FIFA to watch the World Cup final in Moscow on July 15.

‘The boys are unlikely to be well enough to go to watch the World Cup final in Moscow but they can watch it live on the TV for sure.’

Yesterday, the British-led rescue mission resumed with four more boys from the Wild Boars extracted to safety through miles of claustrophobic underground tunnels.

Incredibly, they could not even swim before their ordeal, and were pulled along through the tunnel with the help of expert divers, including some from Britain.

Now just four of the youngsters and their coach remain in the hellish Tham Luang cave, in northern Thailand. The 13 were trapped during a visit on June 23 when monsoon floods blocked the cave exit and forced them back three miles into the mountain – where they have stayed on a ledge starving in the darkness. 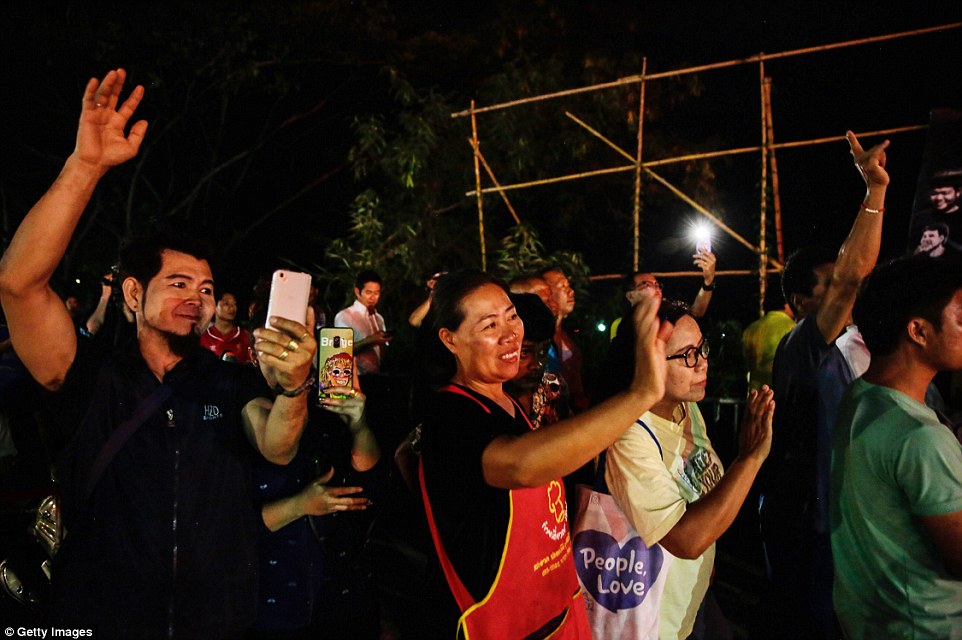 Good news: Onlookers watch and cheer as ambulances transport some of the rescued schoolboys from a helipad to the to the Chiang Rai Pranukroh Hospital in Chiang Rai, having been airlifted from the caves 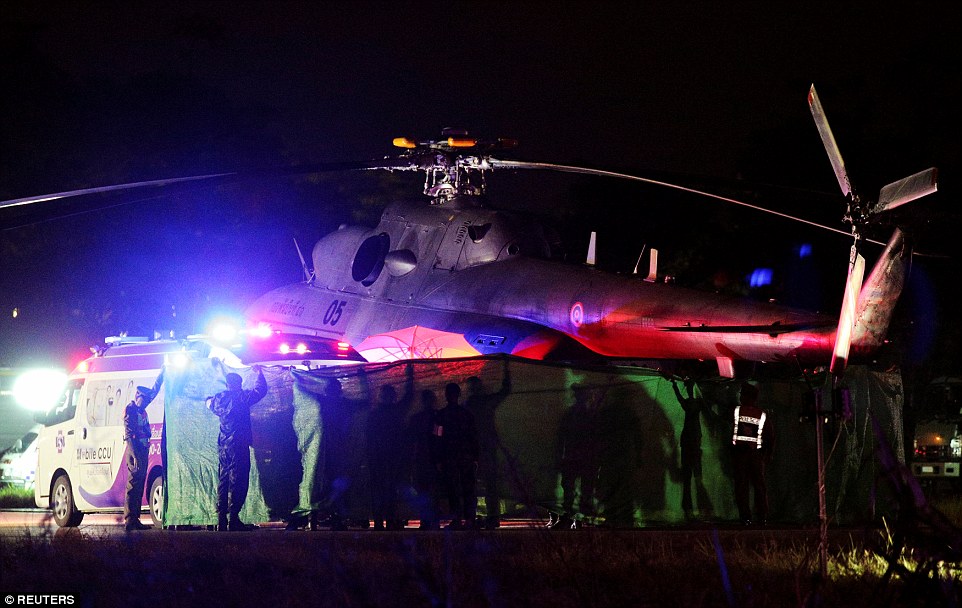 Mission: As Monday’s part of the rescue mission came to a close, one of the boys is seen being moved from a military helicopter to an ambulance taking them to hospital

Last night, emerging from the cave complex, some of the boys were carried to a fleet of helicopters amid frenzied cheering from onlookers.

In one dramatic scene at 6.30pm, an army medic hoisted a drip while another held a monitor as a team of soldiers carried a boy on a stretcher. The youngster was wrapped in a silver space blanket to preserve what little body heat he had left. The medical team were all wearing masks to protect against infection.

That boy and at least one other had to be airlifted to Chiang Rai Prachanukroh Hospital, where the first four children from Sunday’s rescue mission are recovering.

From their dedicated ward, the boys have demanded meals of pad krapow – a Thai comfort dish made from spicy pork, basil leaves and rice. On doctor’s orders they are getting no more than baby food, Mr Osottanakorn revealed.

‘The four children from today are in good health,’ he said. ‘Doctors have told us we must be careful about the food that is given to them because they are fragile after starving for many days. They can take normal food like diluted porridge.’ 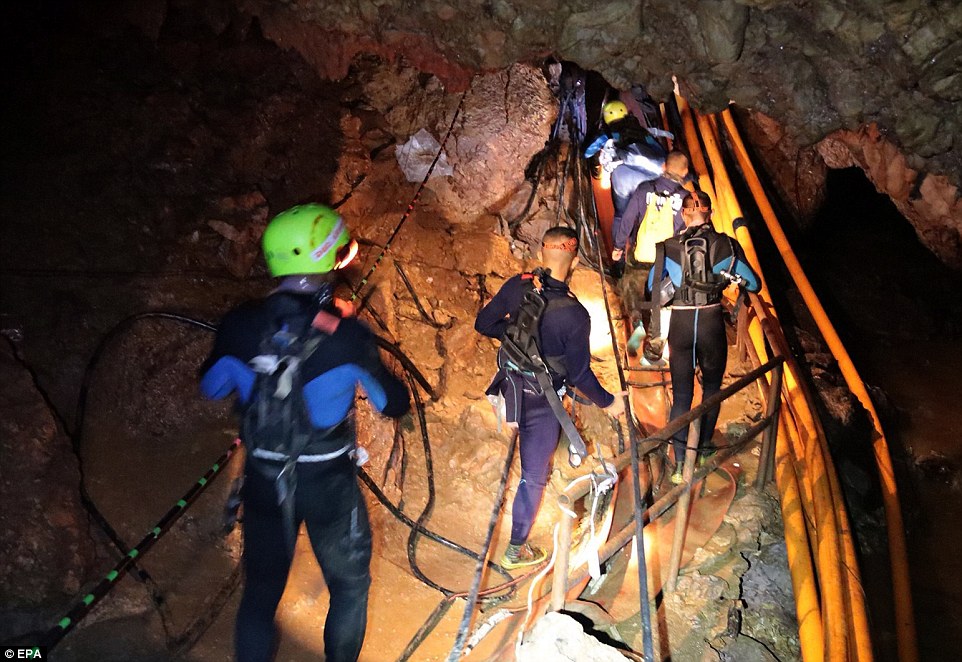 The relieved parents of the rescued Thai school-boys beamed with delight after visiting their beloved sons at hospital last night.

The mothers and fathers could hardly contain their joy at the successful reunion with their children at the Chiang Rai Pranukroh Hospital – despite not being allowed to kiss or hug them.

The parents were given a message of support by Thai Prime Minister General Prayut Chan-o-Cha, who visited the Tham Luang cave rescue site yesterday.

They followed the PM from the jungle site to the hospital in the provincial capital Chiang Rai where they were able to see their boys.

However, the anxious wait for the rescue of the remaining four boys still stranded inside the flooded cave continues.

These parents stayed at the cave entrance last night – while the others visited their boys.

The relieved parents – and at least one little sister – can be seen smiling and clearly relieved as the talk to General Prayut. 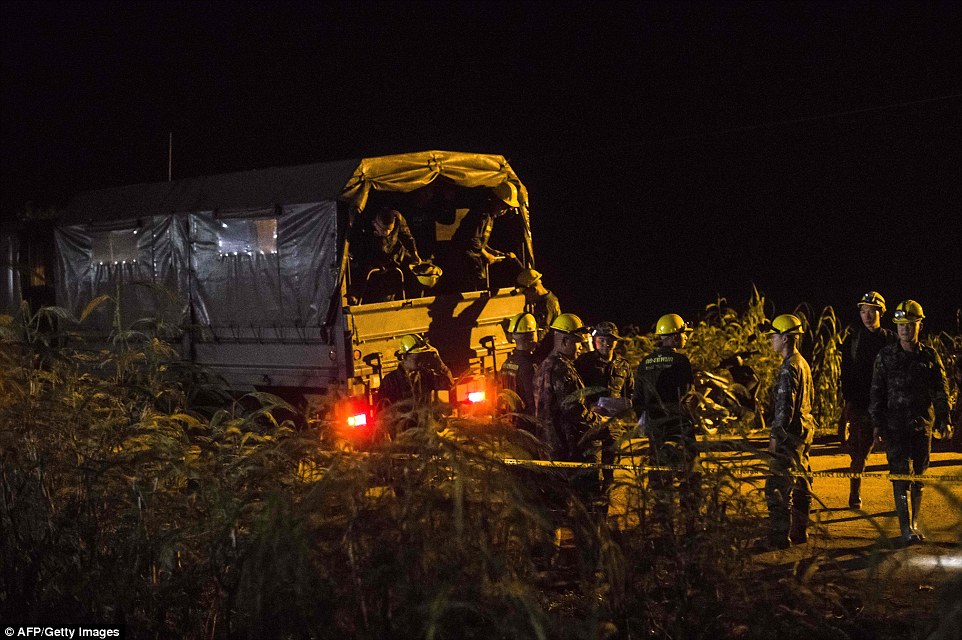 Not over yet: Thai soldiers arrive on military truck at the Tham Luang cave area as the operations continue for those still trapped inside the cave in Khun Nam Nang Non Forest Park in the Mae Sai district of Chiang Rai province

Earlier the prime minister visited the rescue operation centre in front of the cave entrance and met Thai military officers, cave diving specialists – including the British pot-holers – and the all the rescue workers.

Pictures of General Prayut’s visit to the rescue site and the hospital were released by the Thai government last night.

The meetings with the parents in the jungle and later at the hospital took place after the eighth boy was evacuated from the flooded cave.

Yesterday afternoon, public health inspector Dr Thongchai Lertwilairattanapong said the parents of the latest foursome would be allowed to see their children in the evening but added: ‘Visitors will only be allowed to meet and talk to the patients but no hugging or touching – and they need to leave a one to two-metre distance.’

The boys are being monitored for breathing difficulties, hypothermia and an airborne lung infection known as ‘cave disease’ caused by bat and bird droppings which can be fatal if untreated. 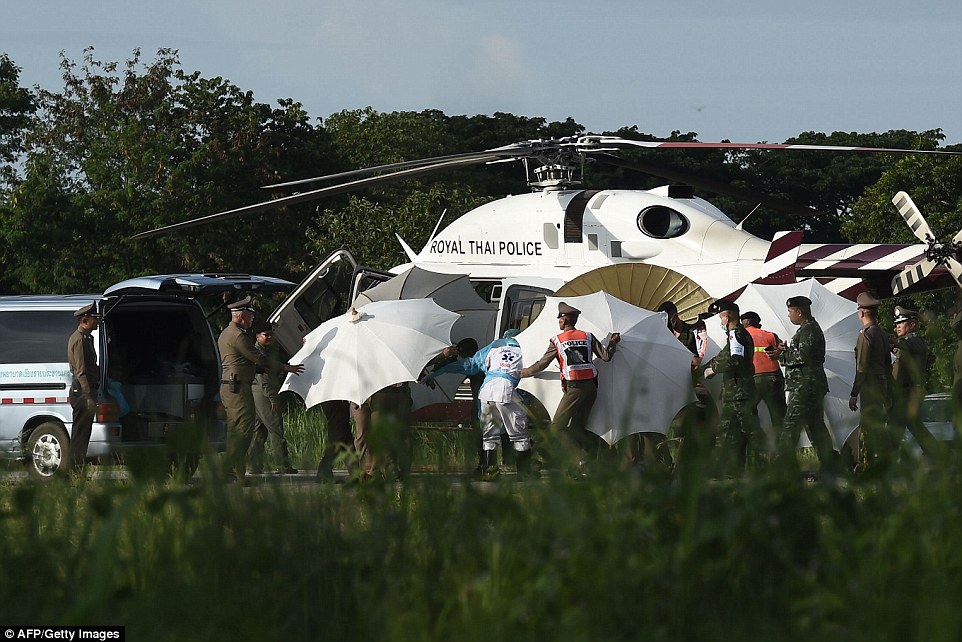 The Thai authorities have refused to name any of the rescued boys until all of them are out (pictured: umbrellas are used to shield the identities of boys airlifted to hospital)

While the names and pictures of the first four boys have been broadcast all over the world, Thai authorities have refused to officially name any of the rescued until all of them are out.

Scores of other volunteer cave divers from around the world helped by delivering air refill tanks and tightening the guide rope along the route, which includes ten ‘choke points’ where the mud-clogged tunnel is terrifyingly narrow.

Friends of the British experts claimed they ‘never panic’ under water and would be keeping reassuring eye contact with the children. Wearing full-face masks, the boys either swam or were pulled along. Yesterday’s nine-hour mission – starting at 11am – was two hours shorter than Sunday’s.

A source who saw two of the four boys walk out of the cave yesterday said they looked ‘tired but healthy’, adding: ‘Imagine marathon runners. It’s like when they reach the finish line exhausted.’

Last night the Thai prime minister flew to the cave to thank the rescue squad, and said the ordeal should serve as a wake-up call to all children to avoid it happening again.