The Queen Mother Champion Chase here on Wednesday was a race that had been 12 months in the making, and while the long-awaited meeting between Altior and Douvan was a storyline only until the fourth-last fence, the final scene was the one that most of the record second-day crowd had come to see. Altior remains unbeaten over fences – and for once, he was forced to do it the hard way.

Three of Altior’s rivals appeared to be travelling better than the even‑money favourite on the run down the hill towards the home turn, seconds after Douvan had powered into the lead, only to suffer a fall four out. Min, the second-favourite, was cruising on ground he relishes, while Nico de Boinville was niggling at Altior and, for a moment, apparently getting little response from his mount.

But Altior was fighting the tacky ground as much as he was his rivals, and when they straightened for home his class kicked in. It needed only a few strides to dismiss Politologue and God’s Own from the reckoning, before Min and Altior jumped the last upsides each other.

The favourite was away from it swiftly, and so fast up the hill that he was seven lengths in front of Min at the line.

“I was in serious trouble the whole way round,” De Boinville said. “He was hating the ground. This ground would be the worst he has ever had, it is so dead and tacky. They kicked on and I had to sit in behind and wait, and he is some horse to get me out of trouble. His jumping kept him in the race. I knew that he had those gears at the end of the race, he’s a freak.”

Altior is only the fifth horse to win three different races at successive Cheltenham Festivals, having beaten Min into second place in the Supreme Novice Hurdle in 2016 before landing the Arkle Trophy 12 months ago. He is also the rider’s second winner of the Champion Chase, following his victory on the brilliant Sprinter Sacre in 2016.

“He and Sprinter Sacre are very different horses,” De Boinville said. “Sprinter always did the best of his work between three out and two out, whereas Altior does it at the end, so you can afford to hold on a bit longer with him.

“But I just love the way he goes straight to the line there. It’s quite hard to peg them back in ground like this, but with his turn of foot he’s done it like a hot knife through butter.” 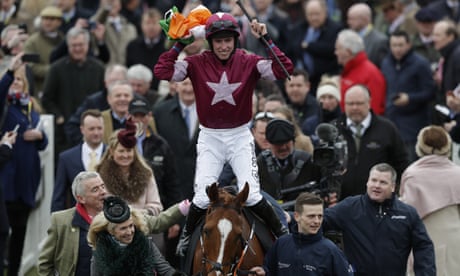 Cheltenham Festival: Samcro aiming for bigger prizes after living up to hype

Altior was found to be lame at the stable of Nicky Henderson, his trainer, just two days before the race, the latest hiccup in a season that has also included an operation to correct a wind problem a few weeks before Christmas.

“If we had been beaten I wouldn’t have used a sore foot as an excuse,” Henderson said. “It’s been a tough season and he’s been missing out on races, but he’s so good. He’s just got gears, and Nico was great because they were going a good gallop and he kept calm.”

Nicky Henderson, who also took the Champion Hurdle on Tuesday when Buveur D’Air rallied to win in similar style to his stable companion, is now on the brink of an unprecedented treble in the meeting’s three biggest races as Might Bite, the King George winner, is the probable favourite for Friday’s Gold Cup.

“It’s funny how champions come around in the same breath,” Henderson said, “but I feel they help each other. If you have good horses, they make good horses.

“It’s strange that Altior has come around so soon after Sprinter Sacre [who won the Champion Chase in 2013 and 2016]. This horse is very, very good and I always said he had very big shoes to fill, but each time he wins he gets closer to doing that.

“We will never forget Sprinter, who tugged at heartstrings in a way this horse might never do, but if he wins [the Champion Chase] again he might. Sprinter was such a show-off and a swank, and he won this race by a distance, although I’m not sure he beat horses as good as the runners today.”

Douvan was uninjured in his fall, and Willie Mullins was pleased with his performance to the point at which he fell.

“I thought he had done enough to show that he was back to himself,” Mullins said. “He was absolutely cantering, jumping great and I then he over-jumped and just caught the top of it. I thought it was a huge positive from my point of view.”