Álvarez v Golovkin – finally the fight we all want to see 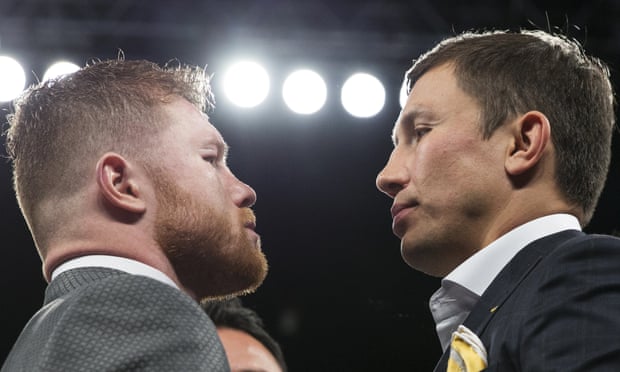 Finally boxing has the fight the industry badly needed and the fans have loudly craved for the past couple of years: Saúl “Canelo” Álvarez against Gennady “GGG” Golovkin on 16 September, probably in Las Vegas, with other bidders surely lurking.

No sooner had Álvarez completed a dominant, untroubled points win over the disappointing Julio César Chávez Jr in Las Vegas on Saturday night than Golovkin, the unbeaten holder of all the relevant world middleweight belts, emerged from the crowd to confirm the news of the showdown. Álvarez said in the ring, “Yes sir, it’s done” – they have yet to agree on a venue, money-split and weight but at least they have committed to a date.

Golovkin said: “I feel very excited. I think in September it will be a big Mexican-style [fight], a big drama show. We’re ready.”

Although Álvarez has spent much of his career at 11st he looks immensely comfortable at middle and regularly is huge on fight night, sometimes 20lb or more above the weigh-in limit, whatever the division. Golovkin, a seasoned middle, might insist the Mexican get closer to his own natural weight.

All these are details that will not concern millions of boxing fans. They just want to see the fight. Only pig-headed perversity can prevent the fight now …although the business has never been short of that commodity.

Saturday’s fight was made at a curiously specific catchweight of 164.5lb, about 10 pounds heavier than when Álvarez stopped Amir Khan and Liam Smith last year, although, like then, he will have entered the ring considerably bigger than that. Chávez, who already had height, reach and size on his side, had trained down to 164lb diligently, from all appearances, but lacked fire.

Michael Buffer announced it merely as “12 rounds of boxing in the super-middleweight division”. There was no sanctioned title but a bigger prize: who was the better or best Mexican?

Chávez, burdened as he is blessed as the son of a legend, tried his best but could not cash in on his size and reach advantage and, when they got properly down to it, Álvarez, a pre-fight 4-1 on favourite in Vegas, bossed him for a deserved shut-out. There were no knockdowns nor were there any moments of high drama.

In some ways it was a very un-Mexican fight and perhaps a disappointment to the Latino community – especially the young women in the crowd whose teenage squeals anticipated blood and thunder that never materialised. The excellent Barry Jones on BoxNation gave Chávez the ninth but that was charitable. Richie Woodhall thought it “a very disappointing display from Chávez”.

Álvarez, boxing conservatively but with purpose, did all he needed to do. On the few occasions when Chávez went on the front foot – in the seventh as the contest was steadily ebbing away from him – Álvarez made him pay the price with a brutal response.

All three judges gave it to Álvarez 120-108. Even those guys get it right sometimes. In the ring afterwards Chávez looked happy to have taken part and leave with $3m. Álvarez, who received $2m more than that, smiled contentedly and now looks forward to far greater riches. “I wanted to give Mexico a great fight,” Álvarez said, “but he wouldn’t throw punches.”

Certainly Álvarez beat Chávez more convincingly than Golovkin defeated Daniel Jacobs in New York in March, although it will take a brave bookmaker to separate them in September. If I had to make an early call, it looks as if Álvarez is getting the 35-year-old Kazakh at just the right time. Canelo fell short against Floyd Mayweather – a different sort of genius – in 2013 when he was not quite ready.

But he is ready now.

The gap in class around that weight was evident on the undercard. David Lemieux, a serious threat in the division before Golovkin dismantled him in eight rounds in 2015, has rebuilt his reputation with a few decent wins since, but the Canadian banger laboured for 10 rounds before heavily outpointing Marcos Reyes, a resilient tradesman who took Chávez to 10 losing rounds four fights previously.

The Britons Billy Joe Saunders, if fit, and Chris Eubank Jr, and the Irishman Andy Lee, are worthy contenders in this step-down company and might get their chance over the next year or so, to then push on for a shot at either of Álvarez or Golovkin, or both.

However, Saunders, back in the gym alongside Tyson Fury, missed the boat when talk of a recent Golovkin fight collapsed. Lee, who lost to Saunders nearly 18 months ago, returned with an eight-round workout against KeAndre Leatherwood in New York in March and might squeeze in ahead of him through his US connections.

Eubank? Since he lost to Saunders in November 2014 he has wandered round the boxing jungle like a lost soul. After beating Gary O’Sullivan a year later he had a Golovkin challenge nailed on but swerved it. He might be the worst-managed prospect in boxing. It is not an era in which to be complacent.