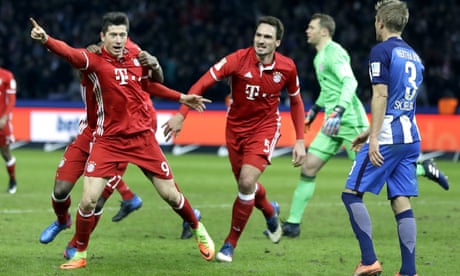 The German broadcaster ARD reported the 57-year-old coach raised his middle finger to home fans, with the Italian claiming he had been spat on during Saturday’s Bundesliga match, in which Bayern scored a stoppage-time equaliser through Robert Lewandowski.

When asked about the incident, Ancelotti told ARD Sportschau: “Yes, I made the gesture because I was spat on.”

ARD report that the German Football Association (DFB) will contact the former Chelsea, Paris St-Germain and Real Madrid manager for his views on the matter.

Lewandowski’s goal six minutes into added time at the end of the game cancelled out Vedad Ibisevic’s first-half opener for Hertha and enabled Bayern to take an eight-point overnight lead at the top of the Bundesliga, but RB Leipzig reduced that to five with a 2-1 win at Borussia Mönchengladbach on Sunday.