Gareth Bale will earn £150m over the next six years in salaries and bonuses after signing a contract extension with Real Madrid until 2022 that will make him the best-paid player in the world.

The European champions confirmed on Sunday the 27-year-old has committed his future to the club he joined in September 2013 for a then world-record transfer fee of £85m.

“Real Madrid and Gareth Bale have agreed to the extension of the player’s contract, which ties him to the club until June 30, 2022,” read a club statement. 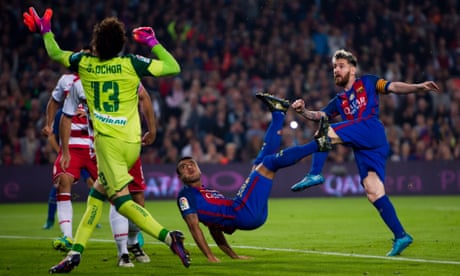 Negotiations over an extension have been continuing for several months between Real and Bale’s representative, Jonathan Barnett, with an agreement reached a few weeks ago.

It is understood the contract is worth more than £600,000 a week before tax with the buyout clause set at €1bn (£900m). It is believed to be one of the biggest in the history of the sport.

That is the equivalent to around £350,000 a week after tax, more than the estimated £288,000 Real pay Cristiano Ronaldo. Negotiations over a new deal for the Portuguese have not yet been finalised.

The contract ends any lingering doubt that Bale would remain in Spain despite speculation he could return to the Premier League. He has scored 50 goals in 90 league appearances and helped Real lift five trophies during his three years at the club, including winning the Champions League in 2014 and 2016.

Bale joins Luka Modric, Toni Kroos and Lucas Vázquez in committing his future in recent weeks. His previous deal – signed in 2013 – was to run until 2019.

Real have been looking to tie down their leading players as they also fight a Fifa transfer ban for breaching rules governing the transfer and registration of players aged under 18.

The club, along with city rivals Atlético, are banned from registering players in the next two transfer windows – until January 2018 – but have appealed against the ruling to the court of arbitration for sport.