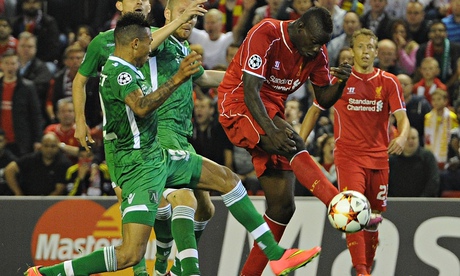 Returning to the Champions League is not simply about finance and frenzied Anfield nights for Liverpool but the development of a young team and a 41-year-old manager making his competitive debut among the European elite. Ludogorets Razgrad, for all the palpitations they caused and questions they raised, provided an ideal accelerant for Brendan Rodgers in that regard.

Patience and hard work from Mario Balotelli were the orders from the Liverpool manager before the club’s first Champions League tie since December 2009. Both qualities underpinned Liverpool’s fortunate stoppage-time victory over the champions of Bulgaria, delivered courtesy of the latest European rescue act from Steven Gerrard, and gave Rodgers’ team a platform on which to build in Group B, provided they heed the lessons. Javier Manquillo spared Liverpool a second successive bout of Anfield soul-searching – after defeat on Saturday – with his willingness to chase a lost cause in the 92nd minute and tempt the goalkeeper, Milan Borjan, into conceding a needless penalty.

Industry was required on a night when invention was sorely lacking from the Liverpool performance and, contrary to preconceptions, their recent £16m signing from Milan shared the workload. Balotelli’s exquisite first goal for Liverpool rewarded an encouraging display from the striker, albeit one that highlighted the need for the Italy international to fine-tune his understanding with those around him and vice-versa.

“You have to give Mario credit,” said Gerrard after his 40th European goal for Liverpool. “When you are trying to find a breakthrough you keep going and he did. Great strikers need only one chance and he took it. A lot of people were wondering what we were going to see from Mario in terms of his work-rate and what he gives us off the ball but we saw tonight how hard he worked.”

Five European Cups appeared on a Kop mosaic before kick off, a reminder to the rest of the competition of the history behind the “newcomers”, while the Ludogorets delegation in the front row of the Anfield directors’ box filmed the show on their phones. Liverpool would not be Champions League tourists, their manager declared, though it is sometimes necessary to adapt to different customs. A whistle-happy Slovenian referee, enterprising opponents, the need for composure and to play to Balotelli’s strengths were all part of the adaptation process for Liverpool.

Rodgers raged at the failure of Dejan Lovren and Simon Mignolet to prevent Dani Abalo equalising in the 90th minute but, with the luxury of hindsight and three points, this was exactly the test he had warned about after Saturday’s defeat by Aston Villa. “We usually start quick but we need to learn that, if we don’t get goals in that early period, we need to be patient,” he said. “That challenge will come again, teams won’t want to open the game up against us and will rely on a set-piece or a counter-attack and that is something we need to work on.”

Given Liverpool’s response to kick off, when six red shirts surged forward, they were evidently anxious to avoid a repeat against the Bulgarian champions but Anfield is still awaiting one of the fierce attacking spells that demolished teams so quickly and emphatically last season. Comparisons between Balotelli and Luis Suárez are futile and unfair but their contrasting styles offer an explanation for the current difficulties in breaking down teams on home soil. Whereas Suárez’s manic energy and relentless endeavour stretched defences from the start last term, creating space and chances for his team-mates in the process, Liverpool are adjusting to the Italian’s more languid style. The absence of Daniel Sturridge through injury has also disrupted the intuitive understanding in the Liverpool attack.

Liverpool’s patience could not be faulted as they pursued all angles for a breakthrough. It was the full-backs, Manquillo and Alberto Moreno, who created the clearer openings with a series of inviting crosses far more than usually seen at Anfield under Rodgers, and it was from the latter’s delivery that Balotelli opened the scoring on his third appearance for the club.

Rodgers reverted to a diamond on 67 minutes by introducing Fabio Borini alongside Balotelli and shifting Raheem Sterling in behind. It almost paid immediate dividends when Borini met Manquillo’s inviting cross with a clean header that Borjan tipped over but it was Liverpool were reprieved when Roman Bezjak struck a post with 18 minutes left and made the most of the let-off. Ten minutes later Balotelli, with his back to goal and Cosmin Moti in close company, killed Moreno’s left-wing cross with his first touch, turned the ball inside the defender with his second and flicked a beautiful finish beyond Borjan into the far corner.

His impact was almost forgotten amid the madness of the final seconds but it was an emphatic reminder of why Rodgers perceived the 24-year-old as a calculated risk worth taking.