The first leg, you suspect, went just as Antonio Conte would have wanted it to go – apart from the bit about not playing a square ball across your penalty area to Andrés Iniesta with 15 minutes of a Champions League match remaining.

However, that is the problem with great tactical plans: they always rely, ultimately, on that most fallible of species: humans.

Lionel Messi’s equaliser has tipped the tie Barcelona’s way, but Chelsea can draw great encouragement from the first leg and, having operated like the away side, can play the second in much the same way.

This is not the fluent, relentless Barcelona of the Pep Guardiola years. It is not the outstanding improvisational forward line of the Luis Enrique period.

It is something far less expansive – Barça have conceded only 11 goals in 24 league games this season – and a little slow. The jibes about an over-dependence on Messi may even, in a creative sense, be halfway to being true now.

Jordi Alba has been hugely important to Barça this season, pounding up the left flank to offer width as Iniesta plays narrow in the asymmetric 4-4-2 Ernesto Valverde has come to favour.

The full-back is sixth in the list of top assist-makers in La Liga, his link-up with Messi a regular feature. But against Chelsea Alba did not make a single key pass and put in only three crosses.

Although he was on the ball regularly he did not have it in dangerous areas. Chelsea stifled him.

He had 110 touches, roughly as many as Sergi Roberto and Iniesta, significantly fewer than only Sergio Busquets and Ivan Rakitic and twice as many as any Chelsea player other than Victor Moses, who had 58.

In part that was a result of Chelsea sitting deep after a frenetic early press and denying the full-back space to run into behind their backline but that is hardly a situation Barça are unused to facing. More specifically it was to do with Moses.

It is no coincidence he touched the ball more than any other Chelsea player, driving Alba back not just through diligent closing but also with the threat of his partnership with Pedro.

Conte’s biggest selection decision was to select Eden Hazard as a false nine, rather than using Olivier Giroud or Álvaro Morata as a more orthodox centre-forward.

That did, perhaps, deny Chelsea an easy outlet and there were times, in the first half especially, when it seemed they could not get out of their half and might be overwhelmed. But the positive was it gave them pace and flexibility when they broke.

That is a major concern for Barcelona who at times were made to look flatfooted and pedestrian.

Busquets has enjoyed something of a return to form this season but the weaknesses exposed against Paris Saint-Germain and Juventus a year ago were on show again.

He was never quick – his great strengths are his reading of the game and his capacity to play within himself – but his lack of mobility must be a major worry.

Willian’s switch on to his right foot before his first shot against the post is perhaps, like Arjen Robben cutting on to his left, one of those moves that is both predictable and almost impossible to stop, yet the amount of room Willian generated with one step inside was startling.

Busquets might argue, with some justification, that before the second shot against the post he had reason to expect Barça not to squander possession in the right-back area but there was something symbolic, poignant even, about his vain scrambled attempt to get back.

Wherever the fault lay in that instance, or for the goal as Willian was left untended at the edge of the box, the basic fact is no opposing player should be allowed time to line up a shot on goal from a central position 25 yards out, never mind three times in the space of about half an hour. 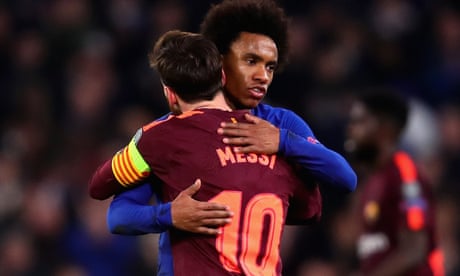 Equally concerning for Valverde must be the times Chelsea broke in the centre with one player, usually Willian, surging with the ball behind the midfield line at an exposed defence.
What is a little baffling is the switch to 4-4-2 should, in theory, have added an extra player into just that zone. Something in the relationship between Busquets and Rakitic, perhaps, is a little awry.

Chelsea had 27% possession, one percentage point less than they had in the first leg against Barcelona in the 2012 semi-final, yet the games were very different.

Back then, Chelsea were under siege for the majority of the game, clinging on, resisting, grateful for any release of pressure. On Tuesday, they were probably the better side and certainly had more clear-cut opportunities to score.

They go to the second leg as outsiders but in the knowledge this Barcelona are not to be feared in the way past iterations were and that, impressive as their defensive record is, there were times when they looked distinctly vulnerable.