Barca, Luis Enrique: any way back?

“We tried to score to get back into the tie but they got the third goal, and then the fourth,” the Barcelona manager, Luis Enrique, said at the end of his darkest night. His words were telling, but not even entirely true.

It was not that Paris Saint Germain had scored a goal; it was that they had scored a third and then a fourth, and anyway it was not as if the visitors had been caught chasing the game, a quick counter or some fluke goal cruelly ending it. When Angel Di María curled in the third, the finish was as calm and precise as the move that led to it, a portrait from the Parc des Princes. A portrait of Barcelona, too. 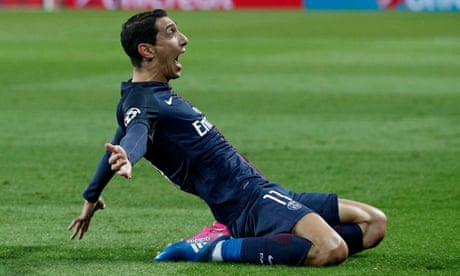 There were many of them, defining images. Leo Messi losing the ball, stopping and then watching PSG escape to score was the most seized upon. Or the ease with which they were overcome, one after the other all the way to Andrés Iniesta, for the third on 55 minutes.

Barcelona’s resistance had not been broken there, their rebellion suddenly over, as Luis Enrique implied, and it did not continue thereafter; it never truly began. Ten minutes earlier, the second half had started, a second chance; instead there was another portrait, perhaps the most powerful of all. Barcelona had the kick-off and immediately lost the ball. They had not even escaped the centre circle, still less PSG.

Overwhelmed, unable to react, Barcelona were taken apart. On the television, the sound was out of sync, trailing the images. As Jonathan Wilson put it: “PSG are so much quicker here, it’s like they’re playing to the commentary and Barça to the pictures.” Nor was it only pace or intensity, although this was their 13th game in 41 days and Iniesta certainly was not fully fit. Sergio Busquets, moreover, never fast, looked slower than ever and is enduring the worst season of his career.

No, it was their play. The third PSG goal came out from the back, something that is supposed to define Barcelona’s style but something that they were never able to do during the Champions League tie.

At the end, Iniesta said that Barcelona did not have “clear ideas”. At pitchside, Busquets talked about “tactics and planning”. Barcelona had been surprised, he admitted, although Luis Enrique, who ended up confronting a reporter, disagreed. This is the end for him – and not just because of this dreadful night.

Barcelona had only one shot on target. Isolated, Messi had fewer touches in the first half than in any half for the past eight years. Neymar ran at PSG, but ran alone. At the other end, Marc-André ter Stegen made six saves. This was the worst defeat that Barcelona have suffered under Luis Enrique but the best thing about it might have been the score. It could have been greater. The manager called it a “disaster” – the word El Mundo Deportivo splashed across its front page. Its counterpart, Sport, went for “This is not Barça”.

But here’s the thing: it is. The debate about Barcelona’s identity has never gone away – even in good times – and it has grown louder, more extensive, of late. Luis Enrique does not appreciate being told but he cannot say he was not warned. In fact, the warnings have been repeated. This result was coming: not a 4-0, but a defeat and the manner of it. Unai Emery could not fail to spot Barça’s vulnerability; the PSG manager’s success was in exploiting it so completely, leaving Barça so utterly exposed.Barcelona stand second in La Liga, trailing Real Madrid despite having played two games more. Some opponents have waited deep, Alavés and Malaga both earning points at the Camp Nou that way, but others have begun pressing them. Barcelona have struggled to overcome an approach that they once welcomed, unsure of their ability to play through the pressure. Celta Vigo overwhelmed them; for much of the game so did Sevilla and Betis.

They reached the Copa del Rey final but had to hang on against Atlético. There will be those who blame Messi for Tuesday night, but for much of the season he has disguised Barça’s flaws, of which there are many.

Those run from the club to the coach and the squad. There is a self-destructive nature to Barcelona that never goes away and emerges ever stronger in moments like this, a mutual mistrust that magnifies the fault-lines and widens the divide. Trust in the board is falling; there have been five directors of communication now. Signings have not convinced and the ecosystem does not comfort. There is no recognised right-back, an ageing midfield, fewer youth-team players making it through, and the strength in depth they claimed to have brought in does not look strong at all. 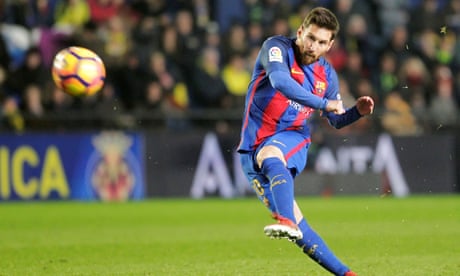 All of which feeds into something deeper: Barcelona have the players but what is the plan? The answer often offered up is Messi. But even Messi – heading towards the final year of his contract, a new deal still unsigned – cannot always rescue them. And in Paris, he too was stopped.

There is a puritanical streak to much of the criticism and there will be a backlash against the front three of Neymar, Luis Suárez and Messi, as if this defeat is the fault of their best players, footballers who led them to a treble and then a double. That is unfair and ignores the culpability of other players, but there is something in the idea that the evolution that they allowed, the faith in their talent, was potentially a regression. Instead of being a variation on a theme, it became the theme. In El Pais, Ramon Besa one of the most important “ideologues” of a particular Barcelona faith, claimed that the club had “sold its soul to the tridente”. Their ability enables other, systemic issues to go unaddressed.

Above all, there is criticism of Luis Enrique, the visible representative of a club in which some do not believe, and a man who they think does not believe in them – a man Besa accuses of having “no respect” for the club’s “essence”. The criticism is fierce, and he feels it. On Tuesday night he spat: “We could have done handstands and the same would have happened.”

Sport described Barcelona as a “shipwreck without a manager”. El Mundo asked readers if they remembered that team who “respected the ball”, that reigned through an “endless series of indecipherable passes” and “cared for and nurtured the midfield”. The verdict was damning: “It no longer exists.” Juan Jiminez lamented in AS: “Barcelona used to be something else, something healthier.”

His colleague Santi Giménez wrote : “Barcelona lost more than a football match in Paris. They were stripped bare, leaving exposed the sad reality of a team that is a mess tactically, physically and emotionally. There is no plan, no youth system, a lack of leadership, the style has been trampled upon, there’s no direction at all, and all the coach can cling to is his record [but] he sold a story that was guillotined in Paris, where the emperor stood naked. It is not that Barcelona are out of Europe; it is that Barcelona are out of Barcelona.”