Barry-Eddie combo: what a promo force!

April is a huge month in the money-spinning world of Barry and Eddie Hearn and the father-and-son promotional duo are in knockabout form. Eddie saunters into his dad’s office in Romford and says: “How was Miami?”

“Great,” Barry beams as he rocks in his chair, having landed at Heathrow a few hours earlier. “They’re going crazy about you selling 90,000 tickets for Joshua-Klitschko. They can’t believe it. Where’ve you been?”

“Monaco,” Eddie says as he sits down at his dad’s desk. Barry will run the world snooker championship from Saturday in Sheffield but the 68-year-old chairman of Matchroom Sport is beaming because his 37-year-old son is about to promote one of the biggest nights in the history of British boxing. On 29 April Anthony Joshua defends his IBF world heavyweight title against Wladimir Klitschko before a sold-out Wembley Stadium and a pay-per-view audience which should exceed a million buys. 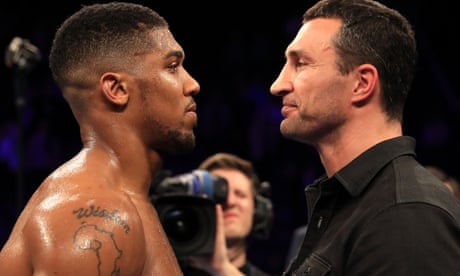 Despite having access to a private jet on a recent trip with Joshua to America, Eddie winces in amusement. “I was on easyJet from Nice yesterday and me and Frank, who works for me, were in the last row. My arse just about fits but my knees won’t go flat. I said to Frank, who also went on the private jet: ‘Fucking hell, where did it all go wrong?’”

He and his father burst out laughing before Eddie says: “We could buy a private jet tomorrow but it doesn’t feel right. It’s about value for money.”

The Hearns pride themselves on a flash exterior but a grounded practicality on the inside. Barry, who became an accountant after his mother persuaded him the profession would transcend the limited opportunities of his working-class background, leans forward. “When I was growing up I used to dislike people from better areas because I had a chip on my shoulder. I might still have it [he laughs]. But I didn’t want my son to grow up like one of those rich kids. So I thought the easiest way was to have a little set-to.”

Barry returns to the moment when he fought his son in the ring. “It was due to happen when I was 18,” Eddie remembers. “But it happened at 16 because I got so big. He came out, his teeth gritted. He was really going for it.”

“I wanted to find out what you were like,” Barry says. “I hit him with a proper shot. It was great because he came back and dropped me twice in the second round. It was the best defeat I ever had. That competitiveness is how we run our business.”

But Barry meddled in Eddie’s brief amateur boxing career to protect him. “My first fight was in Dagenham,” Eddie recalls. “I was introduced in the ring and was really excited and giving it the big one. But they said: ‘In the blue corner …from Billericay … Eddie … Hills!’”

Hearn Jr mimics his outrage. “I won a scrappy fight. The floor was carpet tiles so every time you went to throw a punch they’d come up. I was buzzing but said to dad: ‘I can’t believe they got my name wrong.’ He said: ‘I told them to call you Eddie Hills otherwise they’d try to give you a pasting because of me.’”

Barry grins. “The bigger reason was he went to a public school and he was a spoiled kid. He wasn’t a great student.”

Eddie nods cheerfully. “I played a lot of sport instead.”

But Eddie was bright and soon swapped his boxing gloves for selling double-glazing on the phone. “I worked for Weatherseal in Romford. I’d go there after college at night and do telesales. It’s the worst job in the world but the best training for sales. For every rejection we had an answer on a list – from ‘I’ve just lost my husband,’ to ‘I’ve just done my double-glazing.’ We always had a reason to make an appointment.

“I was on £3 an hour but for every appointment you got a £5 bonus and your money went up by £1 an hour. So every booking was worth £7. But then I did work experience for dad at 17. I was selling sponsorship in fight magazines, which was a doddle compared to phoning some geezer about double-glazing who says: ‘Fuck off, I don’t want to talk to you.’”

Selling Joshua-Klitschko is also easier and Barry believes, “it could be the biggest [British] pay-per-view fight of all time.”

“That was at five in the morning,” Hearn Sr says. “This is primetime.”

“All you’re lacking in this fight is the bad bloke,” Eddie says. “Boxing people go: ‘How refreshing.’ But I might think: ‘AJ, hit him at the press conference.’ No chance. He’d laugh at you. But it’s huge anyway. I’m actually concerned about Klitschko as it’s a complete 50-50 fight.’”

After only 18 bouts it is hard to know if Joshua is as good as early indications suggest. Klitschko is long past his best, at 41, but he is a proud and intelligent former world champion.

Hearn Jr might be cranking up the promotion but he also makes some salient points. “AJ has youth, power, speed. When it comes to experience, it’s all Klitschko. This is his 29th world title fight and he don’t need the money. He’s obsessed with winning back his world title.”

“My bet is AJ walks through him” Barry says. “Klitschko is too old and too slow. AJ has got the one asset in a heavyweight I haven’t seen since Ali and that’s his hand speed.”

But Ali had a chin to match his hand-speed. Does Joshua? “Everybody can go over if you hit them right,” Barry says. “Some, like Amir Khan, go over if you sneeze at them. I’m not saying AJ’s got a granite chin. But by the time you throw a shot at him, he’s hit you twice. The time it takes Klitschko’s brain to say, ‘Throw a jab followed by a right,’ is the moment the fight is over.”

Eddie shakes his head. “You underestimate Klitschko’s footwork. He’s clever and horribly awkward. The one thing AJ has got which might work to his advantage, or disadvantage, is fearlessness. He will unload 10 shots without fear of reply which could be a problem against an excellent counterpuncher like Klitschko – who hits hard.”

Barry remains the chairman of Matchroom Sport – an empire built on his relentless work with snooker in the 1980s, and then boxing, before his staggeringly successful reinvention of darts. Matchroom now promote 11 different sports and their last set of company accounts recorded a turnover exceeding £70m with an annual profit over £7m.

“We have 541 event days this year and we’ll transmit 40,000 hours of television,” Barry says. “Snooker, for example, is booming. I’ve been back in it seven years and the ratings are 25% up which is amazing because everywhere else they’re 10% down. But snooker will never get back to what it was in the 1980s. Snooker players today are the introverts of sport.”

Eddie shrugs. “They’re robotic. Now there’s more money, it’s more serious. Instead of getting pissed and throwing a plant pot at someone, the modern snooker player is in bed at eight with his eye mask and glass of milk. It’s like golf. Name me a character in golf. They finish a round and then do strength-and-conditioning before an early night. It’s boring.”

“Sport is personality-led but, unfortunately, personalities don’t win anymore,” Barry says. “The guys that live their lives recklessly don’t get success. Ronnie O’Sullivan, a genius, is the exception. I wish I had six more like him.”

Barry is pragmatic towards snooker but more passionate about boxing and, especially, darts, which he describes as “the best thing I’ve ever bought”.

Hearn Jr says: “When we took over darts you’d go to Circus Tavern for the world champs and if you didn’t have a sovereign ring and a tattoo you weren’t allowed in. That was just the women. Now young women dress up for a night out at the darts.”

His father grins. “It’s classless. Of course it’s not as addictive as boxing – which is so much better now. When I was doing boxing we were in leisure centres with 800 people and most of the customers look like that [he flattens his nose into a splattered pancake]. Now Eddie sells 20,000 tickets for fun on the back of his Twitter following.”

As the world changes, so does sport. Would they move into e-sports? “We only get involved with sports we have a passion for,” Barry suggests. “No passion, no point is our motto. I’ve never played a computer game.”

Eddie is much closer in age to the gaming superstars but remains bemused. “How can you have 20,000 people in an arena watching one geek play another at Fifa? We’re so good at selling boxing because we love it. Boxing is the greatest sport by a country mile. But these gamers have incredible followings and things are changing. We have boxing at York Hall and from 7 to 10 it’s live on Facebook and gets half-a-million viewers. Then we switch to Sky Sports for two title fights and get 100,000 viewers. Younger fans consume sport differently.”

How do they feel about the rise of UFC? ‘People are trying to lure us in’

How do they feel about the rise of UFC? “People are trying to lure us in,” Eddie says. “I don’t mind MMA and I’ve been fascinated by Conor McGregor from a business perspective. McGregor is one of the world’s best MMA fighters but I’ve got kids at York Hall who would beat him hands down in a boxing match. And he’s fighting Floyd Mayweather? That’s the biggest boxing mismatch ever but if they need a promoter, give me a call. I’d snap it up.”

“MMA is not a top priority,” Hearn Sr says. “But in five years Eddie will step back from boxing and take a more corporate role within Matchroom – with people reporting to him just like he reports to me on boxing now.”

Will that mark the moment when a booming family business floats on the Stock Exchange? “I can’t rule it out,” Eddie says. “But dad always says: ‘When I die, if you sell this business I will curse you from the grave.’”

Barry lets slip a ghostly smile. “We’ve had some very substantial offers the last few years. The fact we can say: ‘We own the snooker, we own the darts’ makes us worth an awful lot of money. But I still want to go to work at eight in the morning. So I told this particular person who wanted to buy us out: ‘You’re wasting your time.’”

They break out into cackling laughter. “I don’t think that’ll actually happen,” Barry says, looking at his son. “I think he’s too much like me to give it up.”