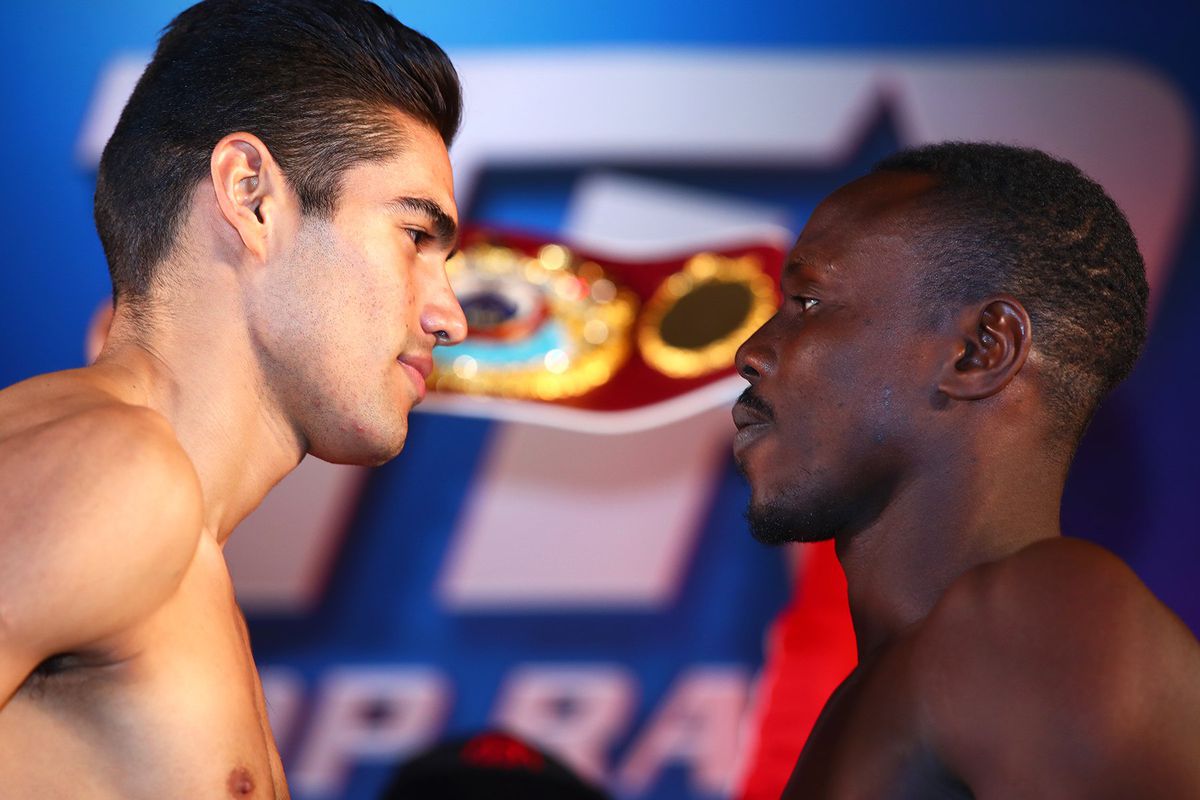 THE FACE-OFF: Ramirez and Ahmed locked in a stare-off The fight took place on Saturday, February 3, at the American Bank Center in Corpus Christi, TX, and was televised live and exclusively at 10:30 p.m. EST on  ESPN and ESPN Deportes and streamed live on the ESPN App.

Promoted by Top Rank®, in association with Zapari Boxing Promotions, tickets to the Ramírez-Ahmed world championship event were priced at $152, $102, $62, $42, and $27, including facility fees. Ramírez, a two-fisted super middleweight wrecking machine, made history in the co-main event to the Manny Pacquiao vs. Timothy Bradley welterweight pay-per-view on April 9, 2016, when he became México’s first fighter to win a super middleweight world title.

Entering the fight as the top world-rated contender, Ramirez gave a virtuoso performance over the defending WBO champion, Arthur Abraham, a-three-time world champion in his own right, all three judges scoring it a 120-108 blitzkrieg.

“I took him to Méxican boxing school,” a jubilant Ramírez boasted as he put on the world championship belt .

A sensational young champion, Ramírez had been scheduled to make his first title defense in July 2016, but a training camp injury to his right hand followed by surgery and rest sidelined him for the remainder of the year. A former Ghanaian super middleweight champion, Ahmed had won eight of his last nine fights by knockout, including the six-bout victory-by-knockout streak he had enjoyed.

In his previous fight on March 17, 2016, Ahmed stopped Philip Kotey in the 11th round to capture the vacant WBO Africa super middleweight title. THE BRAVADO BEFORE THE SALVO: Habib Ahmed running his mouth at a prefight function for what turned out to be a Ramirez mauling.

Round 1: Ahmed comes out keeping a far distance from Ramirez. Ramirez catches Ahmed with a left hand. Ramirez looks so much bigger than Ahmed in there! Check right hook lands for Ramirez but he didn’t put much on it — probably wishes he did. Ramirez pressing Ahmed, trying to impose his size on Ahmed a little. A couple of left hands lands for Ramirez. Ahmed really focused on his defense but isn’t able to land many clean shots. Ramirez 10-9.

Round 2: Both fighters miss a number of shots to open the round. Straight left to the body lands for Ramirez. Ramirez has Ahmed moving backwards but he stands his ground a little now and lands a couple right hands. Hard straight left lands for Ramirez. Ahmed attacks back right away with a few punches. Ramirez closes in on Ahmed and strafes him along the ropes with a number of punches. Ahmed tries a double right hand but it doesn’t land with much pop. Ramirez 10-9, 20-18.

Round 3: Ramirez stalking Ahmed and lands a couple body shots to both sides. Ahmed attacks back but mostly catches Ramirez’s guard. Now Ramirez presses forward again and Ramirez is bleeding from his left eye. Referee calls a timeout and rules the cut came from an accidental head clash. Ramirez looks like he wants to make an impression now and attacks Ahmed along the ropes. Hard right uppercut to the body lands for Ramirez and he’s starting to hurt Ahmed! Ramirez 10-9.

Round 4: Ramirez comes out pressing Ahmed again and touches him with a stiff jab. Ahmed laying back and looking for counter opportunities but is having a little trouble finding what he’s looking for. Ramirez attacks again and land s a few punches as he has Ahmed along the ropes. A few more hard shots land for Ramirez. Ahmed needs to stay off the ropes but is finding himself on them more and more as the fight progresses. Ramirez throwing combinations and Ahmed sneaks in a couple singular shots. If Ramirez could cut off the ring a little better he might have Ahmed in serious trouble right now. He still wins the round. Ramirez 10-9, 40-36.

Round 5: Ahmed needs to change something up in this fight quickly. Ramirez pounds Ahmed on the ropes and it’s taking a toll. Ahmed not even trying to keep off the ropes much at this point. Hard shots to the head and body rock Ahmed! Ahmed shows a good chin to take those shots. Ahmed purely on the defensive, trying to survive. Ramirez is really putting a beating on Ahmed now. Hard left hook lands for Ramirez with Ahmed on the turnbuckle. Ahmed is getting walloped. Ramirez 10-9.

Round 6: Ramirez chasing Ahmed around the ring but Ahmed is able to evade some bid shots. Now Ramirez lands some good shots to the body and Ahmed is a stationary target. I think his legs are basically gone. This fight should be nearing an end. The referee should step in and stop this! Ahmed is basically running away from Ramirez as he takes a frightful beating. This is disgusting. Stop it now, it’s not even competitive. Now Ahmed’s corner throws in the towel. Finally! Ramirez TKO-6.