LA Galaxy forward Landon Donovan has compared the first of Emmanuel Boateng’s two strikes against Real Salt Lake to that of a goal Lionel Messi would score.

Boateng scored twice for Galaxy as they won 3-1, Wednesday, to advance to the MLS Western Conference semifinals.

Alan Gordon’s opener for Galaxy was cancelled out by a Joao Plata penalty, before Boateng went on to hit two goals in eight minutes to secure the victory for his side, with his first strike, in which he weaved his way past a number of opponents and then poked home, catching the eye.

“If [Lionel] Messi scored a goal like that, people would be talking about it for weeks,” Donovan said on MLS’ official website.

“These guys have been telling me, since I’ve been back, that he has that in him. He was terrific and we need him to play like that.”

Boateng’s second strike was also impressive as he cut in from the right before curling the ball into the bottom corner from a tight angle. 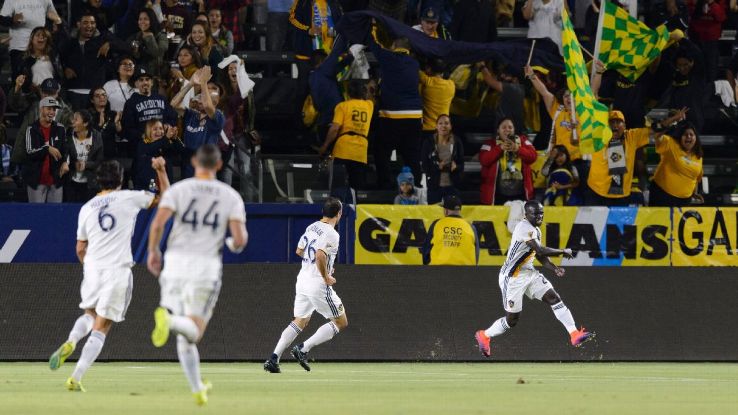 Galaxy head coach Bruce Arena praised Boateng’s performance and said he did well to recover after conceding a RSL penalty for a foul on Javier Morales.

“We’ve been looking for him to break out a little bit and he did today. I think he had two great goals.

“He really didn’t foul the player on the penalty kick, which was unfortunate, but I think it got him a little angry and he made up for it for sure.”

Boateng said his second goal came about after he switched wings with Donovan — a player the 22-year-old is keen to learn off at Galaxy.

“He [Donovan] talked to me about it [switching flanks] during practices,” Boateng said.

“He thought it was good to give the defence a little different look. I think it helped us.

“We got the third goal with the first ball I got on that [right] side. I’ve just got to keep listening to that guy.

“I think he knows what he’s doing.”