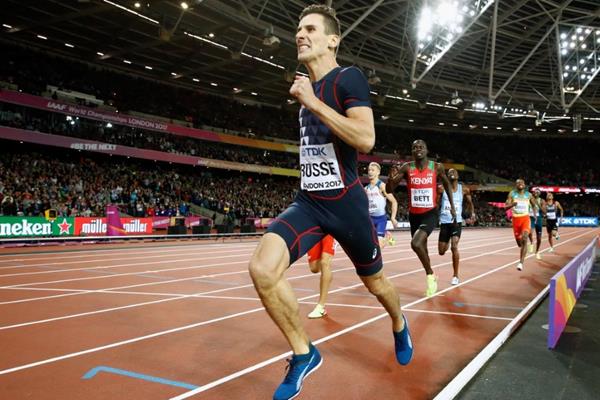 Just as he had in the semifinal on Sunday, France’s Bosse benefited from world U20 champion Kipyegon Bett’s pace-making. But this time around, the Frenchman powered away from the tiring Kenyan to take his first global championships medal in a season’s best of 1:44.67.

“I could not understand why nobody was going past me,” said Bosse, who only advanced to the final as a non-automatic qualifier.

“Even when I crossed the line, I could not believe it. The others killed themselves and they were already dead in the last 100 metres.”

Nineteen-year-old Bett had led the race from the gun and was rewarded for his efforts by holding on for bronze in 1:45.21. Meanwhile, European champion Adam Kszczot came through strongly for silver in a season’s best of 1:44.95, repeating his position from two years ago in Beijing.

Roared on by the home crowd, Great Britain and Northern Ireland’s 2015 European U20 champion Kyle Langford stormed through from seventh to fourth in the final 100 metres, missing out on bronze by 0.04 in a lifetime best of 1:45.21.

It was business as usual for defending 400m champion Wayde van Niekerk, who completed part one of his 400m/200m double attempt, with a comfortable victory in 43.98.

“It is amazing to win the world title. It is a blessing,” he said.

“I hope the fans enjoyed that. I’m used to the lactic (acid in legs) but I need a few minutes to recover from that effort and I’ll be fine. I’ve got a good team who will help me recover well for the 200m and I’m looking forward to that.

Having set a national record of 43.89 when qualifying fastest from the semifinals on Sunday, Steven Gardiner of The Bahamas took silver in 44.46 for his first global championship medal, while Qatar’s world indoor silver medallist Abdalelah Haroun came through strongly on the home straight to snatch bronze in a season’s best of 44.48 from a fading Babaloki Thebe of Botswana (44.66). Haroun became the first Asian medallist in the men’s 400m at an IAAF World Championships.

In 2012 the London Stadium played host to Barbora Spotakova’s second Olympic title. Tonight it was the setting for her second world title.

The 36-year-old, who earned Olympic bronze in Rio last year, took her major championships medal tally to 10, having also collected a gold, silver and a bronze from the European Championships.

However, the decorated Czech thrower was pushed all the way by 2008 world U20 silver medallist Li Lingwei, who threw a lifetime best of 66.25m for silver in the third round. Fresh from her Asian record in qualification, 2015 world silver medallist Lyu Huihui threw 65.26m in round five to snatch bronze from Olympic champion Sara Kolak of Croatia (64.95m) and ensure two Chinese athletes would be on the podium.

Olympic silver medallist Sam Kendricks has been the dominant force in the pole vault in 2017 with 10 straight victories. Here at the IAAF World Championships London 2017 he backed up his form by taking his first global title with a third-time clearance at 5.95m.

“My goodness, I have never been in a competition like it,” he said.

“The crowd gave everything in their hearts to support me. It is all part of a mission for me. I make a goal and chop it down to make it attainable. I’ve finally got that world title and I could not be happier.

Poland’s European indoor champion Piotr Lisek took silver with a first-time clearance of 5.89m, ahead of world record-holder Renaud Lavillenie of France who cleared the same height but on his second attempt.

The two-time world indoor champion and 2012 Olympic champion had missed months of training earlier this year due to a back injury, but he went all out to win his first outdoor world title, passing his final attempt at 5.95m and raising the bar to 6.01m in an attempt to dislodge Kendricks from the top spot. However, he knocked the bar down, adding fourth world outdoor bronze to those he collected in 2009, 2011 and 2015.

Conseslus Kipruto gestured to the crowd in the closing stages of the steeplechase as the Kenyan added the world title to the Olympic gold medal he won in Rio last year.

“I used my plans well and last night for morale I told myself: ‘I am Olympic champion and that others must break me’,” said Kipruto, who has battled injury throughout this season.

“There are others who are strong, but I knew if the race was around 8:10 that I was going to win.

In contrast to Kenya’s medal sweep in Beijing two years ago, it was the first World Championships men’s 3000m steeplechase since 2003 when three countries have been represented on the podium.

After placing fourth at the Olympic Games last year,  21-year-old Elbakkali earned his first global medal, while third-placed Jager became the first US man to earn a World Championships medal in the steeplechase.

In the women’s 400m hurdles semifinals, defending champion Zuzana Hejnova will be bidding to win her third consecutive world title, qualifying fastest for Thursday’s final in 54.59.

In the women’s 200m heats, the three fastest qualifiers are all athletes doing multiple events at the IAAF World Championships London 2017.

Defending champion Dafne Schippers made a strong statement as the fastest qualifier, clocking an easy 22.63 for victory in heat two.

Olympic 400m champion Shaunae Miller-Uibo showed a good turn of speed over the shorter distance ahead of her one-lap final tomorrow evening, clocking 22.69 for victory in heat four.

Recently crowned 100m silver medallist Marie-Josée Ta Lou was the winner of the sixth heat, almost 0.40 ahead of her nearest rival in 22.70.

World silver medallist Gong Lijiao from China made light work of qualification in the women’s shot put, recording the longest mark of the evening with 18.97m in the first round.

Olympic champion Michelle Carter of the USA and Hungary’s Anita Marton qualified next with 18.92m and 18.76m respectively.