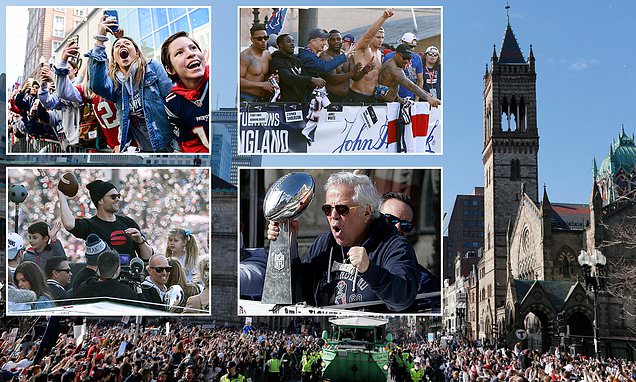 Hundreds of thousands of jubilant fans descended on downtown Boston on Tuesday for a parade celebrating the New England Patriots’ sixth Super Bowl title, and chanting ‘We want seven!’ and ‘Next year, right here!’

A party atmosphere engulfed the city as fans wearing Patriots shirts and scarves packed the streets in the mild weather and stood on tiptoe for a glimpse of quarterback Tom Brady, coach Bill Belichick and the rest of the team. Red, white and blue confetti rained down. 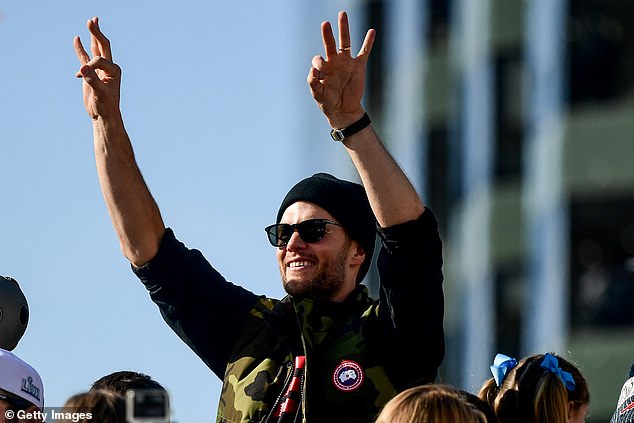 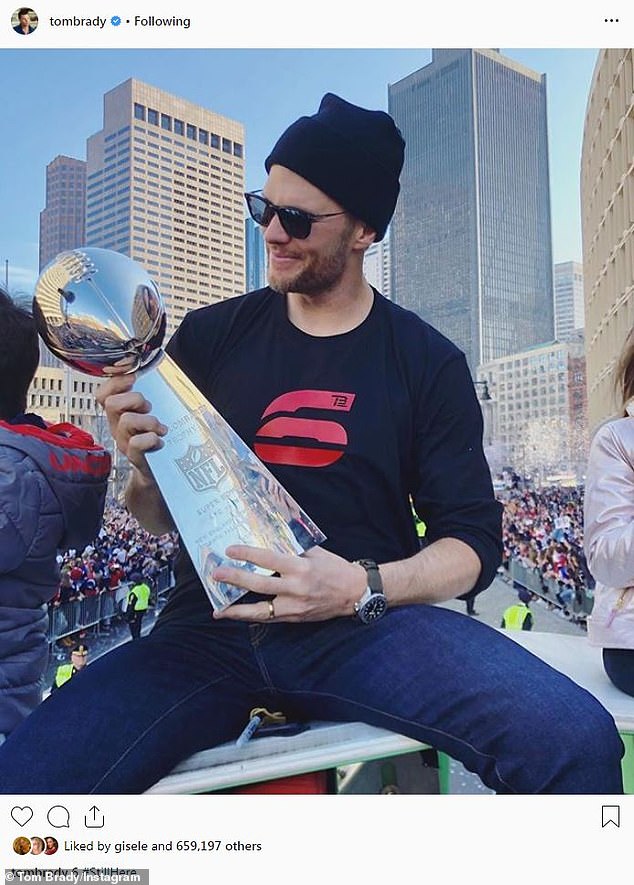 Brady posted a picture on Instagram with the trophy, commemorating the historic win

It’s a familiar feeling in Boston. The parade came just four months after the city feted the Red Sox for their fourth World Series championship in 15 years.

‘Getting to see Tom Brady again is always a special day, but the Patriots are amazing. Six-time champs,’ fan Lauren Mills said, adding that she still hasn’t had her fill. Her message to Brady: ‘Go for No. 7. He still has how many fingers left? You know, four more rings to go.’

Fresh from Sunday’s 13-3 victory over the Los Angeles Rams in the Super Bowl in Atlanta, team members and their families took a two-mile journey through the city aboard Boston’s iconic World War II-era amphibious ‘duck boats.’ 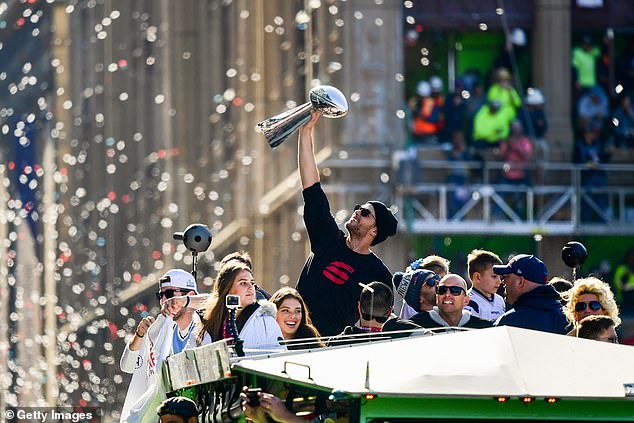 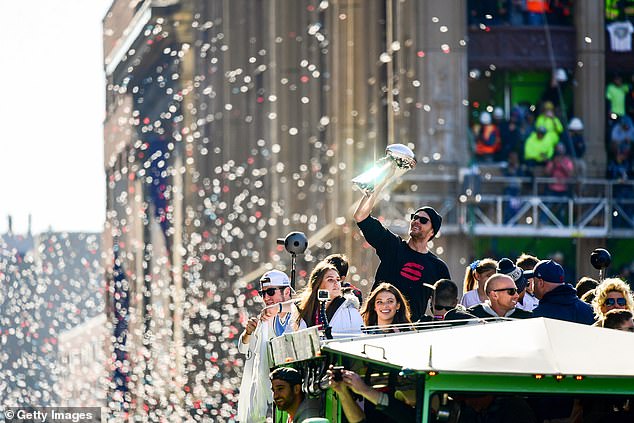 Brady held his daughter, Vivian, and they waved and grinned at the crowd as players and team owner Robert Kraft took turns holding aloft the Lombardi Trophy. Belichick and his partner, Linda Holliday, beamed, and the veteran coach saluted the fans.

Star tight end Rob Gronkowski, who has talked about retiring after this latest NFL title, whooped it up with his brothers and father. He and several other players removed their shirts and spent much of the parade cavorting bare-chested.

They waved large signs that read, ‘We Got Everything’ – a twist on the Patriots’ motivational hashtag, ‘Everything We Got,’ that had become a theme this season. 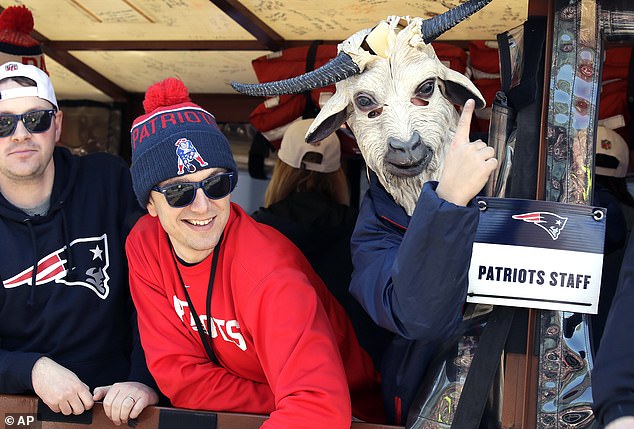 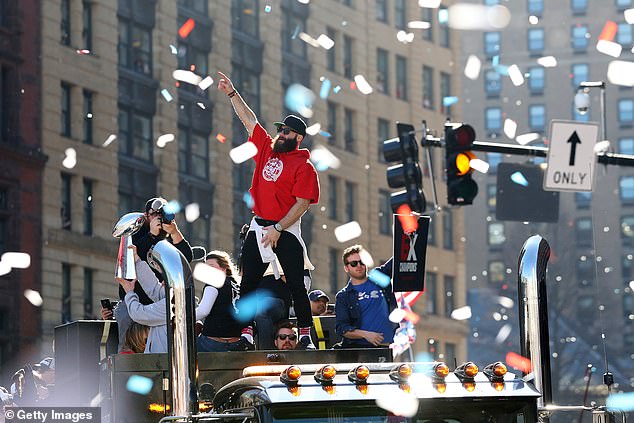 Patriots wide receiver Julian Edelman, who was named MVP, joins in the celebrations in Boston

At least one brave Rams fan, wearing the team’s blue and yellow jerseys, was seen along the parade route.

Officials expected 1 million attendees, and early trains and subways were jammed, overwhelming the Boston area’s transit system with what officials said was record ridership. The weather was unseasonably warm, with temperatures above 60 degrees (15 degrees Celsius) and dazzling sunshine.

Security was tight, and police took away several fans who appeared intoxicated, including one man on a stretcher. 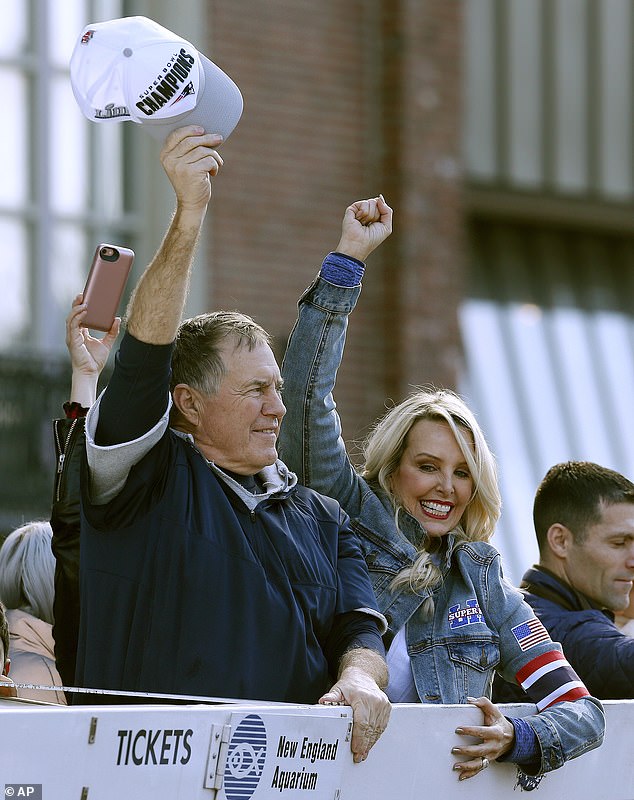 Unlike in past years, no post-parade rally with speeches was held. Officials didn’t elaborate on why.

Stephen Chhom, of Lynn, Massachusetts, was along the parade route overlooking the Statehouse with his friend Ricky Sok and Sok’s son, Raiyu.

‘What made this year special were all the other fans doubting us,’ Chhom said, wearing a Julian Edelman jersey. ‘The record speaks for itself. Tom Brady and the rest of the team prove themselves every single time.’ 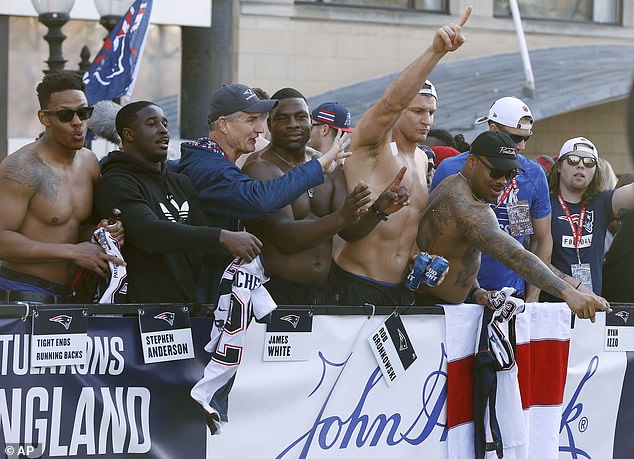 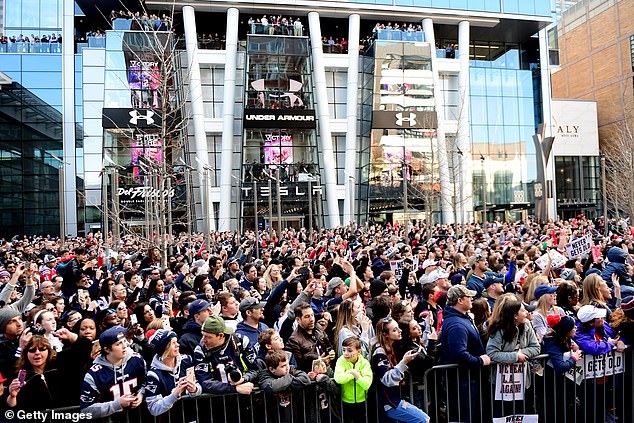