Everyone gets a gimme’ sometimes.

After two straight defenses of history’s middleweight crown against Gennady Golovkin, the second of which saw him regain the WBC belt and add the WBA strap to his mantle, Saul Alvarez (51-1-2, 35 KO) took his gimme’ last December.

Super middleweight Rocky Fielding may have had one of the WBA’s sub-titles to his credit but he didn’t prove to have any business in a ring with Alvarez.

It’s back to business on Saturday night (DAZN, 9 PM EST).

Alvarez will attempt his fourth defense of the lineal middleweight crown in a unification showdown with IBF titlist Daniel Jacobs (35-2, 29 KO). It’s a hell of a fight on paper.

Short of a third fight with Golovkin, it’s exactly the fight Alvarez should be expected to take in the role of fighting champion at 160 lbs.

In a perfect world, the recognized leader of a division should take on the men who best earn a shot at knocking them off their perch.

It doesn’t always happen that way.

It never always happened that way.

Many champions have, throughout the history of boxing, done their best to extend their title reigns and maximize their earnings before tackling the most dangerous foes. Much depends on where that champion falls in the box office pecking order.

Some fighters need their titles to make money.

Saul Alvarez isn’t one of those fighters. Alvarez is more than a champion. He’s a rainmaker. Boxing always has less of them.

They are the fighters who promise career high paydays for anyone who faces them; the names on a marquee that, when matched at highest profile, participate in generational superfights.

More than that, they are the battlers fans demanded a higher standard from. The perception is they can have any fight they want so any delay in a big fight can fall on their shoulders in the court of public opinion. 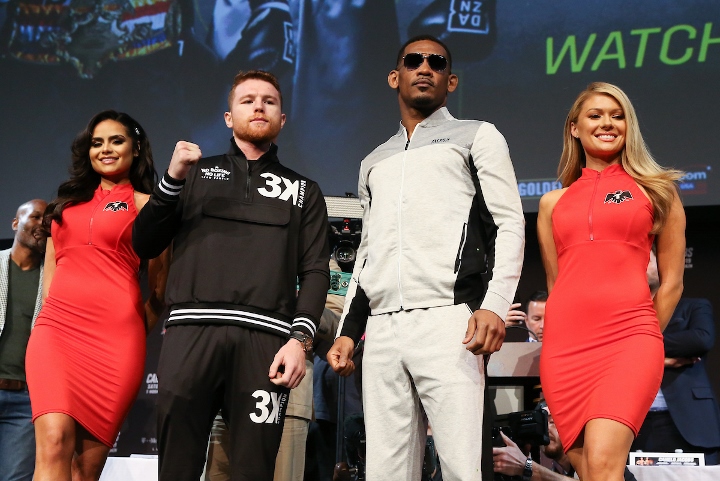 In 2019, there are two fighters under the age of 30 who have arguably reached rainmaker status: Alvarez and heavyweight Anthony Joshua. Joshua still hasn’t unlocked the US market. Alvarez is being asked to essentially create a US market for his primary distributor.

DAZN is banking on Alvarez being their key to making their over the top venture a household name in the states.

If he can win this weekend, the positioning of top middleweights around his streaming brand will allow for additional fights equal to or perhaps even tougher than Jacobs this weekend.

A rubber match with Golovkin and further unification with WBO beltholder Demetrius Andrade are more than enough to keep Alvarez busy and fans interested.

As long as Alvarez keeps winning, it also forces the division toward him in a way that allows for an overcoming of network and representation issues few others have.

The PBC and Alvarez’s promoter Golden Boy may not do tons of business together but if fan interest were to get stronger for a showdown between Alvarez and a Charlo brother or unified Jr. middleweight champion Jarrett Hurd, fighting Alvarez is too lucrative to think there would be too much resistance from the challenger’s sides.