Can’t Nobody Count Herring Out, Anymore

It was a weekend he had circled on his calendar for all of 2019 and Jamel Herring didn’t let it go to waste.

Scores were118-110 twice and 116-112 in favour of Herring, who dedicated the honour to the memory of his late daughter Ariyanah, who passed away at just two months of age and would have been 10 years old on this day.

“I just wanted to say Happy Birthday to my daughter, Ariyanah,” Herring told ESPN’s Crystina Poncher as he tried to gather his thoughts while soaking in the moment.

The date now serves dual purpose on the heels of his career-best performance.

Both boxers fought behind the jab in round one, each using it to set up straight power shots. Ito was short with his stick but effective in spots in following with right hands to the body.

Herring threw his jab with greater purpose, along with catching Ito’s attention with a straight left hand midway through the round.

Ito was much sharper with his right hand in round two, scoring on several occasions as Herring spent much of the frame avoiding the incoming more so than getting off his own punches.

The defending titlist was a bit overzealous with a wide overhand right late in the round, but still made a statement that he was here to be the aggressor.

His in-ring energy rubbed off on the fans in attendance, Local Japanese-American patrons as well as those who traveled abroad from Japan joined in unison as chants of “I-to” filled the venue, drowning out preceding “U.S.A.” chants in honor of the challenger as well as the patriotic holiday weekend.

The back and forth between fan bases among a beyond-capacity crowd of 2,912 proved more entertaining than the action in round three, which was fast moving but featuring little in the way of landed punches.

It changed for the better in round four, as Herring—who moved down from lightweight last spring—put his size advantage to use in scoring with left hands while sliding out of the way whenever Ito sought to respond with straight rights. 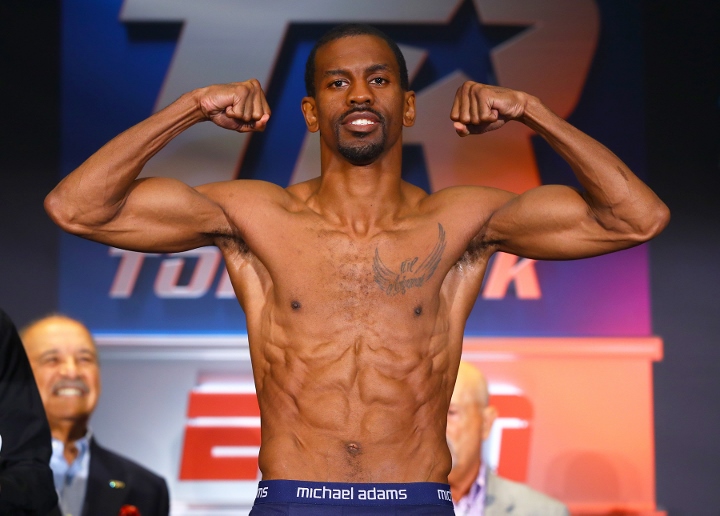 Round five was Herring’s best round to that point in the fight, ending the frame with a series of left hands and a sweeping right hook. The sequence bothered Ito more so than left him hurt, but certainly wasn’t helping keep the title in his possession.

Ito found mild success with right hands to the body, but any such momentum gained was short-lived. Herring shook off the blows, remaining dialed in with his left hand and tightening up guard anytime Ito looked to counter.

No matter how far Herring threatened to surge ahead, trainer Brian ‘BoMac’ McIntyre reminded his charge to remain humble and remember the basics.

Ito briefly exploited the lack of follow-through on the latter, scoring with a crisp right hand at the start of round eight.

The 28-year old from Tokyo enjoyed an advantage whenever the boxing fight transitioned into an inside dog fight, which was the case in the back half of round eight.

Herring returned to boxing in round nine, although without quite the same spring in his step.

Both boxers were battling fatigue, Ito fighting with his mouth agape while there wasn’t quite as much spring in Herring’s step as was the case in earlier rounds.

Stilll, the fighting Marine soldiered on, the title well within his sights as he returned to boxing in round ten.

The championship rounds were off to a slow start, but intensified over what was believed to be a knockdown scored by Herring.

Referee Frank Gentile saw the left hand land and Ito briefly stumble in touching his glove to the canvas, but correctly ruled that it was his right hand cupping the back of the titlist’s head which caused the fall.

Still, it left Ito with three minutes to provide something dramatic in order to avoid leaving his title in the city where he first claimed it 10 months prior. That moment never came, as Ito was off with his right hand and too fatigued to fight his way out of clinches.

Herring doubled up on his jab for good measure, keeping his distance and mindful of every punch thrown his way in the final minute.

As his punches failed to find the mark, Ito ultimately failed to leave the ring with the title still in tow.

His record falls to 25-2-1 (13KOs), ending his reign just 10 months after soundly outpointing Christopher Diaz a few miles away at Kissimmee Civic Center.

Herring improves to 20-2 (10KOs) with the win, his fourth straight since dropping down from lightweight and signing with Top Rank.

The move also came with his joining McIntyre’s B&B Boxing stable which of course includes the very best boxer in the world who served as a fourth trainer for Herring’s training camp.

“Words can’t explain how happy I am for him,” stated Terence ‘Bud’ Crawford of his teammate’s title win.

“We talked time and time again. I told him to just go out there, have fun and enjoy the moment.”

What the new titlist most enjoyed, perhaps, was upsetting the odds.

“Let’s be honest, everyone had Ito winning this fight before we even entered the ring,” Herring stated, coming in as a near 2-1 underdog but with many already calling for a unification bout between Ito and Miguel Berchelt, who was seated ringside.

“Everyone counted me out.”

No matter what happens moving forward, nobody can ever again count out Herring—or take away what he was able to achieve on a weekend that for 10 years has held such a special place in his heart.