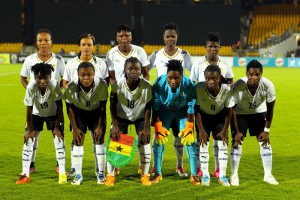 The captain of Ghana’s senior national women’s football team, the Black Queens, has  fired back at the team’s coach, stressing that “We don’t engage in lesbianism acts.

“It has never happened in our camp”

Elizabeth Addo, who has been nominated for the CAF African Women’s Player of the Year, explains that “This perception is borne out of how female footballers dress and walk but trust me, I have not seen any Ghanaian footballer who is a lesbian.”

The team’s head coach, Yusif Basigi, recently claimed that was the case, warning that the act is ruining the women’s game, without providing a hint or a shred of evidence.

The Black Queens fell short of expectation and just ended their campaign at the women’s continental championship hosted by Cameroun, with a bronze medal as consolation prize.

Nigeria, previous eight-time winners, triumphed 1-0 over the hosts, Cameroun, to tally a historic nine-time conquest of the women’s edition of the African Cup of Nations championship.
Ghana is the host of the next edition scheduled for 2018.
EDITED FROM: ghanasoccernet.com