Fabiano Caruana has won two elite tournaments in a fortnight, jumped to No 2 in the live ratings only 21 points behind the world champion, Magnus Carlsen, and starts play in the US championship in St Louis on Wednesday.

America’s world title challenger is already putting psychological pressure on Carlsen, seven months before their 12-game world title series. While capturing the Grenke Classic at Baden-Baden, Caruana won his final two games with the unfavourable black pieces, and, just as in the candidates at Berlin, went for the full point in the last round when a draw would have ensured first prize.

The 25-year-old downsized his result, saying he had played better in Berlin but “the work and the form I was in carried over here, I kept getting chances and I took them.” He could have lost twice, once a fleeting opportunity missed by Carlsen and the other when the No 1 woman, Hou Yifan, overlooked a study-like endgame win. Carlsen was also unbeaten but the Norwegian escaped against the German tailender Georg Meier who could have sacrificed both rooks for a brilliant mate which he missed in time pressure. 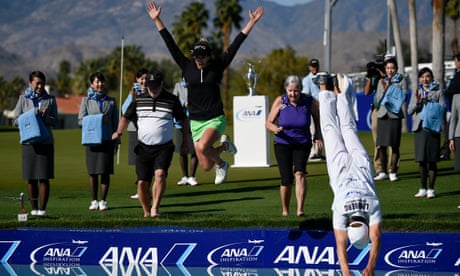 While Caruana begins St Louis on Wednesday, Carlsen will start on Thursday at Shamkir, Azerbaijan, where his rivals include three of the candidates who Caruana outpaced in Berlin, plus Anish Giri who tied with the world champion at Wijk aan Zee.

Then Caruana and Carlsen will be at the super-strong Altibox Norway event in May and June. Later still Carlsen will be at Biel, Switzerland, in July, while in September Caruana will lead the US team in the 150-nation Olympiad as they bid to repeat their gold medals of 2016.

For both, this is an intense competitive programme compared with past world championships where the players would often prepare with their aides for weeks or months. It foreshadows a tight and close contest in November which is likely to go the distance. Since title matches were reduced to the best of 12 games, nearly half of them have been settled by speed tie-breaks.

Right now, Carlsen and Caruana are evenly matched and in their 20s with many career years ahead, so there is the prospect of one of the great chess rivalries developing, like Alexander Alekhine v José Raúl Capablanca in the 1920s and 1930s, Mikhail Botvinnik v Vassily Smyslov in the 1950s, and Anatoly Karpov v Garry Kasparov in the 1980s.

Caruana broke another taboo in the final round at Grenke when he unleashed a startling opening novelty rather than hoard it until November. After 1 e4 e5 2 Nf3 Nf6 3 d4 Nxe4 4 dxe5 d5 5 Nbd2 Qd7!? has the immediate idea that if White continues 6 Nxe4 and swaps queens Black can retake with the knight on d7 rather than with king or bishop on d8. More subtly, the queen move prefaced a light square strategy for Black’s army.