The Spain international has struggled to force his way into Antonio Conte’s side, meaning a move away from Stamford Bridgeis likely.

According to Tuttosport, AC Milan are eyeing a move for the 29-year-old as Serie A giants are in the process of being taken over by Chinese investors.

It’s believed the new wealthy owners would fund the move for the former Barcelona man as they are eyeing him as a potential replacement for Riccardo Montolivo, who suffered a serious knee injury.

It has also been reported CEO Marco Fassone and director of sport Massimiliano Mirabelli travelled to London to discuss Fabregas’ future. 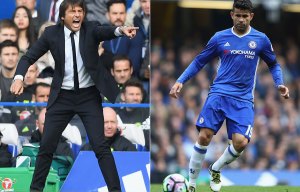 Diego Costa, Eden Hazard and Victor Moses all score for Chelsea but who was awarded Star Man?

Chelsea 3 Leicester 0: Costa, Hazard and Moses fire Blues to victory in the ‘battle of the champions’

But AC Milan boss Vincenzo Montella has attempted to squash the rumours linking his club with the Chelsea midfielder.

He said: “We’re looking for a player who has the characteristics that Montolivo has, who can also operate in a defensive-midfield two.

“Fabregas? He doesn’t have those characteristics.”