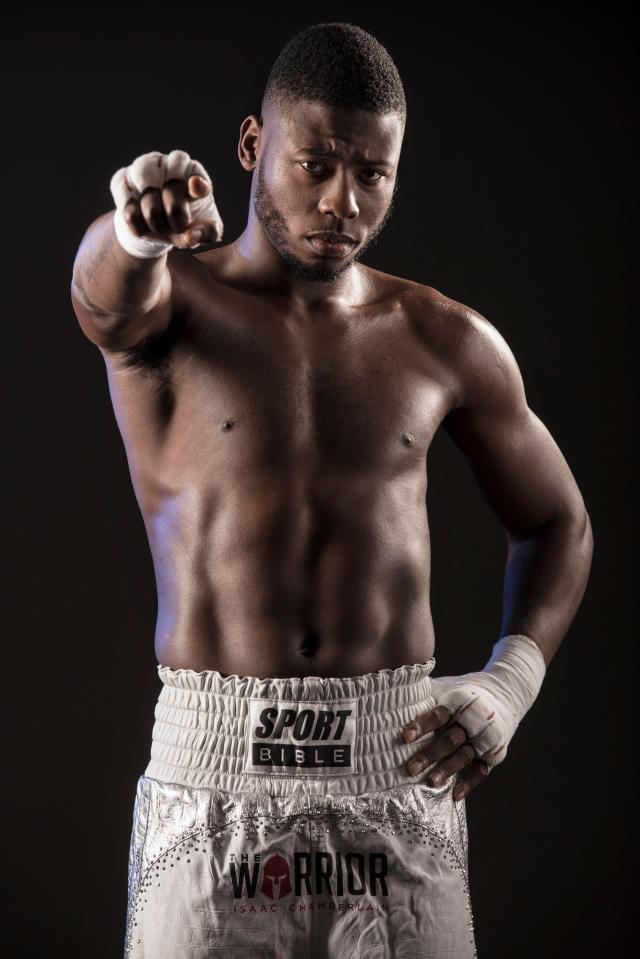 ISAAC CHAMBERLAIN vs Lawrence Okolie is being billed with an air of menace: A London turf war which will leave the loser with a mountain to climb to rebuild their shattered career.

But the narrative should be based around the inspirational success both young fighters have achieved against brutal adversity, certainly in Brixton-based Chamberlain’s case.

Growing up, the 23-year-old was not hungry for boxing glory – he was just plain starving, wolfing down syrup sandwiches, without – as he puts it – a pot to p**s in.

The inescapable hyperbole that is boxing‘s lifeblood means his February 3 fight with Hackney’s Okolie – a once obese and bullied child and McDonalds worker – is sold as ‘British Beef’.

The truth is it’s an inspiring story as two British fighters of Congolese and Nigerian descent boldly put their unbeaten records on the line when most their age would be padding them out.

And the gruelling weight cuts, the 6am runs – and even the threat of defeat – pose no fear for Chamberlain, whose childhood makes the demands of professional boxingsound like a jolly.

Without a shred of self-pity, he told SunSport: “I came from absolutely nothing, I never had a pot to p**s in.

“I never had a pound for mufti day at school, none of that, we used to have syrup and bread sandwiches.

“I used to walk three miles to gym, take me 45 minutes and I would have to ask someone to drop me back because I never had any money on my oyster card.

“I never ever thought it was hard, I got on with my business and stayed committed and that is what I feel I have over everyone. I am obsessed, I just want to keep getting better.

“My mum brought me to the gym because there was a lot of gang violence in the area and my cousin was stabbed just after his GCSEs and my mum did not want me on that route.

“She brought me here and I loved it, even the smell of the gym.

“People in the gym always say you can be a world champion, even if you are rubbish and I had never heard nice words like that from my mum or teachers when I was young so it was encouraging and felt nice.

“I used to come back to the gym just so I could hear those words of encouragement again and again.”

Now the encouragement comes thick and fast, as do the sparring invitations from some of the planet’s best boxers.

For this camp, Chamberlain went to the Ukraine to learn from pound-for-pound ace Vasyl Lomanchenko and cruiserweight king Oleksandr Usyk.

There are rounds with Deontay Wilder and Anthony Joshua already under his belt and when SunSport visits Miguel’s Gym under the Brixton train arches, he has done another ten after an eight-mile run.

But modest Chamberlain insists the hard yards and extra hours in his beloved Lambeth were essential as he was once the worst fighter in the South London gym.

He said: “In my first spar I ended up with a bloody nose and they still told me I could be a champion.

“There have always been guys – seriously good boxers – that have just come and gone and I have surpassed them.

“At one point I was the most s**t boxer in the gym. I was the worst.

“But you have to start somewhere and I wanted to learn.

“Home is where the heart is and I don’t need to be away from Brixton, I love it here because it represents humble beginnings.

“I am used to it, this is one of the best gyms in Europe for how people treat each other, it’s an old school gritty gym.

“A lot of gyms are all fancy now but this place is spit and sawdust, that’s how I like it because the ring is not a place for glamour or glitz.

“Obviously this fight is on Sky and it’s going to look nice but inside the ring it is still going to be bloody ugly, it’s glamourised grit.”

Most fighters grow up mimicking Muhammad Ali, but few emulate his appetite for social change and improvement.

But Chamberlain quotes the legend when explaining how – whether February 3 brings success or failure – he will remain dedicated to the sport and the area that helped carve him out of what looks like granite.

Quoting Ali, Chamberlain said: “’Service to others is the rent you pay for your room here’.

“So I will help anyone trying to come up and do right.

“I am one of the least egotistical people around, I am always helping my community.

“I am a patron of Streatham Youth and Community Trust, helping with the youth club and trying to keep them away from gangs.

“I feel like I owe it to them because the boxing gym saved me.

“Boxing got me here so it’s my duty to make sure other people can follow me and do the same.”

If only that fitted neatly on the big-fight poster or sold as well as fast food.