Bernardo Silva fears Manchester City drawing Juventus in the Champions League quarter-finals because of the threat of Cristiano Ronaldo.

Pep Guardiola’s team will discover on Friday whom they face and Silva hopes to avoid his international teammate. Ronaldo scored a 52nd career hat-trick as Juventus overturned a 2-0 deficit against Atlético Madrid to progress.

Asked about facing Ronaldo, Silva said: “I wouldn’t like it very much, to be honest. I know him, I know what he’s capable of and once again tonight he proved it.” 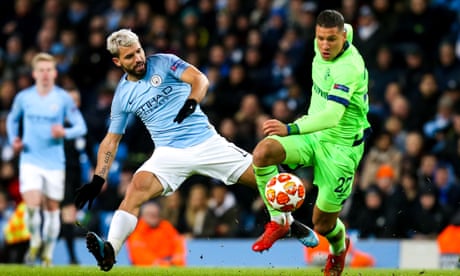 Silva is conscious, though, that City may have to face a proven Champions League force. “When you are playing in a competition like this you have to know that you can get drawn against these kind of teams, these kind of players,” the forward said. “It is a good thing. It means you are playing the best competitions, the best games and we will see who we are playing against. Of course to play against Cristiano and [Barcelona’s Lionel] Messi it is always complicated.”

Guardiola has described Silva as Portugal’s best player, apparently ranking him above Ronaldo. “I think people interpreted things a little different to what he meant,” Silva said. “Of course Cristiano, what he has done in over the last 15 years in football is probably one of the best players ever in the history of football, so no comparison to him.”

Asked whether Ronaldo had mentioned this to him Silva said: “No, not yet.”

City beat Schalke 7-0 at the Etihad Stadium to win the tie 10-2 on aggregate. Silva believes it is too soon to talk up City’s chances but said: “We have big ambition to do as well as possible in this competition because we know we have a good team.”

Silva has signed a three-year contract extension to 2025, having joined from Monaco in summer 2017 for £42m. He said: “As soon as I heard City wanted me to stay longer, my mind was made up. I love the club, the manager, players and the fans.”