A former senior executive at world boxing’s embattled governing body who was ousted in a bitter power struggle has claimed its president was intimately involved in securing a controversial loan from Azerbaijan.

The new claims about the genesis of the deal come amid wider concern over the organisation’s finances and the details of a looming 100-year commercial deal with a Chinese firm.

Aiba, the world governing body for amateur boxing and a recipient of millions of pounds in International Olympic Committee funds, negotiated the controversial Azeri loan in 2009. It was alleged by the BBC in 2011 that the deal was linked to a promise to favour Azerbaijani boxers at the London 2012 Games. Aiba has consistently denied there was any link and said earlier this year, after the Guardian revealed fears over a corruption crisis at the Rio Olympics that later led to all 36 judges being suspended pending a continuing investigation, that the loan was in the process of being repaid. Last week the governing body said it was still in discussions with the Azerbaijani investor. 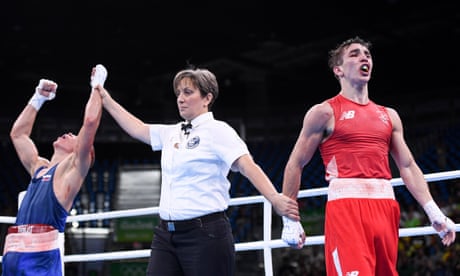 Since then a confidential PriceWaterhouseCoopers report compiled in 2015 and seen by the Guardian has revealed a host of financial issues at Aiba related to the loan, including irregularities so serious that the auditor recommended a criminal lawyer be retained by the governing body.

Amid a hail of claim and counter claim, Aiba has said the former executive director Ho Kim was solely responsible for the operations of World Series Boxing – an ambitious attempt to establish a new global tournament between competing franchises – in America and that he “found the Azeri investor and enjoyed wide discretion in the negotiations and implementation of the transaction”.

It is believed that Aiba plans to take legal action against Kim in Switzerland, where its headquarters are based, but it is as yet unclear on what grounds. But Kim, who denies any wrongdoing, has now told the Guardian that Dr CK Wu, the controversial president of the amateur world governing body, who is also an IOC executive board member, was intimately involved in signing the deal.

“A long story to be short, yes, [the] president went to Baku for the final negotiation to sign the investment agreement. After this visit the agreement was signed with the Azeri company based in Switzerland,” Ho Kim said. “However, later Azerbaijan could not do this way and changed the agreement by investing directly from Azerbaijan – we had to sign the agreement again. Yes, [the] president was involved [in] all negotiations and progresses from the start to the end of this deal.”

Documents seen by the Guardian, including a letter from Dr Wu to the Azerbaijani minister of emergency situations, Kamaladdin Heydarov, in August 2010 appear to back up the claim that the president was closely involved in negotiating the loan. In the letter, in which Dr Wu appears to mention meeting the minister (who is also head of the Azerbaijan boxing federation) in Baku the previous month, he asks Heydarov to finalise the payment as soon as he can.

The details of the letter also appear to raise questions over the conclusions of Aiba’s own internal review, which concluded in December 2011 that the loan came from a private sector investor, about the extent of the government’s involvement. In a statement to the Guardian Aiba again insisted it was Kim who was chiefly responsible for negotiating the loan and for how it was spent. “We confirm that Ho Kim found the investor and enjoyed wide discretion in the negotiation and in the implementation of the transaction. Significantly Mr Kim signed alone the first Memorandum of Understanding that eventually led to the loan,” said a spokesman. 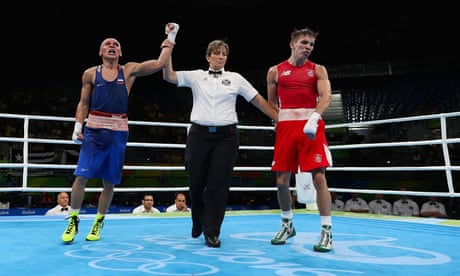 Kim denied that he was responsible for any accounting irregularities.

Kim, who alleges that Dr Wu was personally involved in the loan and employed a consultant to act as his “eyes and ears” in America, was acrimoniously ousted in 2015 to be replaced as executive director by Karim Bouzidi. The Guardian can reveal that Bouzidi has now also left the governing body after his role was “reassigned” in the summer at the height of the controversy over claims of judging corruption. Bouzidi has not yet commented publicly about his position.

Kim also spoke in detail about a $10m loan he and Dr Wu solicited from a Kazakhstani investor and a Chinese investor, Di Wu, who discussed lending 35m Swiss francs ($34.9m) and is said to have eventually invested around half that amount.

Aiba’s critics believe the rush to conclude a wide-ranging, 100-year commercial deal with AliSports, a division of the Chinese giant AliBaba, is partly due to the urgency in repaying the various loans and part of an attempt by Dr Wu to entrench his powerbase before a special congress he has called next month. Aiba denies the proceeds from the Chinese deal will be used to repay the Azerbaijan loan.

Wu’s current term as president runs out in 2018. Some insiders believe he is looking for ways to extend that tenure, others that he will give the new Chinese investors greater influence. Some in the boxing world fear that the Chinese firm will be given unprecedented influence over the future of the sport.

In response to questions from the Guardian, Aiba insisted the deal – which it is understood will give AliSports a 67% stake in a new 100-year joint venture in return for an up-front investment of around 110m Swiss francs ($109m) – was purely a commercial one and had nothing to do with repaying outstanding loans.

“The two entities are close to reaching a final agreement. Details will be announced shortly,” a spokesman said. “This agreement has nothing to do with the repayment of the said loan you mention. It is a long-term partnership which will benefit our sport and its boxers. The Joint Venture with Alisports will focus essentially on the commercial and marketing rights of boxing. The governance of boxing remains under the attributes of Aiba.”

Negotiations over the Chinese deal are believed to be close to a conclusion and some Aiba executives and national boxing federations are currently in St Petersburg for the Youth World Boxing Championships.

In the wake of the scandal in Rio, when the Guardian’s warnings about fears of corruption among concerned senior Aiba insiders were followed by a global outcry during the Olympics and the suspension of all 36 officials afterwards – pending investigation – there were calls for more transparency and a comprehensive overhaul of Aiba’s governance. Those loyal to Dr Wu insist his recent actions – including an internal review into the judging claims – prove that he is serious about cleaning up the sport and that the Chinese deal is part of a plan to put it on an even keel financially. They claim that Ho Kim is a bitter ex-employee and that his account is therefore compromised.

However, Dr Wu’s long list of critics believe the opposite is true and that the power-hungry president is increasingly desperate to find a quick fix to the mounting financial and organisational problems by sealing the AliBaba deal before December’s special congress in order to cling on to power. Under Wu a series of increasingly ambitious schemes to expand Aiba’s influence – including WSB and the Boxing Marketing Arm – have combined with a push to allow professionals into the Olympics and the rejection of headguards to make its competitions more attractive. But well-placed insiders alleged they also coincided with financial and organisational chaos that left Aiba unable to function effectively.

An Aiba spokesman reiterated that it had commissioned the PWC report itself to try to get to the bottom of where the Azerbaijan loan had gone and planned to take further action. “We would like to underline that in the draft PWC report you mentioned and which was circulated illegally, much of the findings require further investigation,” he said. “This is why Aiba—who has taken the initial step of commissioning the report and is addressing the contents of the report in a serious manner—has requested an additional report to confirm the financial discrepancies found in the initial report.”