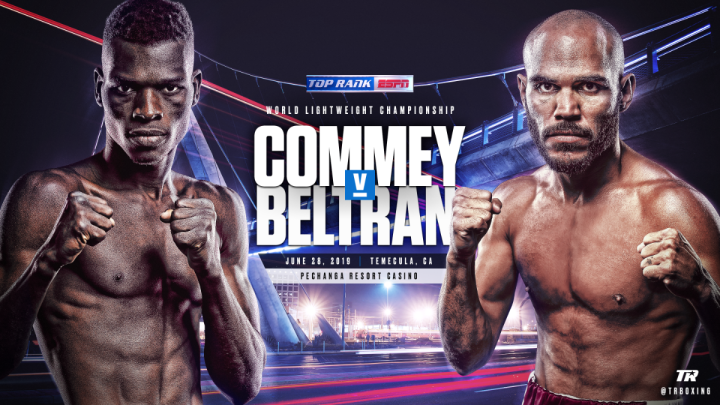 Something has to give. IBF lightweight world champion Richard Commey is one of the division’s biggest punchers. For his first title defence, he’ll face a rugged ex-champion who hasn’t been knocked out in more than a decade.

In the 10-round co-feature, undefeated Dominican puncher Carlos “Caballo Bronco” Adames will defend his NABO and NABF 154-pound belts against Patrick Day.

Commey-Beltran and Adames-Day will be televised live on ESPN and ESPN Deportes. The undercard will stream live on ESPN+.

“I’m honoured to be headlining an ESPN show as a world champion and to be fighting former world champion Ray Beltran, whom I have the utmost respect for,” Commey said.

“This is an opportunity for me to show the American public that I’m here to become the undisputed lightweight champion of the world. The path is set, and come June 28, I’ll be ready to rock ‘n’ roll.”

“I’m excited about this fight with Richard Commey. I’ve been the WBO champion, and I intend to be the IBF champion on June 28,” Beltran said.

“I expect a tough fight, but that’s the kind of fight I like.

“We are both very experienced, so it will come down to who is willing to lay his heart on the line that night.

“After losing my title to Jose Pedraza, I think some people thought I was done, but I always come back and prove that I belong.

“I’m excited to announce that Freddie Roach is back in my corner after all these years.

“When I was working with Manny Pacquiao, I saw what Freddie can do, both in camp and in the corner. I’m grateful to Top Rank and ESPN for having me back. The only thing I want for my birthday (July 23) is the IBF world title.”

“We’re thrilled that his first defence will be a high-profile fight against tenacious former world champion Ray Beltran.

“Richard wants to be a unified champion and a star. On June 28, he has an opportunity to raise his profile worldwide.”

He had previously challenged Robert Easter Jr. for that belt, dropping a razor-thin split decision in September 2016.

His only other loss came via split decision less than three months later to Denis Shafikov in Shafikov’s home country of Russia.

Since then, he has won four in a row and is fully recovered from a right knuckle injury suffered during the Chaniev fight.

His title reign was short-lived, as he was defeated by Jose Pedraza via unanimous decision last August.

Beltran rebounded from that setback, returning in February to knock out then-unbeaten 140-pound contender Hiroki Okada in the ninth round.

Adames (17-0, 14 KOs) has won three straight bouts by knockout since electing to campaign at 154 pounds.

A former amateur star from Santo Domingo, Dominican Republic, Adames grew up with 35 siblings and turned to the sport at the age of 12 after an older brother took him to a gym. In his last bout, April 20 on the Terence Crawford-Amir Khan undercard, he blew away perennial contender Frank Galarza in four rounds.

“This fight represents a big step in the right direction for me and my career,” Adames said.

“I am thrilled with this opportunity, and as I have always promised to my people of the Dominican Republic, I will be the next world champion from the island and the new face of Dominican boxing.”

“Time to show the world who Pat Day is,” Day said. “These are the fights I dreamed of on my way to top 10 contention. Now that I am here, I intend to advance to a world title. I respect what Carlos brings to the table, but he has never fought a guy like me. I am focused on winning and looking good doing it.”

The action-packed ESPN+ stream will include the following bouts:

Saul “Neno” Rodriguez (23-0-1, 17 KOs) will take on Miguel Angel “Miguelito” Gonzalez (24-4, 21 KOs) in a super featherweight bout scheduled for 10 rounds. Rodriguez has notched a pair of knockout wins since returning from a nearly two-year layoff.

Raymond Muratalla (7-0, 5 KOs) will look to extend his knockout streak to three against Javier Martinez (4-6, 3 KOs) in a lightweight fight scheduled for six rounds.

Super lightweight prospect Elvis Rodriguez (2-0, 2 KOs) will face an opponent to be named in a four-rounder.