Ghana’s Commey dropped Beltran twice in the first round, once in the fifth and once in the eighth before referee Eddie Hernandez Sr. stopped their scheduled 12-rounder in Temecula, California.

Hernandez didn’t like the way the 38-year-old Beltran reacted after he got up from that fourth knockdown. He stopped the bout 54 seconds into the eighth round.

“Beltran showed why he was a champion,” Commey said of the former WBO lightweight champ.

“He’s a great fighter, who showed it against me tonight. I was happy to get the job done.”

Ghana’s Commey improved to 29-2 and recorded his 26th knockout in the main event of an ESPN doubleheader from Pechanga Resort Casino. Phoenix’s Beltran (36-9-1, 22 KOs, 1 NC) lost by knockout for the third time in his 20-year pro career, but for the first time since September 2008.

“He caught me with a good shot in the [eighth] round, and the referee decided to stop the fight,” Beltran said.

“Now I’m gonna get together with my team and figure out what’s next. If I fight on, I will move up to 1.” 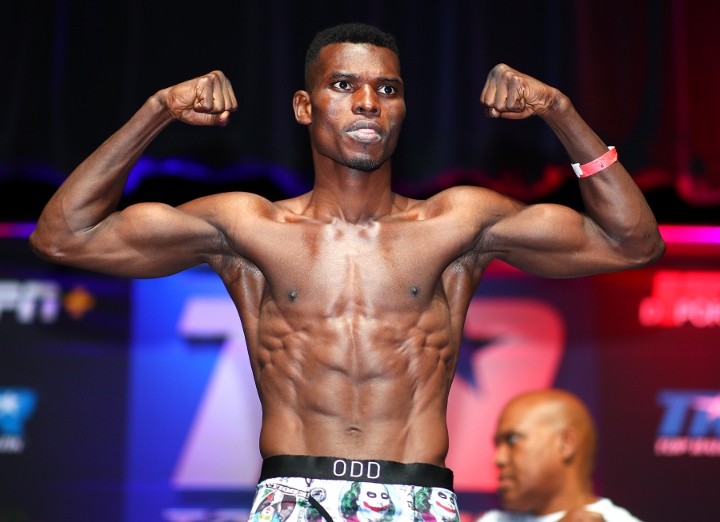 Beltran officially weighed in at 136½ pounds, a pound-and-a-half over the lightweight limit of 135. Commey came in at 134¼ pounds.

Commey’s victory Friday night is expected to lead him to a fight with emerging knockout artist Teofimo Lopez sometime in the fall.

Following a slow seventh round Friday night, Commey caught Beltran with a left hook that floored Beltran 43 seconds into the eighth round. Beltran landed flat on his back, but he got up from the fourth knockdown he suffered.

Beltran appeared ready to continue, but Hernandez didn’t like what he saw and stopped the fight.

Commey caught Beltran with a hard right hand to the side of his head just before the end of the sixth round, but it didn’t budge Beltran.

An accidental head-butt caused a break in the action for the second time in three rounds when there was 2:17 to go in the sixth.

Beltran went down for the third time in the fight at about the 2:15 mark of the fifth round. Beltran didn’t seem badly hurt by the left hook that sent him to his gloves and knees, but Commey staggered him again by connecting with another right hand with just over a minute to go in the fifth.

Commey tried to finish Beltran again, but Beltran fought out of that trouble and made it to the end of the fifth.

A right hand by Commey seemed to stun Beltran and knocked him backward with just under a minute to go in the fourth.

Beltran landed several body shots during the third round that kept Commey from coming forward. Commey also swung and missed wildly with right hands a couple times in the third round.

Following a drama-filled first round, Beltran and Commey were more cautious throughout a much more mundane second round.

A perfect overhand right by Commey dropped Beltran to the seat of his trunks just one minute and nine seconds into their fight. Commey swarmed a stunned Beltran as soon as he got up and scored another knockdown about 25 seconds later.

A right hand and left hook by Commey knocked Beltran into the ropes, which held him up and caused that second official knockdown. Commey attempted to finish off Beltran, but Beltran’s left hook with under a minute to go slowed down Commey.

Beltran and Commey traded hard power shots during an entertaining exchange toward the end of the opening round.