Richard Commey and his team spent enough time talking with his promoters—including his own—last week to know what his immediate future will and won’t include.

He’s also spent enough time in his career as a B-side to know that his next big move won’t come under similar conditions.

The reigning lightweight titlist is set to return to the ring in June, taking on a voluntary defense before eyeing a much bigger fight in the second half of the year.

“He held discussion with Lou DiBella and what I know is that I will more than likely defend my title sometime in June in a voluntary then hopefully something big after that.” 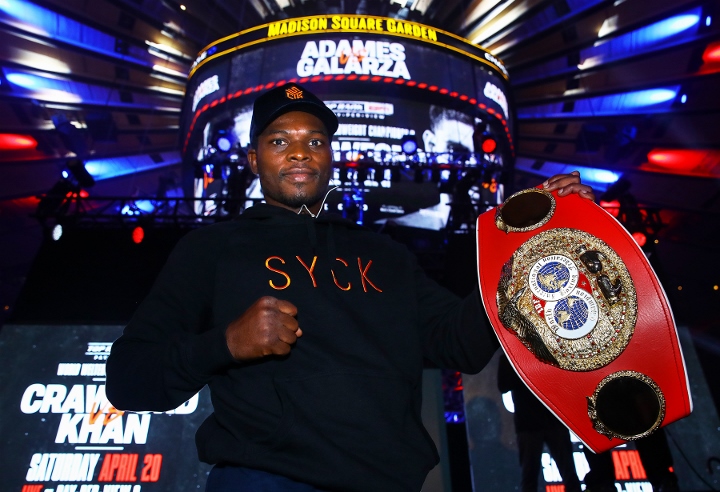 Ghana’s Commey (28-2, 25KOs) claimed his first major title in a 2nd round knockout win over Russia’s Isa Chaniev this past February. The bout took place on the undercard of an ESPN telecast promoted by Top Rank, his placement designed to drum up interest for a showdown with their star lightweight in Lomachenko.

Those plans were stalled when Commey injured a ligament in his right hand, which put him on the shelf before being cleared earlier this month to return to the gym. Meanwhile, Lomachenko was forced to proceed with a mandatory title defense, blasting out England’s Anthony Crolla earlier this month but suffering a knuckle injury of his own which will put him out of the ring until September.

Looking to resume his own career and also plan for the remainder of 2019, Commey and his team took in a night at the fights on Saturday. Their trek to Madison Square Garden came on the heels of his team holding court earlier in the week with Top Rank, whom presented present Saturday’s ESPN Pay-Per-View card headlined by Terence Crawford’s 6th round stoppage of Amir Khan.

Neither left a lasting impression on the defending lightweight titlist, who was hoping to scout future opponents.

“We went to the Crawford/Khan fight,” noted Commey. “There was a couple of lightweight fights on the bill, but I didn’t see anything to get me off my seat to be honest.”

A collision course with Lopez could be in his future, but one that—much like a discussed unification clash with Lomachenko—will come with Commey’s input rather than has been the case in the past.

Forced for years to fight on rival promoters’ shows and often in hostile territory, the newly minted titlist wants to serve notice that he’s more than just an opponent for hire.

“I have traveled all over the globe, fighting as the B-side in my quest to become world champion,” Commey points out, noting a 2½ year stretch that saw five tough fights all take place on the road.

Included among that timeframe were heartbreaking split decision losses to Robert Easter Jr. and Denis Shafikov in 2016.

“I fought American Robert Easter Jr. in the United States for the IBF world title,” Commey recalls of their Sept. ’16 thriller.

“I lost by split decision which still rankles me to this day as I believe I won that fight. The IBF gave me an opportunity to get right back in the mix by ordering me to face Russian Denis Shafikov.

“As usual, my then-promoters failed to arrange any sort of neutral territory. I had to travel to Russia and I lost by another split decision, which I felt I won more convincingly than the Easter fight. I worked my way back to another shot and my current promoter, Lou DiBella, got me a deal to fight on a Top Rank-ESPN show, fighting for the world title as the A-side.”

The 32-year old plans to keep it that way now that he’s finally fought his way to the top. A fight with Lomachenko remains very much on his to-do list—just not his only thing to do.

“I am the Global Ambassador for my manager’s Streetwise Foundation which aims to help the boxing fraternity in Ghana and give opportunities to young boxers who have dreams like me,” Commey reveals in pointing out what he fights for, well beyond the ring.

“As long as I am world champion, they know those dreams can come true.

“Therefore, I want to be 100% when I face Lomachenko and give Ghana a great victory in the spirit of the great Azumah Nelson. My goals extend beyond Lomachenko. The landscape in the lightweight division is changing. Will Mikey Garcia return? I am also eyeing the Robert Easter Jr.-Rances Barthelemy contest for the WBA lightweight regular title (on April 27). If Easter were to win, a unification bout in a rematch would be massive.”