Ronaldo ended France 98 with the Golden Ball — a trophy given to the best player at the tournament — but he and Brazil missed out on the main prize amid one of the strangest subplots in World Cup history.

Brazil were beaten 3-0 by hosts France in the final on Sunday July 12, 1998 in a match where the biggest incident occurred before it had even begun.

After scoring 34 goals in a fine season for Inter Milan — including one in a UEFA Cup final win over Lazio — and four more for Brazil en route to the world’s biggest game at the Stade de France, the stage was set for 21-year-old Ronaldo.

Indeed the show centred around him, but not in the way he would have wished, asSportsmail remembers 20 years on… 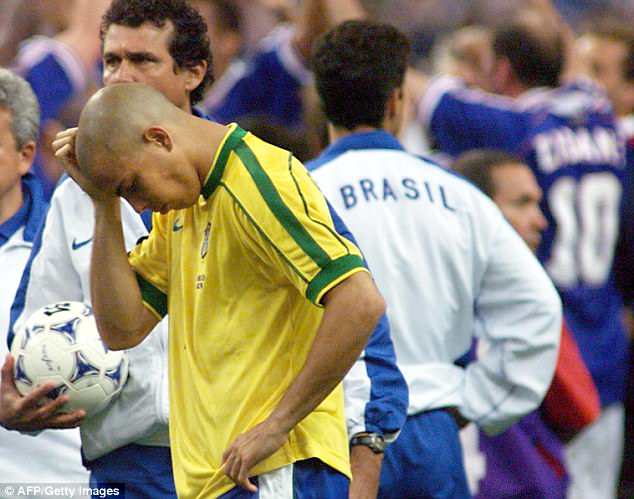 Two teamsheets and many more rumours

Fans, reporters and commentators — including BBC’s John Motson — were stunned 72 minutes before kick-off when news broke that Ronaldo had not been named as a starter for the final.

Ronaldo, widely regarded as the best striker on the planet at the time, had been left out at the expense of Fiorentina forward Edmundo.

Brazil’s players did not emerge for their pre-match warm-up and rumours were rife and wide ranging, with the strongest initially claiming that Ronaldo had an ankle injury… and then a stomach complaint.

Amid the madness, Motson sent BBC colleague Ray Stubbs to investigate and he sought information from Pele. After being greeted with a shrug by the Brazil legend in the press area, Stubbs returned to the gantry where Motson told the nation: ‘Even Pele doesn’t know what’s going on!’

Confusion increased when an updated team-sheet was distributed 30 minutes later showing that Ronaldo would indeed start the game, with Edmundo relegated to the bench.

Motson said: ‘I’ve never seen anything like this in my career. The scenes in the commentary box have been absolute mayhem and chaos.’ 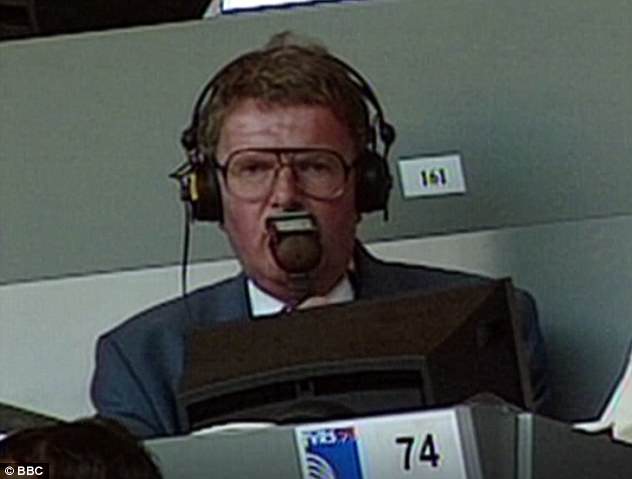 BBC commentator John Motson said live on air: ‘I’ve never had anything like this in my career’

Despite the concerns surrounding his fitness, Ronaldo played the full 90 minutes in the final.

He was spectacularly upstaged by a 26-year-old Zinedine Zidane, who scored twice in the first half.

France centre back Marcel Desailly was sent off midway through the second half, but Brazil were still unable to find a way through and Emmanuel Petit completed a 3-0 win in stoppage time.

Ronaldo’s biggest involvement in the game occurred when he collided with France goalkeeper Fabien Barthez.

After fighting back tears at full-time, Ronaldo later moped around the pitch with his Nike boots hanging from his neck, as well as a runners-up medal. 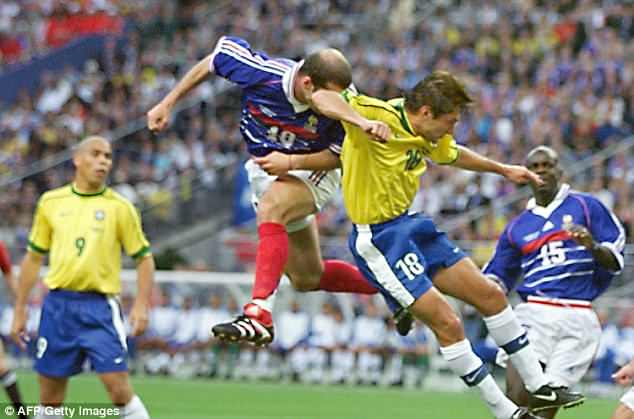 Zinedine Zidane, pictured winning a critical header, scored twice in the first half of the final 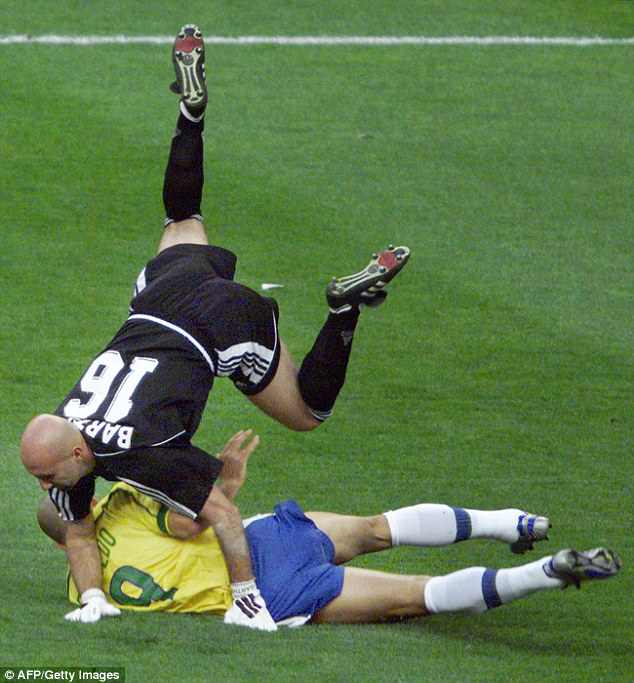 WHAT IS A CONVULSION?

A convulsion is a sudden, violent, irregular movement of the body, caused by involuntary contraction of muscles.

It is regularly associated with brain disorders — such as epilepsy — the presence of certain toxins or other agents in the blood, or fever in children.

Just hours before his shock omission from Brazil’s original teamsheet, Ronaldo decided to take a nap.

But his rest was disturbed by a worrying fit which caused his team-mates alarm.

Ronaldo told FourFourTwo his version of events: ‘I decided to get some rest after lunch and the last thing I remember was going to bed. After that, I had a convulsion. I was surrounded by players and the late Dr Lidio Toledo was there. They didn’t want to tell me what was going on.

‘I asked if they could leave and go talk somewhere else because I wanted to sleep. Then Leonardo asked me to go for a walk in the garden in the hotel where we were staying and explained the whole situation. I was told that I wouldn’t play in the World Cup final.’ 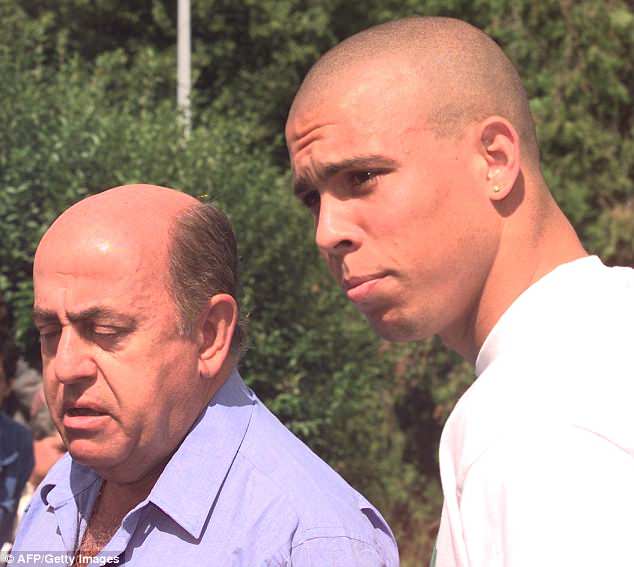 Ronaldo claimed he did not accept this decision and apparently told manager Mario Zagallo in no uncertain terms that he had to start.

‘All the essential medical examinations didn’t show anything was abnormal – it was like nothing had happened,’ Ronaldo explained. ‘After that we went to the stadium with a message from Zagallo saying that I wouldn’t play. I had test results in my hand — with Dr Toledo giving the green light. I approached Zagallo at the stadium and said: “I’m fine. I’m not feeling anything. Here are the test results, they’re fine. I want to play.”

‘I didn’t give him an alternative. He had no choice and accepted my decision. Then I played and maybe I affected the whole team because that convulsion was certainly something very scary. It’s not something you see every day.

‘In any case, I had a duty to my country and I didn’t want to miss it. I had my honour and felt that I could play. Obviously it wasn’t one of the best matches in my career, but I was there to fulfil my role.’ 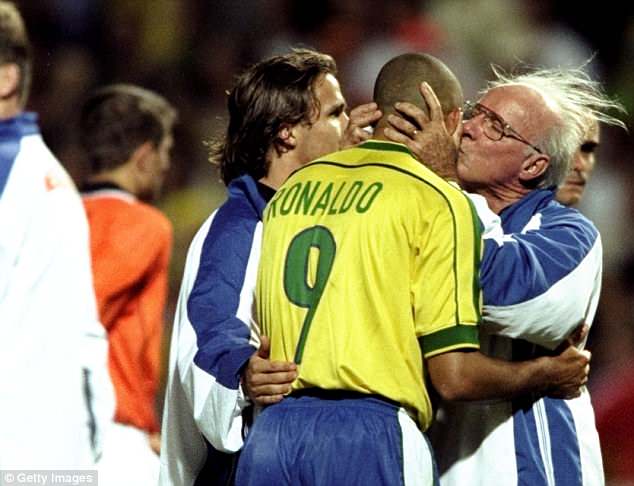 Ronaldo pictured with manager Mario Zagallo after Brazil’s semi-final win over Holland
Just do it! Nike accused of forcing him to play

Despite Ronaldo insisting that he told his manager he was fine to play, there have been suggestions of commercial meddling.

Edmundo hinted that Nike, who were partners with both Brazil and Ronaldo, influenced team selection.

‘Nike’s people were there 24 hours a day, as if they were members of the technical staff, said Edmundo. ‘It’s a huge power. That’s all I can say.’

Rumours that Nike had demanded Ronaldo’s involvement in the final despite him being ill refused to go away and, shortly after the turn of the century, a Brazilian parliamentary investigation took place to look into alleged corruption. 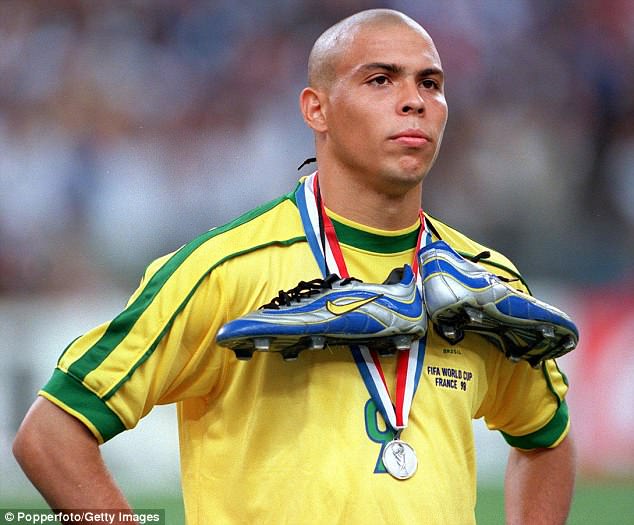 Nike sponsored both Brazil and Ronaldo, who wore his boots around his neck after the final

The investigation into the sportswear giant’s £270million sponsorship deal with the Brazilian national side failed to reach any telling conclusions.

Nike denied that their 10-year deal with Brazil, which had been signed in 1997, gave them a say in team tactics.

Ronaldo told the commission that he had felt healthy enough to play in the final, but refused to discuss terms of his contract with Nike as he said the information was confidential.

Ronaldo added that the only agreement he had with Nike was to ‘wear their brand of footwear’. 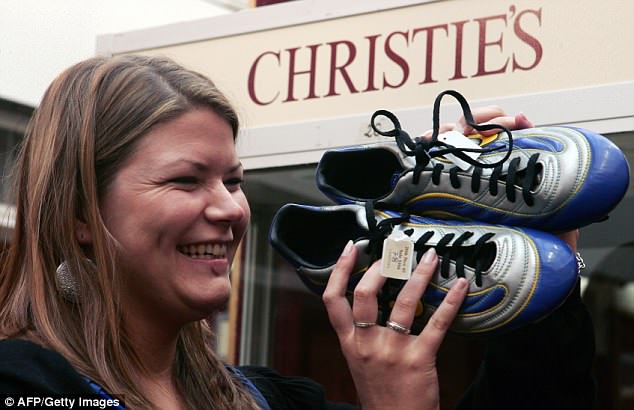 Conspiracy theories were rife, although — unlike the claims against Nike — most didn’t result in court dates.

Unsettled by an affair?

One flimsy rumour claimed that Ronaldo’s fits were caused by his then-girlfriend Susana Werner having an affair with Julio Cesar. 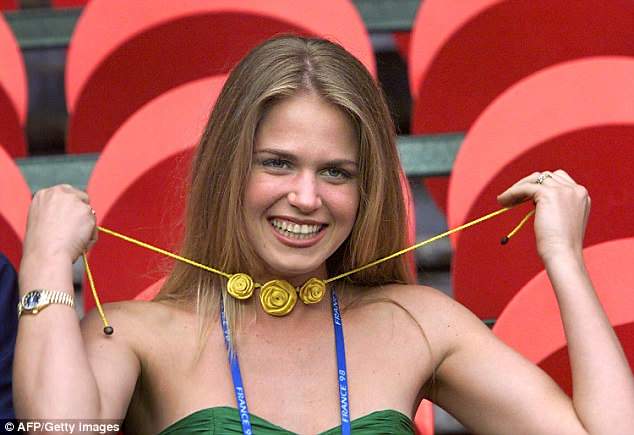 Susana Werner, who was Ronaldo’s girlfriend in 1998, pictured at the World Cup in France

A wild theory, said to have appeared in an email inbox at the Globo TV network, claimed that Brazil ‘sold’ the 1998 World Cup to France.

According to the tall tale, Brazil received $23m for allowing France to win the ’98 World Cup on home soil.

The hosts’ victory was said to please FIFA president Sepp Blatter as it helped the tournament to be seen as a successful vehicle for social improvements in France.

In return, Brazil were apparently promised that they would be given a kind draw at the 2002 finals and then be allowed to host a future World Cup, which they did in 2014. 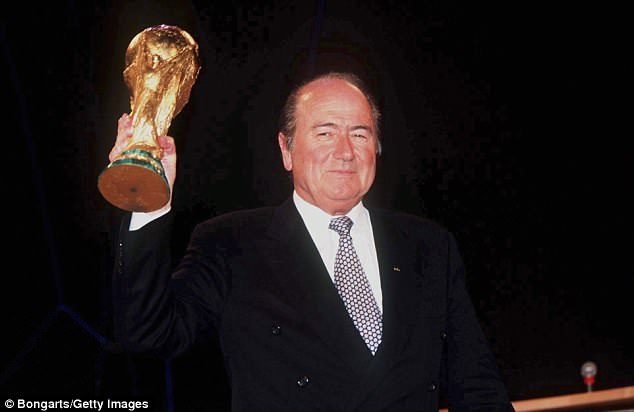 Sepp Blatter, seen holding the World Cup trophy in his right hand, was FIFA president in 1998

Perhaps Ronaldo’s fit in France was caused by the striker freaking out after having an allergic reaction following an injection into his knee? 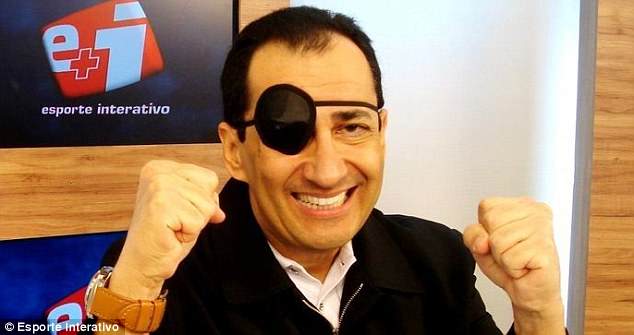 Perhaps unsurprisingly, French sabotage by drugging was alleged by multiple individuals — each one lacking any meaningful evidence, of course.

The supposed motive was clear though. This was was the biggest match in French football history — the country’s first ever World Cup final — and, as Brazil’s key man, Ronaldo was seen as a major obstacle to success for Les Bleus. 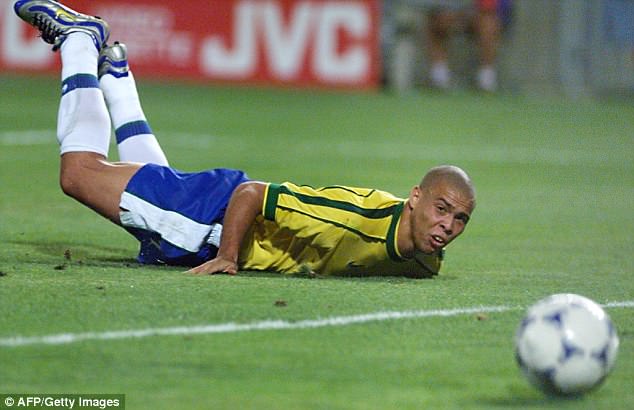 A lot was expected of Ronaldo. After all, he was the best striker on the planet. One theory is simply that the pressure got to him.

Newspaper Folha de S.Paulo claimed that Ronaldo had been showing signs of depression earlier in the tournament when he reportedly smashed a bike into a wall in a fit of rage.

The report cites Ronaldo as having a nervous crisis the day before the final when Brazil apparently decided against medicating him due to fears it could be a doping issue. 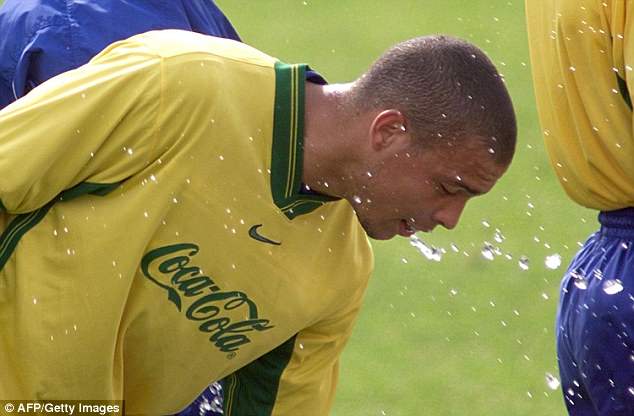 Folha de S.Paulo claimed that Ronaldo had been showing signs of depression at France ’98

Whatever the cause of Ronaldo’s final flop against France in 1998, he more than made up for it four years later.

Now 25, Ronaldo lit up the tournament in Japan and South Korea.

He claimed the Golden Boot with eight goals, two of which came in the final where Brazil beat Germany 2-0 in Yokohama.

Ronaldo’s form was even more impressive considering he had missed almost two full years of football between France ’98 and the 2002 World Cup due to serious knee problems.

Speaking after his brace in the final, he said: ‘I am very ambitious. I want to enjoy this and then really go for it.

‘I want to enjoy the full pleasure of our victory, but then turn to new things I hope to achieve in football.’

And sure enough later that summer he completed a big-money move to Real Madrid, before going on to win two La Liga titles with the Spanish giants. 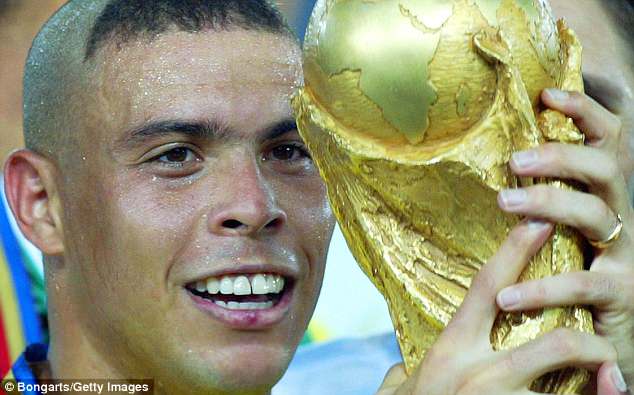 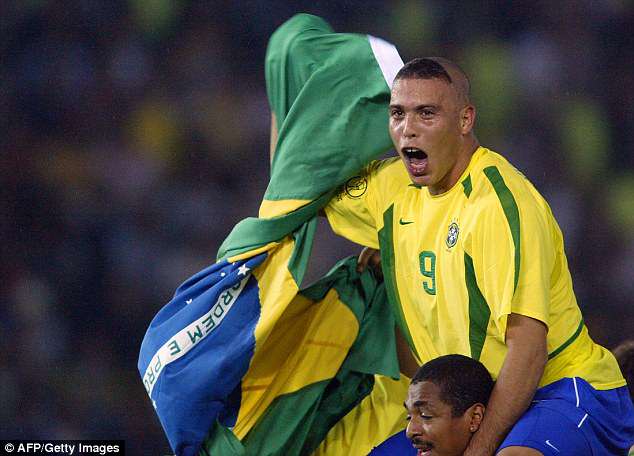 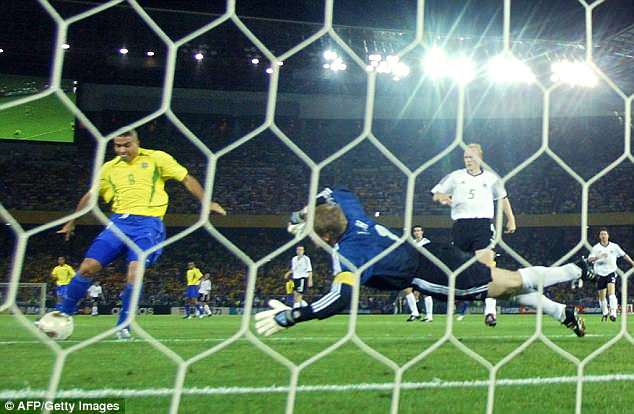