Conte & Kante: title in the bag

Early Friday afternoon at a sun-drenched Cobham and all is well in Antonio Conte’s world. That aberration endured at home to Crystal Palace was instantly exorcised by a resilient display in victory over Manchester City, a win to keep Tottenham Hotspur’s pursuit a distant seven points away. Talk of new contracts and player recruitment can wait until the title is claimed. The only issues to unsettle the Chelsea manager are a few lingering doubts over Victor Moses’s fitness and the spiky fall-out from a spat between rival coaching staff in the tunnel in midweek.

“When you are in this moment of the season and there are two great teams playing for the title, there are nerves,” said the Italian. “But there is always a winner and a loser and both must accept the final result and show respect.” That could be perceived as a little elbow in the ribs for Pep Guardiola or the City masseur, Mark Sertori, as much as Chelsea’s own fitness coach, Paolo Bertelli, all of whom apparently had some role to play in the post-match altercation. But, for all the claims, counterclaims and denials over what was said, Conte was not interested in elaborating. Squabbles in the tunnel are irrelevant, he suggested, when compared with “what happened on the pitch”.

It is hard to disagree given his team are still, in effect, running away with the title, even going into Saturday’s tricky trip to a revived Bournemouth. It is a measure of the success instigated by Conte over his first campaign in England that there is so little rancour threatening to disrupt progress, and this at a club who, rather too often, have made political infighting an art form.

Chelsea are functioning smoothly enough on the pitch and have been for more than six months. It is easy to point to the lack of a Premier League clean sheet since late January as evidence of defensive frailty but the eight games since Hull were shut out have still yielded 17 points. Such shortcomings are relative. The same might be said of Diego Costa’s slight dip in form at the other end of the pitch.

The Spain international has arguably been off his rampaging best since his own training-ground dispute with another member of Chelsea’s fitness staff, Julio Tous, in mid-January at a time when the leaders had become aware of interest in the forward from the Chinese Super League club Tianjin Quanjian. There have been three goals in 10 top-flight games this calendar year, a tally markedly inferior to the 14 in 18 games previously – as well as five assists – up to the end of December. Costa’s two previous campaigns have been feast or famine, prolific for five months and exasperated for as many. Yet a failure to score at the Vitality Stadium would see Costa go four Premier League games in a row without scoring for the first time since he arrived in England in the summer of 2014.

There have been flashes of on-field frustration, from that kick at Vincent Kompany on Wednesday to the anguished yelp, delivered to the heavens, after steering a free header wide of Wayne Hennessey’s far post in the defeat by Palace last Saturday. The striker is in one of those runs when luck has deserted him, a period when he can crunch a volley at goal from close-range only to see the ball bend back Scott Dann’s knee rather than billow the net. The Palace centre-half may not play again this season with his medial ligaments damaged. 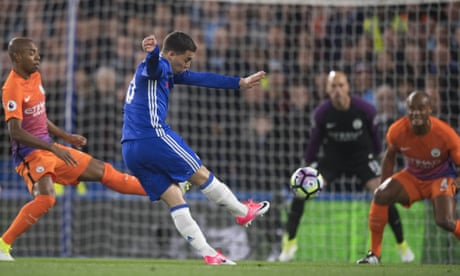 Costa has a tendency to seek out possession as a result and Conte – mimicking José Mourinho from the start of last season – has taken to bellowing regular reminders from the sidelines that the player should loiter more in the six-yard box where his presence still serves to unsettle opponents. “I’m not concerned about [the lack of goals],” said the Italian. “It can happen. For me the most important thing is he is showing great commitment and behaviour during the games and is doing what I want. He was also unlucky in a lot of circumstances. But a player like Diego Costa can score in any game.”

So what does he offer the team when goals are proving elusive? “His character. His personality. That’s very important for us and the team. Also, Diego won in the past and he has good experience. Goals are important for all forwards but he is important for us whether he is scoring or not.”

Costa – presumably encouraged by in-house television cameras ready to capture his fun – had hijacked one of the staff’s utility buggies, parked up on the fringe of the training pitch, on Thursday and taken it on a pre-session joyride, wrecking the coaches’ neatly arranged cones en route. A set of hurdles were also smashed to pieces, Costa’s antics prompting nervous laughter from his team-mates. Yet, if childish antics from a striker before training or coaching staff post-match in the tunnel represent the extent of Conte’s worries, then this title is in the bag.