Samuel Umtiti’s second-half header was the difference in a tightly-fought contest but one in which Belgium had the bulk of possession (64%) and France mainly looked to counter-attack. It proved an effective approach but one that has drawn criticism from Belgium’s goalkeeper Courtois as well as captain Eden Hazard. 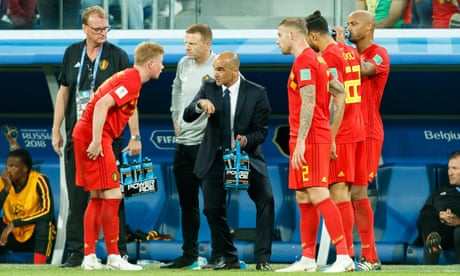 “France heads a corner and does nothing more than defend,” Courtois was quoted as saying by Sporza. “I would have preferred to have lost in the quarter-finals to Brazil, at least that was a team that wanted to play football. [France] are just an anti-football team.”

Quoted by Het Nieuwsblad, Hazard said: “I prefer to lose with this Belgiumthan win with this France. But they do defend strongly and are very efficient. We have not found their weak point. That little moment of magic needed to score was not there.”

Belgium created early chances but were stymied by France’s miserly defence and undone after Umtiti rose above Marouane Fellaini on 51 minutes to redirect Antoine Griezmann’s corner past Courtois.

France are now looking to win the World Cup for a second time while Belgium missed out on a chance to play in their first ever tournament final. Nevertheless, Hazard remains proud of his team’s achievements in Russia.

“We have seen a fantastic Belgian team and have been eliminated by a team that was more solid than us,” the Chelsea forward told Het Nieuwsblad. “We can be proud of what we have achieved. As a captain, I am happy to be part of this team.”