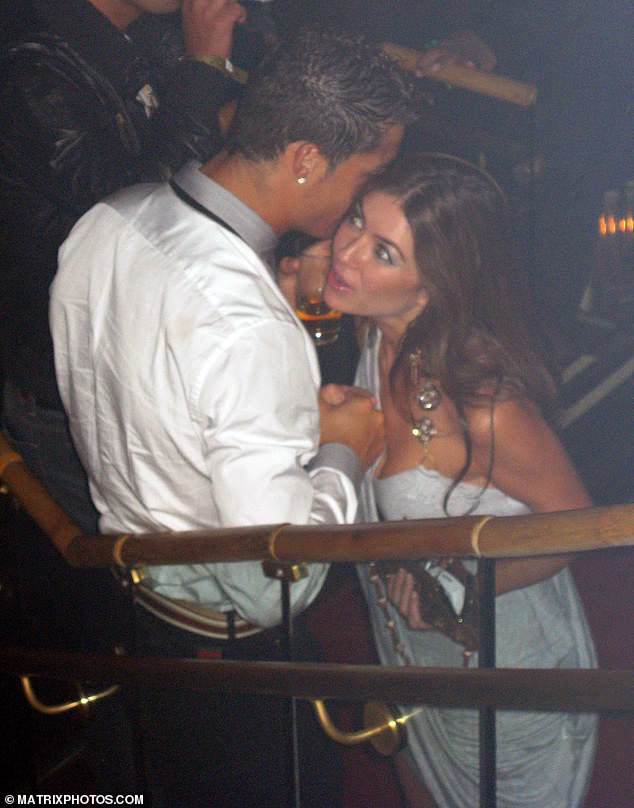 CRISTIANO Ronaldo apologised to a model minutes after raping her as she screamed: “No, no, no!”, bombshell court documents claim.

Kathryn Mayorga, 34, alleges the football superstar, 33, attacked her at a Las Vegas hotel in 2009. He denies it.

Kathryn in rosary blast at ‘attacker’

A COPY of a six-page letter written by Kathryn Mayorga to her alleged rapist ­Cristiano Ronaldo has been obtained by German magazine Der Spiegel.

Ms Mayorga insisted she was allowed to write it after he failed to show at the arbitration meeting where their legal teams thrashed out the settlement. It had to be read to him within two weeks of the 2010 deal.

An extract of the letter, which was prohibited from becoming public but is published by Der Spiegel, read: “I screamed NO NO NO NO NO NOOOO over and over I begged you to stop.

“You jumped on me from behind, with a white rosary on your neck!!

“What would God think of that!!!

“I don’t care about your money that was the last thing I wanted!!

“There really is ‘no justice’ in this case.”

Her lawyers claim in the court papers that Ronaldo’s team breached the agreed settlement by not reading the letter to him.

Der Spiegel reports that his lawyer Osório de Castro agreed to show it to him and he confirmed he had at the end of September 2010.

“What would God think of you!!!

“I hope you realize what you have done and learned from this terrible mistake!!

“Don’t take another woman’s life as you did mine!!

Ronaldo, 33, strongly denies the claims — calling them “fake news” — and says the sex was consensual.

He reportedly previously agreed to pay Ms Mayorga £287,000 to stop her pursuing criminal charges — ­which could have seen him jailed for life — ­­and gagged her from going public.

But her lawyers are now trying to overturn that settlement and she has spoken out for the first time.

Court documents lodged by her lawyers state: “Cristiano Ronaldo pulled the plaintiff into a bedroom and on to a bed and attempted to engage in sexual intercourse.”

It said the plaintiff refused, tried to cover herself and was screaming: “No, no, no”.

It adds: “When Cristiano Ronaldo completed the sexual assault, he allowed her to leave the bedroom stating he was sorry, he was usually a gentleman.”

The alleged rape is said to have happened in the early hours of June 13, 2009.

At the time of the alleged attack, Ronaldo, then 24, was in Las Vegas on holiday with his brother-in-law and cousin.

Budding model Ms Mayorga, then 25, was ­working in Rain nightclub, inside the Palms Casino Resort and met the star in the venue’s VIP area.

Paparazzi pictures showed the pair chatting, before he invited her and a friend to his penthouse suite — room 57306 at the Palms — “to enjoy the view of the Las Vegas Strip”.

The luxurious suite featured a Jacuzzi on the balcony.

Ms Mayorga claims she refused to get into the hot tub because she did not want to ruin her dress.

She said Ronaldo offered her some clothes to wear and told her to change in a bathroom.

The court papers claim that while she was changing, Ronaldo walked in, exposed himself, and asked her to perform a sex act.

In an interview with German magazine Der Spiegel, Ms Mayorga said: “This guy that is so famous and so hot . . . he’s a frickin’ loser and a creep.”

She said she refused to engage in the sex act, but kissed him after he promised he would let her go.

She recalled: “He starts to come on to me very strong.

“And he starts to do stuff to me and touch me and grab me. I pushed him away and kept saying, ‘No’.”

She stated that, a short time later, Ronaldo pulled her into a bedroom and raped her while she cried: “No, no, no”.

After the alleged attack, she claimed Ronaldo said he was a “good guy”” except for the “one per cent”.

She told Der Spiegel: “After he assaulted me, he wouldn’t let me leave. And he was calling me, ‘Baby, baby’.

“He gave me this look, this guilty look. Almost like he felt bad.

Ms Mayorga said that she angrily asked Ronaldo if he had Aids.

“And he’s like, ‘No, no. I’m a professional athlete and I get tested every three months. I couldn’t play my game with a disease.’ ”

Ms Mayorga went to the Las Vegas Police Department later that day and was examined in hospital.

Evidence of the alleged rape was documented and photographed.

As part of that deal, she agreed never to go public with her allegations. But she is now trying to overturn the settlement.

She says she signed only because she was “terrified of retaliation” from Ronaldo and of “being publicly humiliated”, court papers claim.

She told Der Spiegel she was now coming forward after seeing sex abuse victims tell their stories as part of the #MeToo movement.

Her lawyers have accused Ronaldo and his team of a “criminal conspiracy” to obstruct the investigation into the alleged crime and are suing for damages which could run into millions.

Ms Mayorga is even claiming in legal papers that he had a “confidential source” within the Las Vegas Police Department.

The court documents — filed by Mayorga’s lawyers at Clark County District Court, in Nevada — also claim the footballer hired a team of “fixers” to follow her around and dig up dirt on her.

And, according to the document Ronaldo admitted to his legal team she said “stop” during the alleged rape.

They claim the Euro 2016 winner confirmed “she said ‘No’ and ‘Stop’ several times”.

Der Spiegel also claimed Ronaldo wired Ms Mayorga £287,000 from a company, based in the tax haven of the British Virgin Islands, that held his advertising and sponsorship revenue.

The magazine alleged that “as such, it appears that Ronaldo paid for the Las Vegas case using sponsor money”.

He told Der Spiegel: “These serial sex offenders appear to me to be enabled by . . . a team of lawyers and others who go out and use these agreements to suppress prosecutions, and it enables these people to continue to engage in sexual assaults.”

Mr Stovall said he had filed the civil complaint to declare the non-disclosure agreement against his client void.

They will also be seeking damages against Ronaldo.

Mr Stovall told Der Spiegel: “The purpose of this lawsuit is to hold Cristiano Ronaldo responsible within a civil court of law for the injuries he has caused Kathryn Mayorga and the consequences of those injuries.”

Ms Mayorga, who has just quit her job as a teacher, has gone into hiding.

She explained: “I’ve had like these serious breakdowns. And again, blaming of the rape.

“And I blame him, and I blame myself for signing that thing.”

Lawyers for Ronaldo have threatened to sue Der Spiegel over the “blatantly illegal” claims.

The Juventus star also hit back at the slurs himself, telling his followers during an Instagram live video: “No, no, no, no, no. What they said today? Fake, fake news.

“They want to promote (themselves by using) my name. It’s normal. They want to be famous to say my name, but it is part of the job. I am a happy man and all good.”

The player’s lawyer Christian Schertz said in a statement last night that the Der Spiegel report was “an inadmissible reporting of suspicions in the area of privacy”.

Ronaldo’s lawyer Schertz said he would seek compensation from Der Spiegel for “moral damages in an amount corresponding to the gravity of the infringement”.

He said it was “probably one of the most serious violations of personal rights in recent years”.

Las Vegas Police Department has spoken to Ms Mayorga several times in recent weeks – sparking claims that they may re-open the rape investigation.

Sexual assault does not fall under the US statute of limitations in Nevada — which means it can be investigated despite occurring nine years ago.

Both Ms Mayorga and Mr Stovall did not respond to requests for comment by The Sun.

Lawyers for Ronaldo also failed to respond to a request for comment.

Multi-millionaire Ronaldo is one of the biggest names in world sport and regarded as one of the greatest footballers of all time.

He has been named world player of the year five times and transferred to Juventus from Real Madrid this summer for £99milllion.

The Italian club and the Las Vegas Police Department yesterday also declined to comment on the latest revelations.

From the foregoing, at the very least, Ronaldo could be in deep trouble, short of another negotiated settlement, which may yet be breached, in future. Not looking good for Ronaldo.