‘How dull it is to pause, to make an end, to rust unburnish’d, not to shine in use!” Cristiano Ronaldo has been accused of many things across his impossibly gilded career, some more serious than others.

Still, his sheer unbending will remains a remarkable source of strength in his late years. Like Ulysses in the poem, returning home to Ithaca from his glorious travels, there is an element of epic glamour about Ronaldo’s presence as Portugal’s captain in Porto for the Nations League final on Sunday night. 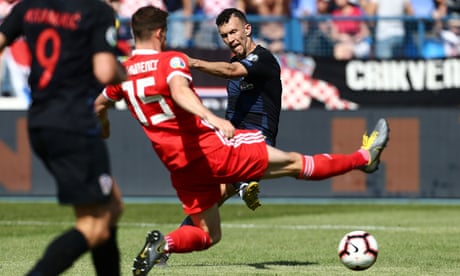 Ronaldo refuses to pause or make an end of anything.

His career has basically been an exercise in refusing to go away, in paring back and refining his own irresistible gifts to a fine point, in never letting anything drop.

The Nations League may feel like a lukewarm, managed competition for those on the outside. But you can bet nobody will be taking the final as seriously as Ronaldo.

In part because of that voracious trophy-hoovering hunger. But also because all things have an end point. Ronaldo will be 35 years old by the time the next major final comes around for club or country.

His longevity is astonishing. But it is also deceptive, just as the time is always a little later than you think.

Whisper it, but tonight could easily turn out to be the last time football’s great compound digital eye gets to see Ronaldo play in a major final.

One thing is certain, though. He will be ready. And as ever he will have something to prove.

There is a cyclical element to this homecoming. When Ronaldo leads his team out to face the Netherlands at the Estádio do Dragão it will be just short of 15 years since he followed Fernando Couto out at the Estádio da Luz, 200 miles down the coast from Porto, for the final of Euro 2004.

Ronaldo ended up weeping cinematically on the pitch that day. He has been relentless in seeking a personal catharsis.

Fifteen years on, all 26 of the other players in that final have retired. The only member of the wider Portugal squad still also going is the reserve goalkeeper José Moreira, currently playing, aged 37, for Cova da Piedade in the Portuguese second division.

Ronaldo, meanwhile is still front and centre, still smarting at not getting his sixth Ballon d’Or, still quietly furious at being denied another Champions League, with Juventus. What is it with this guy?

Plus, there is the added element of home. We have become so used to the Ronaldo brand, that immaculately gelled iconography of cheekbones and muscular perfection, the movements that seem to come from some personalised high-end choreography.

Still, he is also fiercely cherished in Portugal, unchallenged as his country’s most celebrated professional athlete, its richest entertainer, its most famous person, as they say in America, period.

This week, the Portuguese newspaper Diário de Notícias carried an article suggesting this Nations League is worth €150m (£130m) to the Portuguese economy – but only if Ronaldo plays. Without Ronaldo, the brands hang back, the TV interest wanes, even ticket sales would fall.

Sportspeople are often referred to as brands and influencers, often without much basis beyond their own hopeful publicity.

Ronaldo, as ever, has the numbers to back it up. This is a one-man economic driver. Albeit one entering its legacy phase

There is a further significance in the hunt for a second international title.

Ronaldo’s club feats are already written in letters of hyperbolic fire. But in international football, he has been arguably the most effective single presence in the last five years.

Since Germany won the World Cup in 2014, Ronaldo has scored 36 goals in 39 games for Portugal. He has captained them to victory in the Euros and could be about to win this inaugural off-year competition.

If it is to be his final final, it will be a final of consequence, not least for the Ronaldo legend. But then the first rule of writing off Ronaldo is never write off Ronaldo. This is a player of rare completeness. No attacker has ever defined so successfully exactly how he is going to play and win. Whatever you say he is, that is what he is not. Ronaldo has succeeded completely in every task he has set his own talent.

From the tricky winger of Sporting Lisbon, to the glorious inside forward of Manchester United, to the complete central striker of Real Madrid, to the restrained, goal-hungry version of his late years at the same club. Right now we are in fifth-wave Ronaldo: the imperial goal-hammer years.

It works, too. Ronaldo’s movement has dropped but the returns are still there. In the recent hat-trick game against Switzerland there was even a sense of Ronaldo digging deep in his playbook and finding some of his old standards, most obviously in one vintage retro-dribble past Kevin Mbabu on the touchline.

Perhaps there is even an element of calculation here. Ronaldo will be up against Virgil Van Dijk on Sunday night. Van Dijk has already shown against Harry Kane that he will win most attempts to wrestle or play at close quarters.

Running, dribbling, attacking at unusual angles: these will be useful tools. Ronaldo still has it in him. How he attempts to play Van Dijk will be fascinating.

That duel has been a key strand in the buildup. Not that anyone knows what Ronaldo really thinks about any of this. He remains behind the veil, communicating only with Uefa in gobbets of football-speak inanity, confined by pressure of all sorts.

Beyond that opaque public face, Ronaldo has always been distant.

It is a remarkable feat of obscurity in itself, another statement of his personal power.

Ronaldo can do things such as attempting to claim half of the tiny dressing room at Iceland’s Laugardalsvöllur stadium solely for himself before kick-off in a European qualifier, but still retain at all times the total respect of his teammates.

This is a fine Portugal team, too. Neves-Carvalho-Silva is a midfield to go deep into any tournament. João Félix offers vast attacking promise.

Still though the focus, the sense of drive and destiny will come from the man at the front, an icon of the age who continues even now to strive, to seek, to find and not to yield.