Croatia v England: where it could be won or lost

The big decision Zlatko Dalic has to make lies in midfield. Does he play Luka Modric and Ivan Rakitic deep with Andrej Kramaric in front of them (Fig 1), or does he do what he did against Argentina and Denmark and bring in a more orthodox holding midfielder? 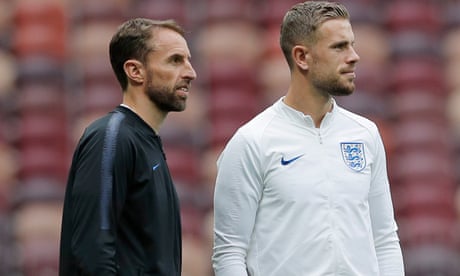 The former has the advantage of offering more direct support for Mario Mandzukic so there is somebody to pick up the second ball when he wins knockdowns or to capitalise when he pulls wide and crosses, as Kramaric didagainst Russia. Modric and Rakitic can then try to control possession and the tempo from deep in midfield. The danger for Croatia is that Modric ends up too deep, unable to exert the sort of influence he did against Argentina, too tied up with trying to stifle Dele Alli to hurt England.

The other option is to bring in Marcelo Brozovic (Fig 2), or perhaps Milan Badelj. That liberates Modric and Rakitic – although Rakitic spent much of that Argentina game tracking Lionel Messi – and poses a problem for England by placing two men in Jordan Henderson’s zone.

That would mean Alli having to drop off, assuming England maintain the same triangle in midfield rather than bringing in Eric Dier to play alongside Henderson, or, perhaps, England could rely on one of the back three to step up to offer support at the back of midfield. That would still leave them with two men against a lone centre-forward, which would have the advantage of Alli and Jesse Lingard overmanning in transition against a single holding midfielder. 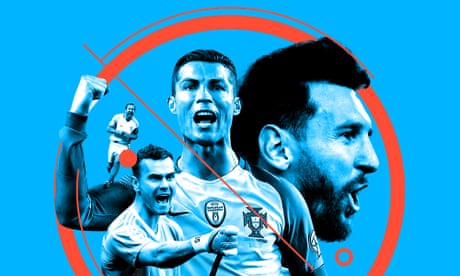 Croatia have a clear bias to their left, with 44% of their attacks coming down that flank as opposed to 33% on the right, with them playing far more through Ivan Perisic than Ante Rebic. England have been far more balanced but this will inevitably have an impact, forcing Kieran Trippier, who has arguably been the best right wing-back/full-back in the tournament, to do more defending.

That said, England do have the advantage of Kyle Walker, who plays at full-back for his club, playing on the right of the three central defenders, so if Trippier is caught upfield, he should be comfortable covering. And there is the possibility of using a Croatian strength against them; if Trippier drives past Perisic, Ivan Strinic can be left isolated. (Fig 3)

The situation is reminiscent of what happened when the sides met in Zagreb in September 2008 – there Rakitic was the attacking left-sided Croatian who left his full-back Danijel Pranjic exposed, leading to Theo Walcott’s only international hat-trick and a 4-1 England win.

England have scored five of their 11 goals from set plays and two penalties have resulted from fouls on Harry Kane conceded in the mêlée England’s corner routine produces. The focus on corners has been Gareth Southgate’s indisputable triumph, a recognition of a way a national manager can make a tangible difference in the relatively short time available to him.

A line of four players at the edge of the box, one of whom stands still as the ball is delivered while the others scatter, rather like a queue in a Tesco Metro suddenly realising additional checkouts are about to be opened. Not only does the static player plus his marker serve as a barrier to help create channels for Kane and Harry Maguire but the flurry of movement seems to provoke opponents into making panicky grabs at English shirts. 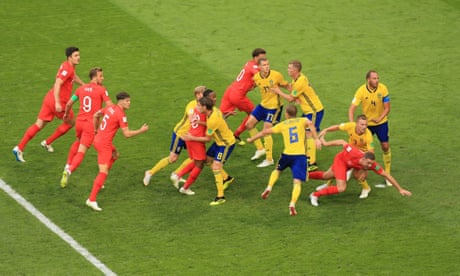 Queueing while pointing out foreigners committing infractions of etiquette, of course, has been an English strength for years; Southgate’s genius has been to weaponise it.

Croatia will study England’s movement and have enough beefy defenders that they should not be physically intimidated, but then the same could have been said of Sweden, against whom Southgate deployed a variant with two queues of three players. There will surely be further routines waiting to be unveiled and England will have observed how poorly Croatia conceded the late corner against Russia that brought Mário Fernandes’s equaliser.

Denmark, meanwhile, scored against them from a long throw into the box and Iceland’s Sverrir Ingi Ingason headed against the bar from a corner in the group stage.

England’s prowess from set plays can also have knock-on benefits if defenders become so anxious at the prospect of conceding a set play that it makes them, in open play, reluctant to concede corners. A moment’s hesitation, or an over-ambitious attempt to play out from the back could present England with opportunities.

Both England and Croatia needed penalties to progress from their last-16 ties, with Croatia then becoming only the second team in World Cup history to win multiple shootouts in the same tournament (either side in Croatia’s last-16 match would have matched the achievement of Argentina in 1990, as Russia had knocked Spain out via the same method in their previous game). Winning games on penalties, though, tends not to be a sign of long-term health. Excluding finals, there have been 28 penalty shootouts in World Cup history: only eight of the victors have gone on to win their next game within 120 minutes, and one of those was playing a side that had also progressed by means of penalties.

Modric has looked in danger of resurrecting a World Cup tradition of the most technically gifted players failing from the spot (Socrates, Michel Platini, Dragan Stojkovic, Diego Maradona, Chris Waddle …). He saw his kick saved in extra time against Denmark and his two penalties in shootouts have both been unconvincing. His effort against Denmark was nervous, straight down the middle and only just avoided the trailing foot of the goalkeeper Kasper Schmeichel, while against Russia Igor Akinfeev reached a shot that was nowhere near the corner but was able only to push it on to the post from where it cannoned in. He is not a taker to be relied upon. 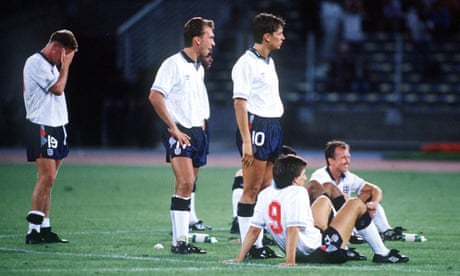 Amid all the euphoria, it is perhaps worth remembering that the only teams England have actually beaten in this World Cup are Tunisia, Panama and Sweden. Although England’s defence coped well against Radamel Falcao, they were undone by Yerry Mina from that late Colombia corner.

It is never wise to read too much into one moment in one game but, if that hinted at a vulnerability to an aerial threat at the back, it is one Croatia’s Mario Mandzukic is ideally suited to take advantage of. The 32-year-old Juventus forward has won 17 of the 30 aerial duels he has been involved in at this World Cup. Assuming he is fully fit – he limped through the final minutes of the quarter-final – he poses an aggressive and mobile threat.

Harry Maguire has won cult status for his laid-back attitude, his goal against Sweden and the size of his head; now is the time for the Leicester City man to back that up with some actual physical defending. The good news is that he has won 29 of 39 aerial duels and 65.4% of those he was involved in during the last Premier League season.