Daniel Jacobs: a believer to deliver? 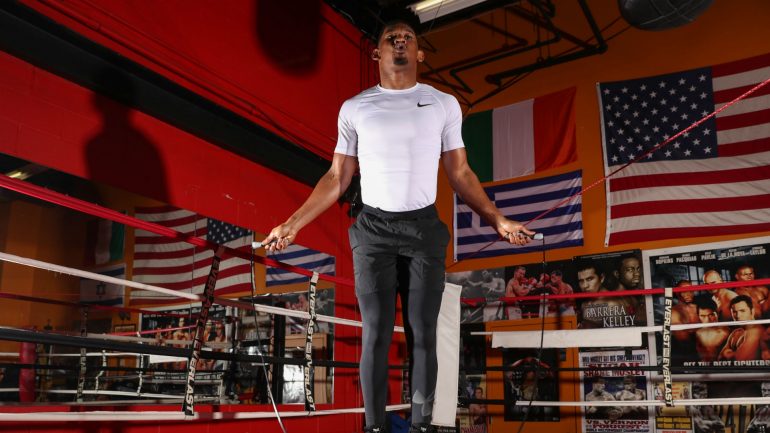 IBF middleweight champion Daniel Jacobs is one of the premier middleweights in the world.

Beyond winning an Olympic medal, Jacobs accomplished everything he wanted to do on the amateur circuit. So on Dec. 8, 2007, Jacobs made his professional debut on the Floyd Mayweather Jr.- Ricky Hatton undercard, disposing of Jose Jesus Hurtado in 29 seconds.

Jacobs parlayed that impressive showing to go 20-0 with 17 knockouts and earn a crack at Dmitry Pirog for the vacant WBO middleweight title in July 2010. Jacobs, on the cusp of becoming a superstar, was expected to dispatch his latest opponent. Pirog, however, had other plans, running through Jacobs to win the belt.

After battling cancer and not being able to compete from March 2011-October 2012, the “Miracle Man” reeled off five consecutive victories, all via stoppage, to earn a crack at WBA (regular) titlist Jarrod Fletcher in August 2014. Jacobs easily beat Fletcher by fifth-round TKO to win his first major world title.

Jacobs ran through his next four opponents before taking on his most significant obstacle to middleweight supremacy, Gennady Golovkin. The Kazakh monster dropped Jacobs in the fourth round, but Jacobs roared back to lose a narrow decision — with many in boxing saying he did more than enough to win. He has gone on to win three straight bouts, with the highlight of defeating Sergiy Derevyanchenko by split decision in October to win the IBF title. His next opportunity is to face Saul “Canelo” Alvarez for the WBA and WBC middleweight championships.

Boxers have to begin their career somewhere. For Jacobs, it took place on Dec. 8, 2007, against Jose Jesus Hurtado. Jacobs couldn’t have asked for a better start, stopping Hurtado in just 29 seconds via TKO.

Jacobs had been three years removed from beating cancer when he battled Jarrod Fletcher for the vacant WBA (regular) middleweight title on Aug. 9, 2014. He’d previously won all five of his fights inside the distance since returning in October 2012.

Jacobs capped off his remarkable comeback, putting on a dominant performance in which he dropped Fletcher in the opening round. He continued to pound Fletcher with continuous power shots throughout until the referee stopped it with two seconds remaining in the fifth round. It was Jacobs’ biggest win of his career and his first major world championship.

Making himself a household name

By the time Jacobs stepped inside the ring with Gennady Golovkin in March 2017, he was regarded as the second-best middleweight in the world. Regardless of the stature, boxing pundits felt Golovkin would continue his reign of terror and extend his KO streak to 24. Things were looking that way during the fourth round, when Golovkin used a four-punch combination to send Jacobs to the canvas.

Instead of staying on the ground and calling it a night, Jacobs made it back to his feet and fought brilliantly for the last eight rounds. He lost a close decision, though the consensus was that Jacobs should have gotten the nod over the heavy hitter from Kazakhstan. Jacobs earned respect and admiration from the boxing public and people around the world, not only for surviving a knockdown from perhaps the hardest puncher in the sport, but also making an improbable run and almost getting a victory against someone who was thought to be unbeatable.