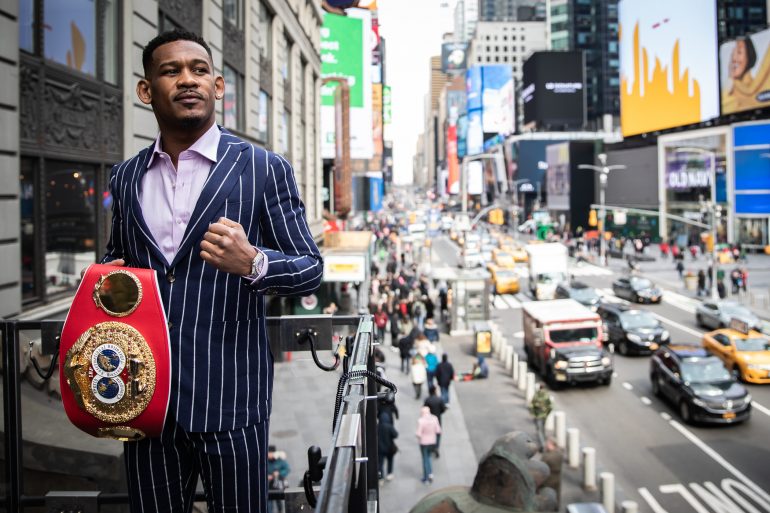 Daniel Jacobs waited patiently on the far side of the stage, awaiting his more celebrated opponent to arrive. As a Canelo Alvarez highlight reel played on the screen to start Wednesday’s press conference, Jacobs began bouncing on his toes. He’s been waiting for his moment for a true mega-fight, and now he has it.

“My hat’s off to Canelo for accepting this fight because I really didn’t think we were gonna get it,” Jacobs said, saying he’s used to being labelled as “high risk, low reward” when it comes time for big fights.

“As much as I pushed for it, in the back of my mind I’m always, this felt like some way it would fall through. Whether it was them lowballing me, whether it was a weight situation or whatever the case may be.”

But as the two men walked towards centre stage and shook hands and then stared down for cameras, it was clear that Jacobs’ worst fears hadn’t come true.

It didn’t hurt Jacobs’ chances that David Lemieux, another potential foe for Canelo’s first Cinco de Mayo weekend showdown since signing his big bucks DAZN deal, fell out of his fight against Tureano Johnson on the Alvarez-Rocky Fielding undercard when he was unable to make the middleweight limit, sending his future in the division into question.

The fight brings together the WBC and WBA belts held by Alvarez (51-1-2, 35 knockouts) plus the IBF title Jacobs (35-2, 29 KOs) won in his last fight against Sergiy Derevyanchenko, along with The Ring championship held by Alvarez.

As the two principals stood face-to-face, it was clear Jacobs, who has joked that he can still make 160 pounds because he skips leg day, was the larger appearing fighter. Alvarez, a former junior middleweight titleholder, faced a much larger opponent in December against the super middleweight Fielding, but Jacobs is no Rocky Fielding. 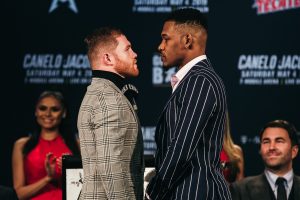 The mutual respect shown between the two fighters was in stark contrast with how last week’s press conference announcing another marquee DAZN matchup, Anthony Joshua vs. Jarrell Miller.

Jacobs and Alvarez shook hands in front of the crowd twice and offered each other praise for their abilities.

Where matters get contentious are when discussions about what happens if the fight goes all twelve rounds. Jacobs believes that Alvarez – who is the highest paid boxer in the sport – should have lost both fights against Golovkin in 2017 and 2018 instead of getting a draw and majority decision win (Jacobs believes he should have gotten the win in his own decision loss to Golovkin in 2017).

He has taken the approach of trying to “keep everybody accountable” in reference to judging and officiating, and said they shouldn’t be swayed by the crowd or “from any other source”.

“Sometimes when I’m sparring I might have guys glance my glove or block certain punches, we don’t want to give any looks whatsoever.

Jacobs’ promoter Eddie Hearn of Matchroom Boxing said it’s not something to “bang on about”, feeling it’s more important to drive home the significance of fair officiating on fight week.

“But it’s a funny game,” Hearn adds. “Sometimes when there’s been controversy, it can work in your favour with the judges.

Alvarez dismisses such criticisms as something that comes along with success.

“To me it sounds like excuses already, he’s making excuses of defeat,” said Alvarez, 28, through interpreter Robert Diaz.

“If that’s his mindset then that’s a mindset that favours me. Just come and do your thing. If he clearly beats me then everybody’s gonna see it.”

Even if the press conference was in Jacobs’ hometown, just a few train stops from his home borough of Brooklyn, the crowd in attendance at the Hard Rock Cafe was decidedly pro-Canelo, waving Mexican flags, honking horns and chanting. The crowd will be even more partisan when the press tour stops in Mexico City on March 1 and in Los Angeles on March 4, and on fight night at the T-Mobile Arena in Las Vegas on May 4. 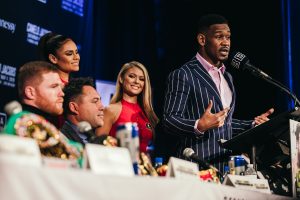 Jacobs just nodded along as the crowd made their presence known, adding it to the long list of obstacles he’ll deal with.

“That’s just how passionately I am about knowing I can be victorious in this fight. You have to go through different hurdles to reach greatness. I understand that, my back has already been against the wall to reach this level.

“Now that I have all these stipulations and contracts that I can’t do this and I can’t do that,” he added, referring to the rehydration clause that stipulates neither fighter can gain more than ten pounds by the morning of the fight. “Come on, add them on. I’m already used to this shit.”

Hearn is keen to call this a “50-50 fight”, but the odds were far longer of Jacobs even making it back to a major fight when he faced the potential of spending the rest of his life in a wheelchair after being diagnosed with the rare bone cancer osteosarcoma a few years back, or after his last fight in Vegas back in 2010, when he was unexpectedly knocked out by Dmitry Pirog in his first world title shot.

The day before the press conference, Jacobs made a visit to his old neighborhood of Brownsville, and happened to run into a number of people who were around early in his boxing career, when he turned pro with expectations of greatness after winning numerous amateur laurels.

“It’s just random how everybody just came together today in this place where it all started. It almost seems as if it’s meant to be,” said Jacobs, who views this as his opportunity to validate his long-held claims of being the world’s best middleweight fighter.