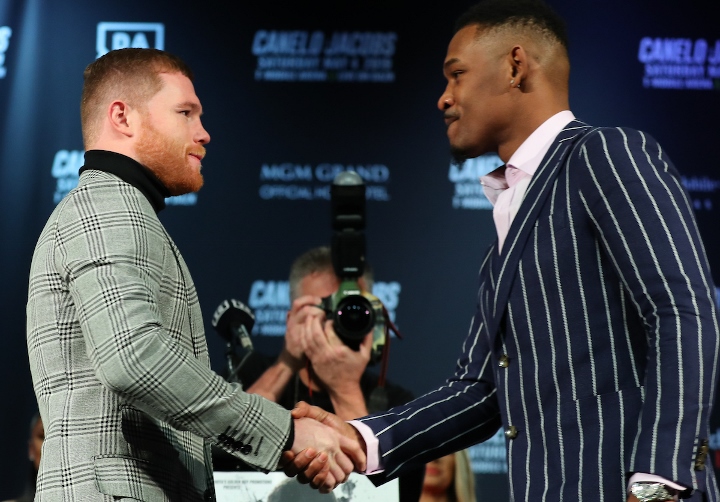 IBF middleweight world champion Daniel Jacobs believes his recent statements, explaining that Gennady Golovkin should have been the rightful victor in both bouts with Canelo Alvarez, have offended the Mexican superstar.

Jacobs will stake his belt against Canelo, who holds the WBC, WBA middleweight belts, on May 4th at the T-Mobile Arena in Las Vegas.

Canelo and Golovkin fought to a controversial twelve round split draw in 2017, and then Canelo won a close majority decision over Golovkin in their September 2018 rematch.

In a recent interview, Jacobs stated that Golovkin should have without question been awarded the first contest and also won the second but at worst had a draw in the rematch.

Jacobs lost a close decision to Golovkin in 2017. Jacobs felt that he did enough to win that fight – and Canelo agrees with him.

“He’s given me credit for beating Golovkin,” Jacobs said to the Los Angeles Times.

“For me not giving him the credit for beating Golovkin, I think that’s probably what the fuss is. I thought the first fight was Golovkin by unanimous decision, and the second was Golovkin by split decision, or a draw.”

Jacobs is just hoping the scoring of the fight with Canelo will be fair.

“Why is that an even a thing? If this is the sport of boxing, why are we even acknowledging that, ‘If you win the fight, but you don’t win decisively, you know you’re not going to get the nod?’” Jacobs asked.

“I hate that that exists … [but] we know through the history of Canelo’s career, it’s been an issue. Me bringing attention to it is not me complaining.”