On the eve of the Madrid derby Zinedine Zidane was asked to whom the game mattered more. “Both,” he said, but many wondered if the right answer was actually “Neither”. The word repeated most in the build-up to this match is “decaffeinated”. These city rivals have faced each other in three finals over the last five seasons – two European Cups, one Copa del Rey – and met in last year’s Champions League semi-final too. Both have also won La Liga and they have European quarter-finals of their own next week, so it is understandable that this time it feels as if something is missing – the league, for a start: with eight games to go that is Barcelona’s already, or so it seems. 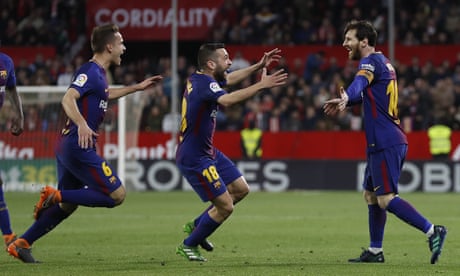 Without Messi, Barça looked beaten; with him, they look unbeatable

“It doesn’t matter where you are in the table, everyone wants to win,” insisted Atlético’s midfielder Koke. Atlético are second. Publicly at least, they have not yet surrendered the title. Nor, in fact, have Real Madrid although, as Koke’s comment suggested, they know it is beyond them now. After their 3-1 win against Leganes on Saturday night – courtesy of a Lionel Messi hat-trick – Barcelona hold a 12-point lead over Atlético, plus a head-to-head goal difference that in effect makes it 13. Their lead over Real Madrid is 13. The team that have equalled the La Liga record run of 38 games unbeaten and would have to lose at least four times in eight weeks.

The question, then, is when Barça win the league, not if – and it is a question that has occupied as this derby approached. If Real Madrid were to win, it has been noted, one thing, perhaps the only thing, they would achieve is to accelerate Barcelona’s coronation. More to the point they would make it more likely that Barça would win the title with a clásico victory, or the week before. Tradition, then, dictates that they would line up and applaud Barcelona at the Camp Nou, handing their rivals a guard of honour, but Zidane was having none of it. “We’re not going to do it, that’s it,” he said. The fact that he was asked about the possibility twice was telling, as if that is the most significant possible outcome.

For Atlético some distant hope of winning the league still represents something to hold on to and Diego Simeone has repeatedly insisted the aim is to win weekly and then “see where we are with five games to go”. The midfielder Thomas Partey said: “This game is more important to us because, if we win, we get closer to fighting for the league; we have to make sure we win.”

“It would be nice to win,” said Juanfran. “We would have a bigger gap to third place and then let’s see what Barcelona can do.” Both objectives go together, although the former is more realistic than the latter. “The opponent doesn’t matter. What matters is holding on to second place,” said Antoine Griezmann, although it is the opponent that makes doing so especially significant. Atlético have finished above Real only 18 times (in 86 leagues) and only once this century. “And our fans always want to finish above Madrid,” Koke said. 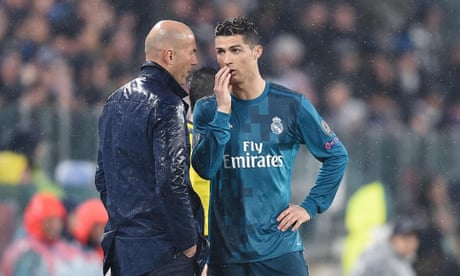 The last time Atlético were defeated in a league derby at the Bernabéu was before this contemporary era began, on 1 December 2012 when Simeone was making his managerial debut there and Iker Casillas was still Madrid’s captain. Since then Atlético’s run reads: 0-1, 1-2, 0-1, 1-1. They have won a Copa del Rey there, and a league at the Camp Nou, finishing above Madrid. Four times they have met in the Champions League, though, and Atlético have lost all four, twice in the final.

So, finishing above them may not feel as if it is everything, and still less with Atlético close to a Europa League semi-final and Real close to a Champions league semi-final, but it is something. The derby always is even when it is not – and for over a decade it really was not, Madrid’s fans even mocking up a classified ad that appealed for a “worthy rival for a decent derby”. But they kept turning up and tuning in, screaming their heads off in the stadium. This time, second place is in play and a glimmer of hope for first (for Atlético at least), which is more than ever was then, if less than has come to be the case.

There is also an opportunity for Gareth Bale, although the truth is that his presence underlines that this is not quite as big a game as it might have been, while Cristiano Ronaldo will play too, and Griezmann and Diego Costa, back to battle with Sergio Ramos again.

It is still Vikings against Indians, two contrasting identities, in which Atlético claim Madrid supporters could never understand and Madrid supporters do not want to try. “Proud of not being like you,” the banner read the last time they ever met at the Vicente Calderón. “We’ll put our heads and hearts into it,” said Juanfran. “No derby is ever decaffeinated,” insisted Koke.

Besides, try telling Py Laurence and François Hernández that it does not matter. Their son Lucas will be playing for Atlético; their other son Theo will be playing for Madrid. “That makes it much more special, although we don’t talk about the derby at home,” Theo said. “We wind each other up once in a while but he takes it well.”