Derevyanchenko finally gets date with Canelo

Saul ‘Canelo’ Alvarez insisted throughout the buildup to his middleweight title unification win over Daniel Jacobs that his 2019 campaign is geared towards collecting all of the belts.

That claim-and his patience—will be put to the test as the sanctioning bodies begin ordering mandatory title defenses, beginning with the title he just added to his collection.

Alvarez has been ordered to next defend his recently acquired International Boxing Federation (IBF) title—which he claimed in a 12-round win over Jacobs earlier this month in Las Vegas—versus mandatory challenger Sergiy Derevyanchenko. 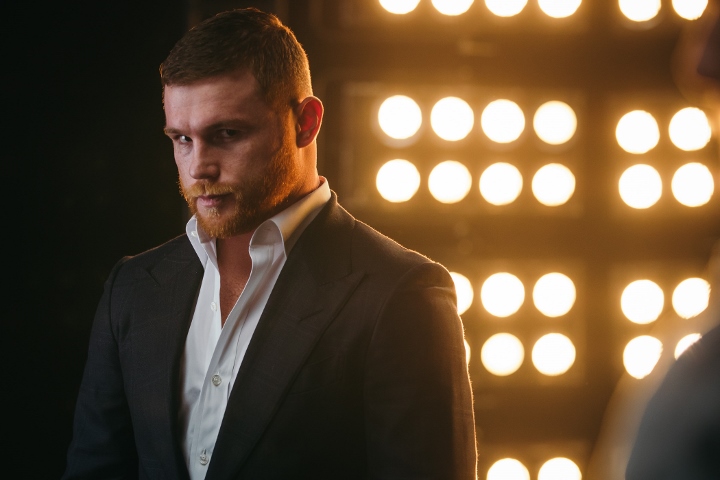 The sanctioning body formally called for the fight on Wednesday, notifying both parties via letter of which a copy has been obtained by BoxingScene.com.

The two sides will have 30 days—until June 14—to come to terms before the bout becomes subject to a purse bid hearing at IBF headquarters in Springfield, New Jersey.

The IBF allowed a rematch between Alvarez and Golovkin to take place last May on the condition that the winner face Derevyanchenko, whom had defeated Tureano Johnson in a final eliminator. Those plans were squashed once Alvarez tested positive for banned substance Clenbuterol which postponed their originally scheduled May 2017 rematch.

Golovkin requested an exemption given the unique circumstance, instead taking on faded and inactive Vanes Martirosyan whom he dusted inside of two rounds. The fight came with the IBF blessing on the condition that he honor his mandatory defense in his next bout.

To the surprise of nobody, Golovkin reneged on his promise as he instead went forward with the rescheduled rematch versus Alvarez last September. The title became vacant, which would be claimed by Jacobs in a 12-round split decision win over Derevyanchenko last October in New York City.

Derevyanchenko (13-1, 10KOs) has since resurfaced as the mandatory challenger, winning a dull 12-round decision over Jack Culcay in their title eliminator this past April.

The 33-year boxer from Ukraine—who now lives and trains in Brooklyn—could once again find himself fighting for a vacant title under nearly identical circumstances. Alvarez has yet to declare his next opponent, although the brass at DAZN—with whom he signed a 10-fight, $350 million contract last fall—strongly prefers a third fight with Golovkin.

Those plans are contingent upon Golovkin (37-1-1, 34KOs) surviving his own DAZN debut, as he faces unbeaten but unheralded Steve Rolls in an over-the-limit middleweight clash on June 8 in New York City.

Of course, Alvarez (52-1-2, 35KOs) has remained coy on the possibility of such a fight materializing. The lineal champion from Mexico insists his intentions are to become undisputed champion. The only loophole to escape a mandatory title fight would be for a sanctioning body to instead grant permission to participate in a unification bout.

The lone remaining divisional titlist is unbeaten WBO beltholder Demetrius Andrade, who will enjoy a homecoming title defense as he faces Maciej Sulecki on June 29 in Providence, Rhode Island.

Waiting out that fight is not an option as it pertains to the deadline Alvarez is up against in coming to terms with Derevyanchenko; a fight which does fall within that time frame is Golovkin-Rolls, which will leave Alvarez with a decision to make in the next 30 days.

There is limited history to his being dictated to by the sanctioning bodies, the last such occasion not ending well.

Alvarez claimed the WBC middleweight title in a 12-round win over Miguel Cotto in 2015. The bout came with Golovkin—already a unified titlist—as the mandatory challenger in waiting, although Alvarez was permitted an optional defense. That bout came in the form of his 6th round knockout of Amir Khan at a 155-pound catchweight, the same weight at which he faced Cotto and in his three prior starts.

The WBC followed through on its promise of ordering the fight, prompting Alvarez to vacate the title and denounce the sanctioning body immediately thereafter. Even after Alvarez agreed to terms for the first of two fights with Golovkin in Sept. 2017, he refused to pay sanctioning fees or acknowledge the WBC.

It became a moot point, as the fight ended in a controversial draw. The boxer and the sanctioning body resolved their differences ahead of his originally scheduled rematch, to the point of the WBC defending Alvarez in the wake of his pair of failed drug tests.

The next 30 days will determine if actions of the New Jersey-based IBF will trigger a similar response or if a more calming resolution can be reached.