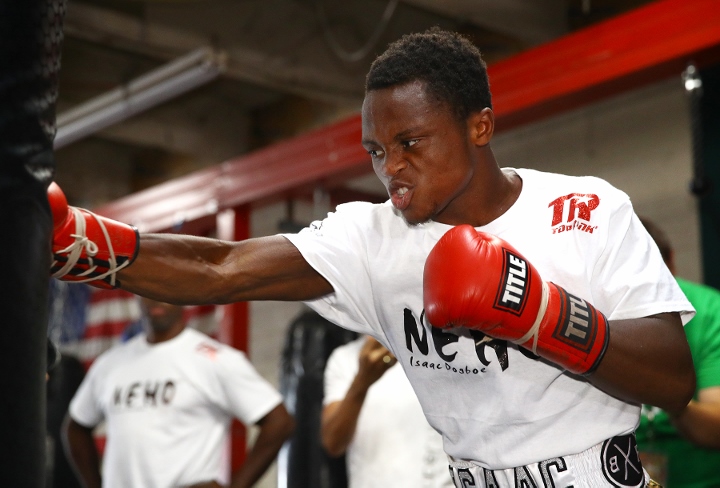 There will be two doses of ‘revenge or repeat’ on Saturday night, at the Tucson Arena in Arizona.

Isaac Dogboe (20-1, 14 KOs), who was on his way to big money fights, saw his path derailed on December 8th, when Emanuel Navarrete (26-1, 22 KOs beat him up over twelve rounds to capture the WBO super bantamweight title.

In the headline bout of the card, WBC super featherweight world champion Miguel “El Alacran” Berchelt (35-1, 31 KOs) will aim to retain his belt in a rematch with Francisco “El Bandido” Vargas (25-1-2, 18 KOs). Berchelt knocked out Vargas in eleven rounds to capture the title back in January 2017.

Dogboe took a lot of punishment in the first contest and blamed his performance on training issues, which he claims led to a lacklustre performance against a very big underdog.

Dogboe is planning to score a knockout victory to reclaim his belt.

While some observers believe Navarrete could be the one to score a knockout, Dogboe doubts the Mexican puncher is even capable of reaching that goal.

“Navarrete couldn’t knock me out when I was at my worst, and now I am at my best. I am a much more fit boxer this time around, and it is my mission to become world champion once again. The ‘Royal Storm’ is back,” Dogboe said.

“I have fought in Arizona before (first-round KO over Hidenori Otake in Glendale), and the fans there are tremendous. I know a lot of Mexican fans will be in attendance to see Navarrete, but I am coming for my title. He’s a nice guy and a great champion, but this is about redemption for me. I am ready to go to war.”

“I don’t see this as a distance fight. I am came coming for the knockout and to regain my title in spectacular fashion.”