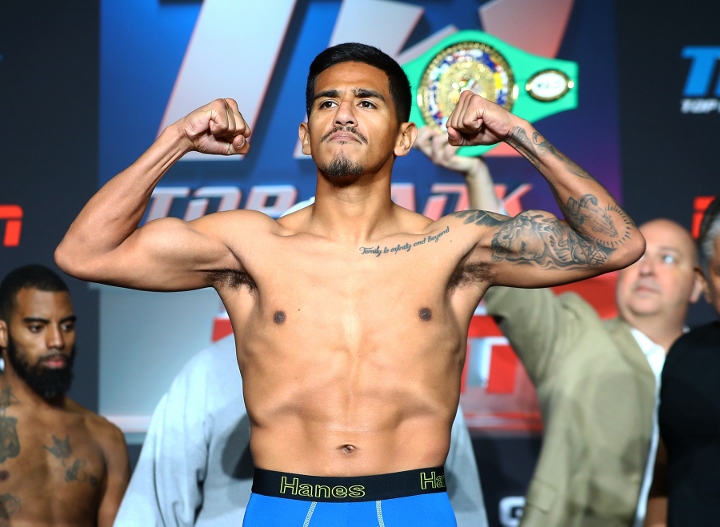 A battle of former 122-pound titlists desperately in need of a big win saw Jessie Magdaleno live to box another day after outpointing Rico Ramos in their featherweight bout.

Scores were 99-91, 98-92 and 97-93 in their slow-moving ESPN-televised co-feature attraction Saturday evening at The Hangar in Costa Mesa, California.

Ramos (30-5, 14KOs) missed weight by more than a full pound, looking drawn at the weigh-in and flat early. Magdeleno pressed the action early, wildly launching left hands and looping right hooks as Ramos was in early retreat mode. Action went from fast-paced to deliberate in a hurry, as Magdaleno attempted to work the body of his weight-drained foe.

The awkward pairing of southpaw versus conventional-stance boxer resulted in the first clash of heads late in round two. Magdaleno was the more affected of the two but never carrying the threat of the fight being stopped.

In retrospect, an injury-shortened contest would have been openly embraced, at least by viewers. Ramos’ disinterest in letting his hands go left room for Magdaleno to control the action as he pleased.

Unfortunately, the Las Vegas-bred southpaw wasn’t very much interested in engaging. Magdaleno settled for whatever openings were provided rather than looking to assert himself and make a statement in his first fight back since a title-losing knockout at the hands of Ghana’s Isaac Dogboe, last April.

Magdaleno provided a glimmer of hope for an action after scoring a straight left hand which buckled Ramos’ knees late in round five. It proved to be an isolated moment, as a boxing match quickly resumed at the start of the second half of the contest.

Ramos finally let his hands go in round seven, not landing anything of conviction but his rate of activity enough to force Magdaleno on the defensive for the first time in the fight. It didn’t quite take, as California’s Ramos went right back to throwing one punch at a time—if even that much—while Magdaleno reduced his own offense to hit and clinch.

The bell to sound the end of the 10th and final round signaled a night to largely forget for both boxers. At the very least for Magdaleno, it’s one for the win column, something he hasn’t experienced since April ’17, when he registered the lone successful defense of the 122-pound title he lifted in a disputed decision over Nonito Donaire in Nov. ’16.

Ramos snaps a six-fight win streak as he falls to 30-6 (14KOs). Win or lose, the 31-year old was essentially stuck in no-man’s land, as he never really made an impression at featherweight nor will he be able to compete in the 130-pound division.

It remains to be seen how well Magdaleno can fare as a featherweight. For now, he’s in a much better place than where he was a year ago.

The 10-round bout served as the chief support to heavyweight contender Kubrat Pulev’s U.S. debut versus Bogdan Dinu.