Legendary goalkeeper Iker Casillas has been discharged from hospital following a series of positives tests, as he looks to recover from a recent heart attack.

The 37-year-old suffered the medical emergency during training on the morning of Wednesday May 1, and was rushed to hospital where he was brought into a stable condition.

Upon leaving Porto hospital, Casillas told reporters: ‘I don’t know what my future holds but the most important thing is being here today. I’m feeling a lot better, I’ll be resting for a couple of weeks or even a couple of months.

WHAT HAPPENED TO IKER CASILLAS?

The 37-year-old former Real Madrid and Spain goalkeeper suffered what is medically known as ‘myocardial infarction’ – more colloquially referred to as a heart attack.

It occurs when blood flow slows or stops reaching a part of the heart, causing chest pains, shortness of breath and anxiety, among other symptoms.

The usual root cause of myocardial infarction is a blood clot, which stops regular flow around the body.

People who suffer heart attacks can return to work within weeks, but it usually takes months to recover. Casillas will not play again for Porto this season and may not be fit for the start of the 2019/20 campaign.

Complications after an attack can include an irregular heartbeat or damage to the muscles. If Casillas has suffered long term effects, he may not play football again.

‘It’s something that could happen in life at any point to any person and it happened to me and here we are. It’s difficult to talk right how but I’m very grateful because I have been very lucky.

‘The support I’ve had in these last few days has made me really loved and you have to find a smile at these moments in time. I think I’m going to find it because seeing so many people here today makes me feel very emotional.

‘I want to thank the hospital and the head of Porto’s medical services Doctor Nelson and the cardiologist Joao Carlos Silva and all the people in Porto who made sure I got to hospital quickly to reduce the effect of the heart attack I suffered.

‘I would also like to thank the thousands of people who showed their support on social media through videos and messages and in different spheres of football,’ he continued.

‘I feel a lot better now. I’ll be resting for a couple of weeks or even a couple of months. The truth is I don’t know how long it will be and I don’t care. The most important thing is being here today.

‘It’s been a few days but we had to wait till my heart settled down and my body and head settled down. I’m feeling emotional but I’m feeling good. I can talk about it as you can see. Many thanks once again for everything.’

The football legend was then pictured getting into his Range Rover alongside his partner, where he smiled at photographers from the passenger seat while Carbonero drove.

Later on Monday evening, Casillas posted a video message to Twitter in which he said the ordeal had left him ‘super emotional’.

Casillas was taken ill during a training session on May 1, though manager Sergio Conceicao later admitted the severity of the situation was not immediately realised.

Speaking at a press conference in the wake of the incident, the Porto boss said: ‘I must confess I didn’t think it was something serious at first. 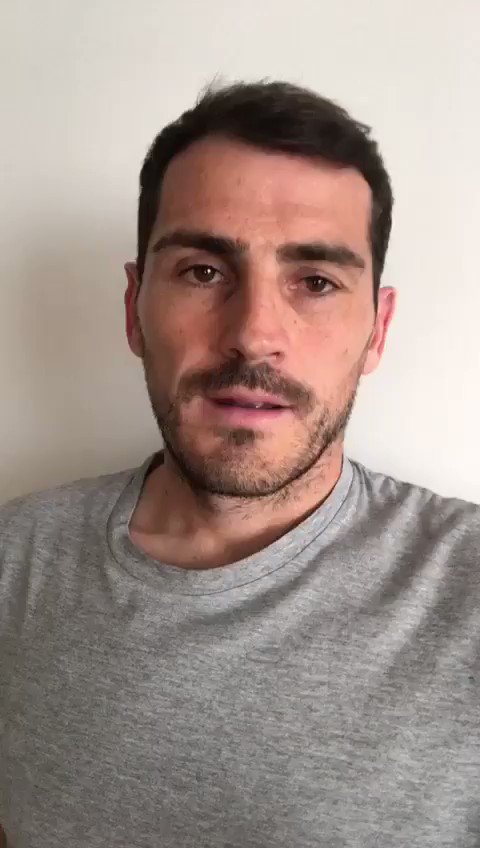 ‘We were training and Iker was doing another type of exercise, so we kept training for another 15 or 20 minutes.

‘But when the doctor told me what had happened around 30 minutes later we were immediately apprehensive.’

Portuguese publication O Jogoreported that all tests and heart analysis carried out to monitor the health of Spanish goalkeeper ‘have been positive’, and Casillas now looks to be on the road to recovery.

In technical terms, the goalkeeper suffered an acute myocardial infarction, but is expected not to have any further complications in life.

The veteran stopper is expected to rest as the season reaches its end, though Porto are yet to give full confirmation regarding what will happen next. It has been speculated the former Real Madrid man will retire from the game.

He had no idea he had suffered a heart attack until he got to hospital, his agent revealed last week.

Carlos Cutropia also admitted the key to the goalie’s survival had been that his health scare had happened while he was training with medical experts nearby.

And he described the fact that the World Cup winner was now back to his normal self in hospital as ‘the greatest victory of his life.’

He told Spanish radio station COPE last Thursday: ‘Iker had an intense training session on Tuesday and another one on Wednesday morning.

‘Halfway through Wednesday’s session he felt unwell and his chest, mouth and arms were hurting. We’re extremely grateful to Porto’s medical team who got Iker to hospital so quickly.’

He added: ‘At no point did he faint or lose consciousness. He felt unwell but he didn’t think he had suffered a heart attack. He wasn’t conscious of what was happening to him. He was only told after his operation.

‘He’s never had any symptoms and nothing like this has ever happened to him. This has been a shock for everyone. He’s been very lucky that it happened where it did and he was near medical experts. If this had happened at home, knowing Iker he would probably have gone to train afterwards and the consequences could have been terrible.

‘The doctors have been excellent professionals and have reacted very quickly. We are obviously very grateful to Porto’s medical team.’

Mr Cutropia admitted he had yet to speak to Iker about his future in top-level football but described him as a ‘fighter’ with a competitive streak and said there was no reason why he couldn’t resume his career when he felt well enough in the future.

He added: ‘At the moment that’s not something we’re worrying about at all. The most important thing is that he’s doing well and smiling.

‘Seeing him like that fills me with so much emotion that it almost makes me happier than when Spain won the World Cup. This is the greatest victory of his life.’

Casillas captained Spain to glory at the 2010 World Cup, conceding just twice in seven matches and keeping a clean sheet in all four knockout games.

At club level, he won five La Liga titles and three Champions Leagues with Real Madrid, having made his debut for the Spanish giants aged 17.

Casillas was associated with Real for 25 years, coming through their academy before a stint in the first team lasting between 1999 and 2015.

He joined Porto after leaving the Bernabeu and was playing at the highest level right up until the recent heart attack – he started both legs of the Champions League quarter-final defeat by Liverpool this season.

According to Marca, Porto are focusing on making sure Casillas can live a normal life after such a serious incident, rather than returning to top-level sport.

Despite his deal running until 2020, there is a strong chance that recent events will bring to a close what has been one of modern football’s most stellar careers.