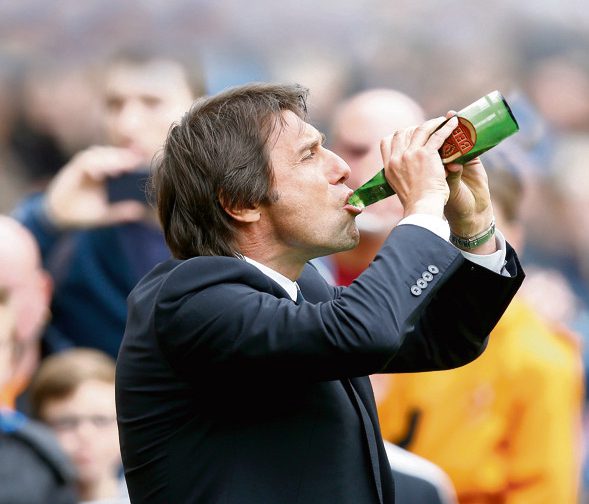 CHELSEA have got the bottle to go all the way this season — by drinking beer after every game.

English football has finally taught the foreigners something, with thousands of pub players up and down the land in heartfelt agreement with the Italian’s policy.

Chelsea’s 12-goal top scorer Diego Costa was filmed by team-mate David Luiz necking a beer in the dressing room after Sunday’s 1-0 victory over West Brom which kept them top of the table.

And Conte said: “After the game, for rehydration, you can drink Coca-Cola, one beer.

“It’s good for recovery. But one. Not a lot.

“It’s good after you finish the game, quickly, not an hour after the end.

“Diego is playing a season in a fantastic way, because he’s showing great passion in the right way.

“That’s very important. I’m pleased for him, for Chelsea, for the fans.

“He’s very focused on the game, to play football and make all the right movements, attack the space — and that’s fantastic for him. I think also that he can improve.”

Conte insists he is excited at the prospect of working right through Christmas for the first time. In Italy they have a brief winter break.

Office party season is also upon us but Chelsea’s quietly ruthless boss is urging his players to pull a cracker with their kids — not when out on the lash with team-mates.

The club is laying on a family get-together and Conte is leaving the responsibility to stay sober with his players — traditionally a big risk.

He said: “I’d prefer they stayed at home and celebrated with the family. 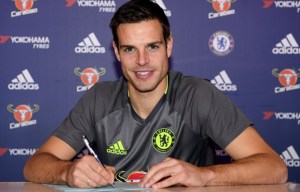 “We’re preparing to celebrate with our families during the week before Christmas, to stay together with our children.

“In this period in Italy there is a holiday. Usually the club organised a party around ten days before Christmas, with the families, to stay together and have a dinner.

“I have great professionals and I know they will have the better attitude and behaviours in this situation.”

Chelsea will match their record 10-game winning streak from 2006 if they beat Sunderland tonight. Coincidentally, it was at the Stadium of Light where they reached double figures last time, with players such as Joe Cole, Petr Cech, William Gallas and Claude Makelele in the side.

Conte says he does not give a hoot about rewriting history, though.

He said: “We all know that it’s not easy to continue to win, but we are working to try and do this.

“I don’t like to think about records or the other situations.

“Every win is important for me because you can take three points and increase your position in the table.”

Defender Cesar Azpilicueta signed a new three-and-a-half-year deal with Chelsea as they prepared to fly up to Wearside yesterday.

Conte said: “Azpi is a really important player for us.

“I think, in the future, he can stay here for many years and become a legend for this club.”