Russell Westbrook did it all for the Thunder with 47 points, 11 rebounds and eight assists. In the end, Golden State’s depth and balance were too much. Stephen Curry and Klay Thompson both scored 26 points for the Warriors.

Emotions ran high throughout the game. At one point in the third quarter, Durant and Westbrook yelled at each other as they walked toward their benches during a timeout. Westbrook said too much attention has been paid to his relationship with Durant. 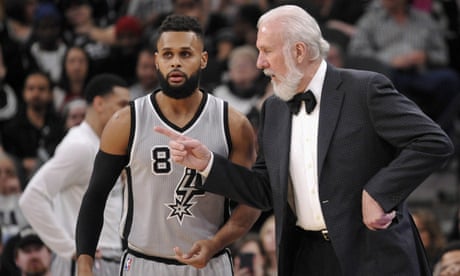 “I do think it doesn’t make sense,” Westbrook said. “It’s over with. He plays for his team, I play with my team. Let him do his thing, I do my thing, and that’s it, plain and simple.”

Later in the third quarter, Oklahoma City’s Andre Roberson fouled Durant hard, and the two got in each other’s faces and were called for technical fouls. “It’s part of the game and I respect that,” Durant said. “We should have just kept playing. I don’t even think they should have reviewed anything. It’s a part of it … all that stuff is just a part of the game. That’s what makes it fun for us.”

The Thunder cut Golden State’s lead to 12 in the fourth quarter before Westbrook checked back in, but the Thunder couldn’t cut the deficit further, and Durant punctuated his dominant performance with a 3-pointer over Westbrook that put the Warriors up 123-104 with 3:39 to play.