Dylan Hartley’s place on the England tour of South Africa this summer is in question after Northampton admitted the national captain’s latest concussion lay-off is a cause for concern.

Hartley has missed Northampton’s past two matches – including the 50-pointthrashing by Saracens on Saturday – after showing symptoms of concussion following England’s Six Nations defeat by Ireland more than three weeks ago. The 32-year-old has a history of concussions and in the summer of 2016 said that another long‑term head injury could mean the end of his career.

There is no time frame on Hartley’s expected return but Northampton have only three matches remaining before the end of a torrid season. In order to feature again, Hartley must pass the graduated return-to-play protocols – which entail coming through six stages of increased training – but the Northampton coach, Alan Dickens, confirmed he is yet to do so.

“Dylan reported concussion symptoms after the Ireland game so it’s one of those – he’ll go through the return-to-play protocols,” Dickens said. “In terms of the focus on concussion now, it’s a concern for all the players. That’s why they’re so stringent in terms of the process to return to play. We’ll do what’s right by Dylan.” 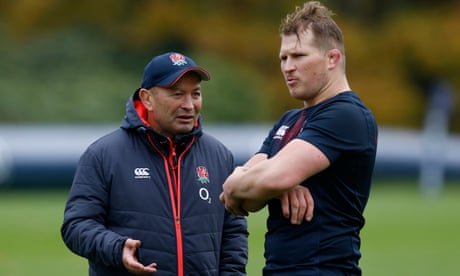 Eddie Jones, Dylan Hartley and the imperceptible art of captaincy

Hartley missed 14 weeks of the 2015‑16 season after sustaining two head injuries, one of them towards the end of England’s Six Nations victory against France in Paris which secured the grand slam in Eddie Jones’s first championship in charge. The hooker has since revealed that he could not remember lifting the Six Nations trophy at the Stade de France and, speaking at the end of that season, he said: “If I got another one now I would be worried. I would probably start looking at other careers or stuff like that, or maybe a long lay-off. Maybe I [need to] look at my tackling technique, too.”

England face a three-Test series against the Springboks in June and Jones will be desperate to have his captain available as he seeks to arrest a run of three successive defeats that led to his worst Six Nations finish. Jones has admitted he is prepared to rest some of the senior players who toured New Zealand with the British & Irish Lions last summer, and he is already set to be without Courtney Lawes and Nathan Hughes due to injury, but Hartley’s leadership would be sorely missed. England have not won a Test in South Africa since 2000 but did manage a commendable 14-14 draw in Port Elizabeth in 2012, when Hartley was captain in Chris Robshaw’s absence.