Eddie Jones apologises for spite on Ireland and Wales

Eddie Jones has been left embarrassed after footage emerged of the England head coach referring to Ireland as the “scummy Irish” and Wales as a “little shit place”.

The video shows Jones giving a talk on leadership for Fuso, the Japanese parent company of England sponsors Mitsubishi.

It was uploaded by Fuso to YouTube in July last year but has only come to light before Saturday’s final round of the 2018 Six Nations when England will face Ireland at Twickenham.

Jones apologised for his comments on Wednesday evening and admitted his choice of words was inexcusable, saying he was “very sorry”. The Rugby Football Union said it would apologise to the Irish and Welsh unions.

In the talk, Jones told an audience: “We’ve played 23 Tests and have only lost one Test to the scummy Irish. I’m still dirty about that game. But we will get that back!

“We will get that back, don’t worry, we have them next year at home, we will get ‘em back!”

Earlier in the talk, Jones discusses Japan Under-20s losing to their Welsh counterparts 125-0 shortly after he took over as Brave Blossoms head coach in 2012.

He said: “Wales. Who knows Wales? Are there any Welsh people here? So it’s this little shit place that has got three million people. Three million!”

In his apology, released by the Rugby Football Union, Jones said: “I apologise unreservedly for any offence caused – no excuses and I shouldn’t have said what I did. I’m very sorry.”

Not only will the footage have caused acute embarrassment to the RFU, but it could also serve to motivate Ireland before Saturday’s St Patrick’s Day showdown.

An RFU spokeswoman said: “Eddie has apologised for his inappropriate remarks, and the RFU is also very sorry for any offence caused and will apologise to the IRFU and WRU.”

England’s hooker Dylan Hartley is expected to be available for selection against Ireland at Twickenham on Saturday after recovering from a calf injury.

Hartley missed the 22-16 defeat by France in Paris that ceded the title to Joe Schmidt’s men, but defence coach Paul Gustard has revealed that the England captain has played a full role in training this week.

In an additional fitness boost, British and Irish Lions wing Elliot Daly has been passed fit as England attempt to deny Ireland a grand slam in the final round of the Six Nations after overcoming a foot injury suffered at the Stade de France. 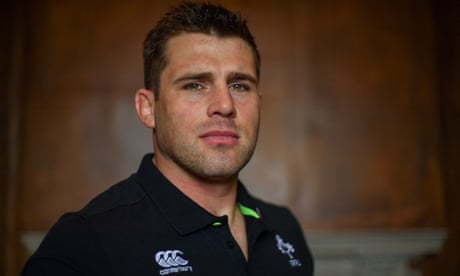 Both will be unavailable for the rest of the season and could also miss England’s summer tour of South Africa in June. Hughes is expected to be out for 12 weeks while Lawes will require about 14 weeks of rehabilitation.

Hughes missed the opening rounds of the Six Nations after suffering a knee injury playing for Wasps against La Rochelle in December.

England – who have had to cope with a back-row injury crisis in the tournament – have called up Don Armand for their final match of the championship against Ireland on Saturday. Armand won his solitary cap against Argentina last summer but Jones has since resisted calls to select the Zimbabwe-born player and previously questioned his work rate.