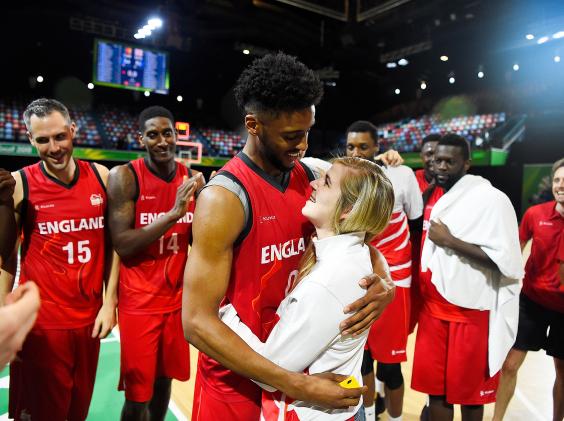 There was love on the court after England’s victory

Jamell Anderson got the ultimate assist from his team-mates as he popped the question to fellow England basketball player Georgia Jones at the Commonwealth Games on Sunday.

Anderson surprised his now fiancee moments after England’s 81-54 victory over Cameroon, a win that was enough to put the men’s team into Round 2 of the competition in Townsville.

Video released by Team England showed the men’s team gathered in a post-game huddle while Jones watched on – having earlier contributed nine points to a 78-51 win over Mozambique for the women’s team.

Jones thought she was there to take a celebratory photograph, but as the huddle broke Anderson was waiting down on one knee.

“I only told them just now,” the 27-year-old Anderson said of getting his team-mates – who include Georgia’s brother Callum – involved. “They initiated the plan really well, so that went perfectly.

“It’s been on my mind for a while, so now I can just play basketball.”

Anderson plays his club basketball for FG La Roda in Spain while Jones, 28, plays for Manchester Mystics in the Women’s British Basketball League.

“I had absolutely no idea,” Jones said. “He told me I was just getting a picture taken. I’m just in shock.”

Anderson had everything planned out in advance, getting the blessing of Georgia’s father Jeff, a former England international and her head coach with the Mystics, before his on-court proposal. 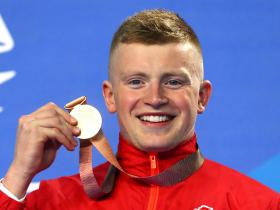 He chose the Commonwealth Games as the ideal venue for a proposal as both players get to represent their country on the world stage at the same event.

“We both worked so hard for this opportunity to be here,” he said. “Basketball is a very big part of our relationship so it just made sense to do it here.”

England head coach Andreas Kapoulas also gave the proposal his blessing, saying: “I’m so happy for both of them, they’re a great couple. I’ve never had a player propose on court before and I wish them so many years of happiness together.”